Some Reflections on Style at Downstage

We could begin at the beginning with a definition of acting technique. Fraser's Kleines Organon. But attempting to define the indefinable hasn't much appeal. Besides, the prescriptions for the theatre already in print are various, conflicting, and as impenetrable as the Cabbala. From Stanislavski to Grotowski, from Artaud to Brecht ('the whole gamut, from A to B'), along with a veritable Aberfan of doctoral and post-doctoral glosses. Some of them should come packaged with an Arts Council warning: 'The Council has determined that prolonged immersion is dangerous to the spleen'.

In the theatre there are few absolute standards. Hazlitt described John Philip Kemble as 'a petrification of sentiment, that heaves no sigh and sheds no tear; an icicle upon the bust of tragedy'. To the same critic, Edmund Kean was 'the first gleam of genius breaking athwart the gloom of the stage'.

And while the writers grapple with definitions and theories, the actors themselves seldom offer any help at all. Their methods of work remain as private as their sexual habits or religious beliefs.

'The English have always needed a circus and a bogeyman to keep them happy. For the past few years the theatre in this country has provided them with both' - a harsh judgement from John Whiting, more than a decade ago. With Downstage's Candide last year I became convinced that they had sold out to the fashion for theatre as circus. We had clowns and acrobats going through their paces before the show started. Mechanical seagulls appeared from above. Actors appeared on lifts from below. Brightly-coloured cows and sheep frolicked, Disney-like, in artificial flower beds. Voltaire's astringent exploration of the vanity of human desires was subordinated to the whims of the ring master. 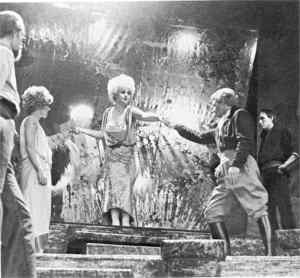 'All that is fine in the play was lost in the representation. The spirit was evaporated, the genius was fled; but the spectacle was fine: it was that which saved the play. Oh, ye scene-shifters, ye scene-painters, ye machinists and dressmakers, ye manufacturers of moon and stars that give no light, ye musical composers, ye men in the orchestra, fiddlers and trumpeters and players on the double drum and loud bassoon, rejoice! This is your triumph; it is not ours'.

Hazlitt, again, writing about an 1816 production of Midsummer Night's Dream at Covent Garden.

Downstage faced some extra problems with Candide that Hazlitt wouldn't have contemplated. In order to handle Leonard Bernstein's notoriously difficult score they cast singers rather than actors in the leading roles. Other parts, which demanded some musical skill, were consigned to actors. The singers sang well, with some exceptions. The actors acted well, with some exceptions. But we were left, at the end, with some actors who couldn't sing, some singers who couldn't act, and some members of the cast who could do neither. The enthusiasm of the players (and Downstage's promotions people) was hard to resist, but the human achievement was dwarfed by the relentless gimmickry.

Was there a sufficient array of talent available to do the job properly? Maybe not. Elric Hooper (Act, May 1978) sheets the problem home to some flaws in basic training. 'There are some genres in the theatre, like musicals, that demand special skills. Alas, too many of such works are dominated by the do-it-yourself syndrome and "I'll have a go" attitude. So we see musicals with people who cannot sing or dance, and Shakespeare with people who have not the faintest inkling about verse forms. Our actors lack application and the desire to make difficult skills look easy. Once again, we are a bit too tolerant of the dog dancing and not dancing well.'

At Downstage, in Candide, that meant being upstaged by seagulls. Theatre as circus in Candide. But not all year. Downstage's 1978 Shakespeare jamboree, Fancy's Child, represented a move towards a conscious playing style. A glittering and controversial production of The Merchant of Venice, an enthusiastic Youth Theatre Workshop account of Romeo and Juliet, and a production of Edward Bond's Bingo, a play about the last months of Shakespeare's life.

The Downstage Merchant was a provocative statement, with none of the coyness which disfigured Othello a year or two back. The programme for that production included a note to the effect that they were intent on playing Othello the way Shakespeare wrote it. Madame Arcati was, presumably, recruited to find out exactly how Shakespeare wanted it played. It seemed to me that this caveat in the programme was an attempt to evade the duty of each age to recreate for itself, to assert its own style.

None of that in the Merchant. Penetrating insights into the nature of power and the possibilities of justice took their place alongside readings that seemed perverse merely for the sake of it. The coda between Lorenzo and Jessica (How sweet the moonlight sleeps upon this bank) was breathtakingly nasty, the producer's long-bow drawn here almost to breaking point. Downstage's Merchant begged as many questions as it answered. Assuredly not for the purists, it nevertheless allowed me a fresh angle of approach to a work I have never found especially compelling.

Although the Downstage reading was frequently quirky and inconsistent, some fine performances ensured a consistency of production style. There was a glittering display from Ginette McDonald, whose Portia was an emblem of jaded luxury, a tinsel tart in a Belmont located somewhere deep in Beverly Hills. This Portia spoke a language so shoaled with irony that it became almost its own sub-text. 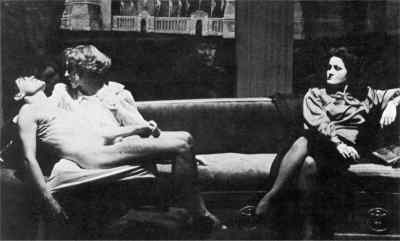 John Callen's Shylock, eternal petitioner and public nuisance, whinged vainly for his rights in a world where power had long ago supplanted justice. Callen fleshed his Shylock out with a stoop (carefully designed to protect his vitals from the omnipresent jack-boot) and a lifeless nasal whine. Not a virtuoso Shylock, but a fit object for compassion in a world where the Jew is beaten before he starts.

Hardly surprising either, in this very camp milieu, that Antonio (Lewis Rowe) should emerge as a Diaghilev figure. The nature of his current relationship with Bassanio remained obscure in this Downstage Merchant: but my guess is that they met one afternoon while cruising the Rialto - waiting for the boat to come in, like everyone else in Venice.

'Camp' is perhaps the key word. I found a lot in the Merchant to admire: but the reading was spoiled for me in the end by its campiness. It was the same problem a year earlier with Downstage's production of Love's Labours Lost. From the very start in that production it was impossible to believe that the lords of Navarre had given up anything very much in forsaking the company of women. They still had one another!

If the acting in The Merchant of Venice was generally even and satisfying, it was the product of firm direction and an imposed style. Those sound like the ingredients of an autocratic 'Director's Theatre'. So they are. But they are also indispensable where actors are young and inexperienced (and Downstage's actors are mostly young, even where their experience is out of all proportion to their years). The hiatus between student or apprentice and mature actor is a critical one. Young actors have defence mechanisms, which their training should have begun to peel away. But they do not customarily have the sense of style we confront in the competent mature actor. (Nor have they accumulated the bags of tricks which are the stock-in-trade of so many older actors, thank God.) It is the director's challenge to provide a context which is not a straitjacket: to harness the actor's energy and freshness of vision, without offering a totally free rein.

Direction at Downstage is not always firm enough (or am I really about to argue that it is too often firm but wrongheaded?).

Examples: Catherine Wilkin, who is a fine actress, was permitted to turn-in a - superficially-observed and excessively-mannered performance in Heroes and Butterflies. Michael McGrath's account of Neil, the fancy dancer in Hall's State of the Play, was strident and self-indulgent where the whole tenor of the production seemed to demand something less flashy and less stereotyped. In these, as in a number of other displays at Downstage, what we have missed is a sense of centre. Too many characterisations are not integrated into the production - not even integrated within themselves.

There's an obverse side of the coin. Downstage has been willing to take risks with many of its young actors, as part of a process of nurture. The burden of the risk-taking is heavy. Some productions overbalance as actors oscillate in search of the right key: or as they try to reconcile the heady imperatives of performance with the more sober demands of discipline and a search for truth. When the risks payoff the results are exhilarating. Ann Budd in Summit Conference, Stewart Devenie in Travesties, both achieved their effects with that crisp economy of means which is the hallmark of the actor who has arrived. Faced with acting of this quality it is easy to forget the lengthy process of fruition which came before... much more seductive to see the actor as a fully fledged creature who has sprung like Athena out of Zeus's forehead.

How many performances have to be off-beam before an actor can manage something definitive? Obviously, that depends on the actor. Downstage, at least, has shown that it is prepared to bear the cost of the development.