The story so far
In late 1977, Tom McCullough comes to New Zealand. He is director of the Mildura Arts Centre and the Seventh Sculpture Triennial - the biggest Australian art event in 1978. McCullough enthusiastically selects a group of contemporary New Zealand-based sculptors to show 1 to 3 works at the Triennial. 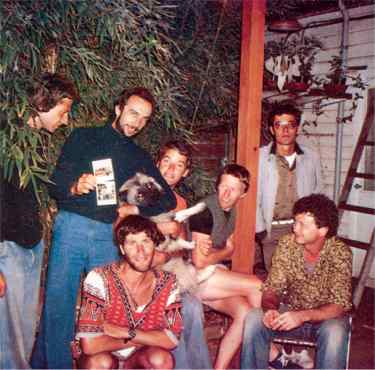 Of the 17 artists who send works to Mildura, 7 fly over to do performances and installations. Some artists don't reply to McCullough's invitation; some forget; others can't believe it's happening to them. But 17 actually come up with 'the goods'. Only one artist is a woman. (That's 'the art world' for you!)

Negotiations with the Queen Elizabeth II Arts Council mean that they fund the artists' air-fares and air-freight; and in return McCullough selects the artists for a New Zealand national tour of recent sculpture - a long-awaited event.

The Seventh Triennial
Easter 1978 and the seven New Zealand artists do their performances, installations, talks, and establish a strong dialogue with Australian artists. The general feeling from the host country is: 'There's a lot of interesting work being done across the Tasman. . . we'll have to keep in touch'. 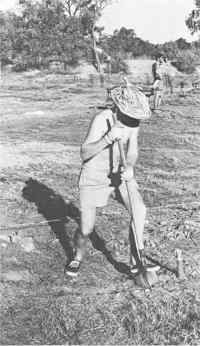 Hamish Keith describes the New Zealanders' presence as making 'considerable critical impact in Australia'. Press crits., art-talk and gossip reflect this. Some of the 7 New Zealand artists do workshops, talks, performances in other cities. The dialogue strengthens.

A message from the sponsors
This is the first indigenous show of its kind to tour New Zealand, and the first, sculpture show to tour in over a decade. The 48-page large format catalogue (well illustrated) contains introductions by Hamish Keith, Tom McCullough, an essay by Wystan Curnow, as well as statements by artists and a lot of background information. A small booklet is also included, presenting the seven artists' views and thoughts about the Triennial. The booklet is widely distributed throughout Australia to keep the dialogue going.

PAUL CULLEN
Notes in passing/or arriving (in the dark). One felt somewhat in awe of this small city and the vast amounts of artistic and organisational energy it has become focus for in the course of its Triennials. A focus too for the exchange of ideas, the diffusion of influences.

In content an exhibition of considerable range, almost an historical appraisal of the last fifty years rather than a selection of works from the last three. Indicative I suppose of the persistence of more conservative styles of working and of the organisers' intention to show a broad spectrum.

PHILIP DADSON
At Triennial time the Art Centre and the town are two very contrasted spheres of operation. The Centre has a buzz and a better head of steam than most city galleries. . . the town's like a country cat hosting city fleas, somewhat scratchy.***Before I left home I did a browse through the local library swatting up what lay ahead and was amazed to find in the guides to Aussie pride Mildura hailed as famous for its sculpture exhibitions along with its grapes and wine. .. and started putting two and two together.

Andrew Drummond, direct from a nudity rap in Christchurch, and I arrived in Mildura to a hot meeting between exhibiting artists and councillors discussing council threats of censorship and control if the artists didn't play to rules... no nudity, no pornography, no bloodletting. This, the local wine, and Terry's Redhead pitched the atmosphere for the week ahead.

ANDREW DRUMMOND
One Sunday, Tom McCullough, Roma and I drove into the country in search of a water drum. Side-tracked after a discussion about local ritual sites, Tom headed across country to a dried up lake, once the site for aboriginal rituals. We found, along the banks of the dried up lake, strange scarrings on the trunks of trees. The scars had been produced to provide flat surfaces so pigments could be applied during rituals. Today the pigments have gone and the scars stand as subtle space dividers amongst the almost undisturbed environment. When I stood back and looked at this site the scars stood as markers pointing out the structure of the ritual site and the beauty inherent in that space.

JACQUELINE FRASER
The opening day was a real circus with a Punch and Judy show to keep us children happy and most of the work finished for display. I felt a closeness to the other artists as the Public traipsed around the 180 sculptures in a faceless fog. Everything merged into a common average and I could see a satisfied complacence with work that once shocked at earlier Triennials. I know that few of these people would ever last it to my far-away gum tree. Mildura became a mob of people gazing at a strange phenomenon away from the forty-hour week and mortgage payments.

MATTHEW McLEAN
Holding the sculpture exhibition in Mildura is not without problems. Many members of the town Council are opposed to much of the avant garde work present, on the grounds that it is not understood by most of the local population, whose public facilities are used to house the Triennial. Yet it is the quality of newness and experimentation that is the lifeblood of art, and the reason most artists attend. Street standards for censorship apply also against obscenity, which prevented my performing naked, as was my intention.

GRAY NICOL Going to Mildura rather than sending work was far more useful, and very worthwhile, especially in view of Tom McCullough's intentions. 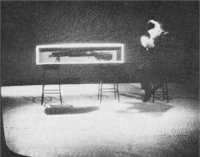 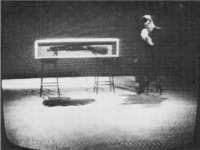 I'm trying perhaps to survey what's being done, and perhaps give a few pointers in a few areas, and to bring people together. I think that really is what our only service is to sculptors, who have one man shows or group shows in their own cities; to see the whole of Australia in one form or another and (to see) a section through it here together, juxtaposed, is the whole point of the exhibition.

The location raised some problems, or rather issues of interest, not perhaps to those who work in areas principally concerned with materials, but to those involved with more open systems, social/ environmental concerns or didactic means. Having a temporary community within a community produced some confusing tensions.

DAVID MEALING As a lever for self-critical examination the Triennial proved a very useful confirmation of established attitudes or the traces of an alternative policy via public discussion. 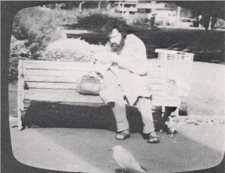 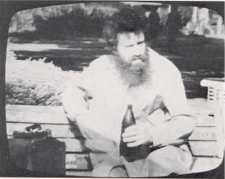 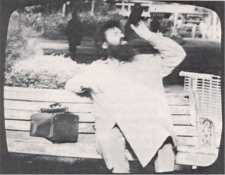 An extension of this mode of thought about art that aims to change the way we live, never surfaced at Mildura. There are now two clearly defined camps. There's the traditionalist defending art for art's sake and there's his opponent, the radical, on the attack for an art of social meaning and political effectiveness.

This is the true root of the current crisis in art. It's a crisis of function: who is art for, whose interest does it serve? From that follow all other symptoms of crisis: doubts about the justifiability of the activity, defensiveness about 'freedom of expression', perplexity even about What To Do.

The most depressing thing about Mildura is that it shows that a larger number of Australian/New Zealand artists working in all media did not feel the need to confront these problems and survive these doubts. Much of the traditional imagery was represented at Mildura. It was there either because it was already known to the selector, or because it was. submitted by the artist, or both. The products of the avant garde (performance) enforced the feeling of obscurantism and remoteness from social reality.

NICHOLAS SPILL
At the Triennial a lot of the objects dealt with formal concerns that were worked through in the '60s and early '70s. A lot of this was basically ineffectual. It alienated an unknowing general public and left them feeling cheated and it certainly lent some disillusionment to those dedicated enough to come hundreds of kilometres to look at the show. 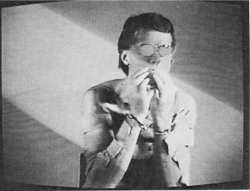 No one expects extraordinary innovation all the time. That is not possible. A few pieces were impressive though because they were intelligent in their own historical and physical contexts. But they too were the exception.

At Mildura there did surface a very real concern that the art on display, in total, was not reaching the public and in order to be a reasonable and effective force in a future more just society, art had to have some relevance and meaning to a wider public.

Many real issues concerning the future and function of the visual arts in society surfaced at Mildura. By far the most important aspect of the whole gathering was the human contact, the dialogue that precipitated much flow of information, and a warm sense of continuing exchange in ideas and" friendship.

Meanwhile back home
The New Zealand sculptors at Mildura exhibition weaves its way down the North Island to finish its 8-gallery tour at the new Hocken Library building in Dunedin, November 1979. 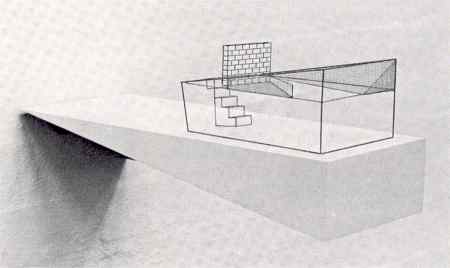 
Tom McCullough resigns as director of the Mildura Arts Centre. As they say in gangster movies: 'things were getting too heavy'. The local council that funds the Arts Centre has become too visibly unco-operative.

But McCullough has produced a 120 page follow-up publication to the Triennial. Crammed with critiques, photographs, press-clippings and opinions, it's called Exhibition Exposition. Once printed it is to be distributed free. 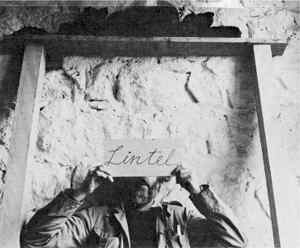 Exhibition explosion of February 1 1979
A cyclostyled letter from the Mildura City Council goes out to artists/curators/ directors / critics around Australasia. The letter states that the Council has resolved unanimously to destroy the publication Exhibition Exposition. 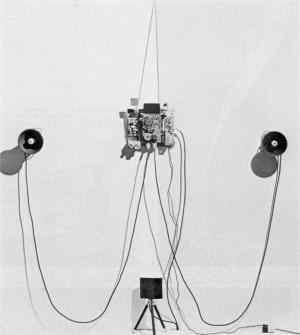 Reasons given are... 'Certain of the contents. .. open the Council to legal risks. ..' and'... because the overall standard of production was considered. .. unworthy of preservation in amended form.'

The publication was jointly funded by the Australian Visual Arts Board and the Victorian Ministry of the Arts. It was not the legal property of the local Council.

The Mildura City Council's motto reads: YE SHALL KNOW THEM BY THEIR FRUIT. 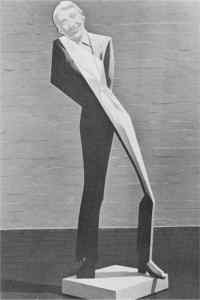 The trans-Tasman tie-up revisited
April 12, 1979 sees the opening of the Third Sydney Biennale. Its theme will be: 'Dialogue with Europe'. As it promises to be the event of 1979, artists, critics and curators will be flying in from Europe and the United States, together with a contingent of Australian artists featuring a 50/ 50-equal representation of male and female artists. 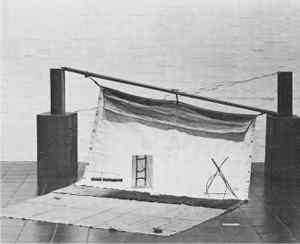 Only 2 New Zealand artists - Philip Dadson and Bruce Barber - have been officially invited to participate: but that is another story (see the Letters column in this issue)

The alien invasion from Enzed
Ian Hunter at the National Art Gallery (with strong Oz-Enzed liaison from Terry Reid in Sydney) is organising a 40-seat block-booking with Air New Zealand to the Biennale. The Queen Elizabeth II Arts Council is subsidising these airfares; as well as funding a New Zealand Art Embassy to co-ordinate visitors, venues for alternative programmes, events, installations and accommodation. .

The Arts Council will also be producing a large-format publication illustrating recent New Zealand directions in video, sound, dance and visual art-works. This will be distributed free in Sydney. 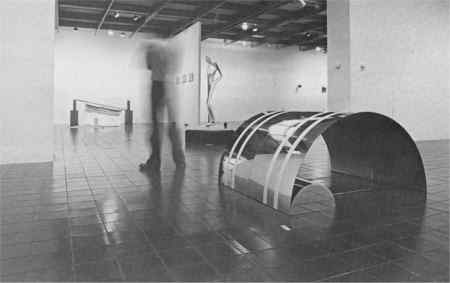 A video package containing some of the best of the 1970s New Zealand artists on video-tapes will be flown over to plug into an extensive International Video Encounter - just one of the many events to run concurrently with the Biennale.

Wyston Curnow is to tell all about the Biennale in a forthcoming issue of Art New Zealand.

And much later
The groundwork is now being laid for The Big One in New Zealand, 1981 . . . a large international encounter based around the visual arts, with a large influx of overseas artists - especially our closest neighbours. 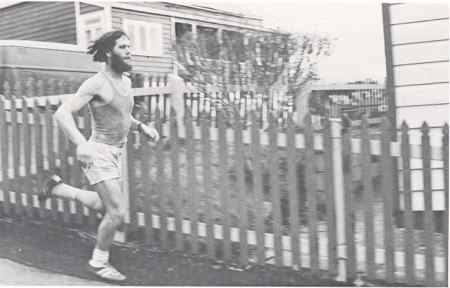