In the history of New Zealand painting one can find little, if any, humour. Few New Zealand painters seem to have had the ability to laugh at themselves or at their work. Dick Frizzell, perhaps due to his initial training as a graphic artist but more probably due to his own ebullient sense of humour, is one who has been able to escape the prevailing self-consciousness. Although a little of the clumsiness persists, his work has a fresh wit and grace which is, unhappily, rare on the local scene.

One got the impression from Frizzell's recent Putting it all on the Lion show, however, that his escape is more conscious, that his defiance of convention and the jaded is more intentional than before: it seems to have become almost a crusade. 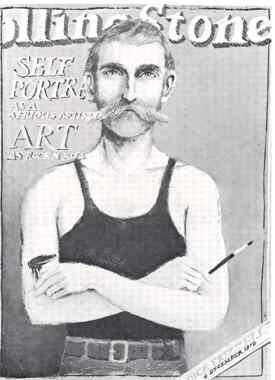 Putting it all on the Lion was not a landmark show in the way that Frizzell's retrospective A-Fishial at The Barry Lett Galleries in March of last year was: but it was all new work and it outlined his development since then. There was a maturation of Frizzell's approach - which is sufficiently estranged from the commonplace in New Zealand painting to allow him to pursue his own line unhindered. That line traverses fields which have been crossed before, but not quite in this way, and never in this country. Perhaps Frizzell's universality is his greatest asset. His is a powerful approach on a grand scale, refreshingly divorced from landscapes and 'the New Zealand way of life'.

Putting it all on the Lion was a collection of fifty-two paintings and works on paper, thematically linked (as the name suggests} to the lion image (either directly or indirectly via jungle, tropical and comic-book associations). Frizzell's own leonine appearance, and his zodiacal sign, leo, were starting-points for this series of portraits as lion, with lion, and in the jungle context. His two main sources of inspiration - early naive Christian painting and the modern comic-book image - are never far below the surface and can be easily recognised: but they are sufficiently mixed and overlaid with small esotericisms to make each work an original offering and an interpretation rather than a derivation in the Pop tradition. The line between source and derivation is a fine one and in a handful of works the artist crosses it to produce something wholly derivative - as in the three Good Luck Angels, whose pre-Renaissance serenity is nonetheless tarnished by remnants of Frizzell's interest in labels.

The Good Luck Angels are a telling example of Frizzell's change of direction: no longer iconoclastically destructive, he now seems satisfied with icon parody. Much of the anger has subsided to be replaced by a drier, but more sympathetic, humour. Here I Give Thanks to The Phantom is another charming piece of wit. It is a diptych showing Frizzell in safari outfit and pith helmet about to shake the hand of The Phantom amidst lush jungle foliage. The 'Thanks' is obviously for The Phantom's positive influence on Frizzell's recent subject-matter, and no doubt equally for his influence on the style. Frizzell throws in an aside by light-heartedly using a title convention in the most literal way: an earlier and more traditional recipient of thanks being Mondrian in a 1961 McCahon. The parody is far more effective than the visual assault of Frizzell's earlier work (such as the seven Life Goes On panels exhibited at Peter Webb's in March of last year) because it works at a less conscious level; the assault is threatened rather than felt. 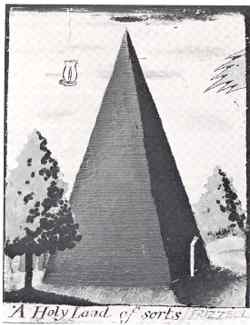 DICK FRIZZELL
Holy Land of Sorts
enamel on board

Frizzell's technique has changed little, though it is more refined and accomplished. The tertiary colour persists, as does the glossy enamel paint-skin: but these are technicalities which, though mastered with apparent ease, are secondary to the major change of the removal of the openly aggressive element. Technically Frizzell is very strong - a sound base on which to support his experiments with subject, both in enamels and in the more ephemeral media on paper which comprised half of this exhibition. These were an important part of the show; a valuable insight into Frizzell's method and madness, and a clue to some of the witticisms and esotericisms of the finished works. They were just as valid and as powerful as the enamels; and in some of the studies, whose spontaneity was lost or weakened in the finished works, more so.

Of course, other faults could be found in Putting it all on the Lion - as many as in any other show: but they would be minor. What faults there were only contributed to the atmosphere of conscious naivety and were in no way injurious to the show as a whole. Frizzell's contribution does not lie in his colour or his line, or any other single element: it lies in his sense of humour, his lack of pretension and his ability to laugh at himself. Hopefully that ability and its attendant spontaneity will prove infectious.