Te Papa's exhibition dedicated to New Zealand culture in the 1970s offers a cosy art historical account of the period. A range of expected artists is set up as reflecting dramatic social change. Wild Clairmont is tagged to drug culture, earnest Brown to conservation, and, of course, Robyn Kahukiwa's Ko wai au? represents the problems facing contemporary Maori. Kahukiwa's searching question is echoed across a generation and the harbour in Kelcy Taratoa's Who Am I? paintings at the Dowse. 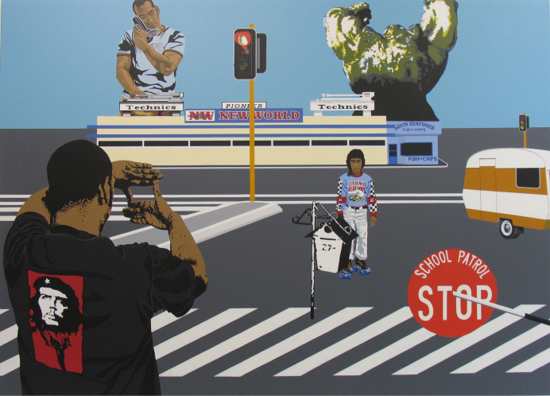 Taratoa's graphic figurative style and use of iconic 'kiwi' symbols would not look too out of place in Te Papa's exhibition, especially next to the hard-edged social criticism of the decade. But he offers a very different experience of the conditions to which these artists responded. The paintings function as imaginative reconstructions of Taratoa's past, particularly addressing his experiences of growing up Maori in the modern urban environment.

Taratoa has developed a blend of self-portraiture and social criticism to represent these experiences, allowing him to stand both inside and outside the work summoning, acknowledging and working through the key factors in his life. Attention is firmly drawn to the sterility of the urban environment and to the total absence of any form of Maori culture, issues foreseen in Kahukiwa's work. Indeed the recurring image of a wide-eyed childhood version of Taratoa could have stepped straight from one of her paintings.

The parade of comic book figures, particularly of the outsider, alienated variety suggests what entered the void left by this absence of Maori culture. These paintings, however, are not a droll listing of pop culture influences. They present a fusion of all these sources and forms. The bold graphic style and the illogical, game-like spaces the paintings envision nod less to those art historical sources than to graf, television and comics. Each painting comes with a unique soundtrack, combining beats, spoken word and documentary snippets. Again Taratoa is not interested in simply acknowledging the importance of music, but in finding ways of intertwining the acts of looking and listening crucial to the processing of the world. Sampling crosses over as a dominant strategy, used in the soundscapes, but also fundamental to the ways the paintings are organised, structured and presented.

While the dominant theme of Taratoa's exhibition stresses the negative impact of his childhood alienation and cultural dislocation, the complex form of these paintings demonstrates a more positive outcome of these experiences. The paintings embody the classic bind Taratoa shares with his revered comic book heroes where alienation provides both a source of anguish and of power to act upon the world.

It is not surprising that Natalie Robertson has become drawn to the trickster archetype that occupies many mythologies as both cultural symbol and provocateur. Her practice, which seeks to operate between and across modes of cultural knowledge and exchange, often through recourse to various forms of visual and conceptual trickery, already shares much with the elusive figure.

Robertson's recent exhibition at the Bartley Nees Gallery developed out of research into the history and function of Trickster, and is directed at further complicating the relationships between artist, subject and audience her work always keeps firmly taut. A secretly filmed video of a neighbour destroying Manuka forest is explained as an act of carving up the land analogous to that of Maui's brothers, trumped in turn by Robertson's documentation and presentation of the footage in a gallery. A series of photographs capturing the shape shifting movement and patterns of breakdancing twins offer another manifestation of this trickster methodology through representation.

A pair of looped videos tracing a Canadian road trip undertaken with North American Indian colleagues best characterises the approach. Here Robertson's 'tracing the landscape' devices are played out on a journey through a physical and cultural landscape other than that of Aotearoa. Road signs racing past the windscreen, the illuminating flash of headlights and the passenger /backseat perspective all connect to her earlier photographic series.

But Robertson's use of video to capture what is a collaborative journeying process, focusing on the communal singing of journeying songs, emphasises that her terrain between cultures has taken a different turn. Robertson joins in with and records the singing of one song invoking local ancestral connections. That Neil Young wrote the other recorded song from a Native American perspective, considering settler wrongs via Pocahontas and Marlon Brando, indicates the interesting and complicated cultural terrain Robertson navigates her new work through. 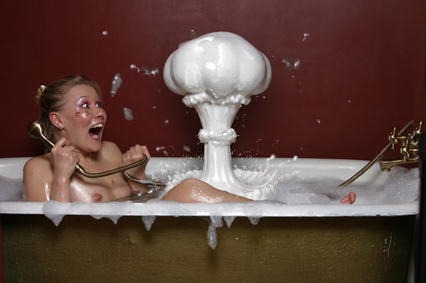 Estonian art groups Avangard/Pink Punk brought their own mode of cultural exchange to Enjoy and the streets of Wellington in early March. Their digital projection work The Bomb loops images of a model mushroom cloud situated in a variety of settings. This mushroom cloud as souvenir object is located in the seemingly most inappropriate of places such as in front of war memorials and embassies. It is also seen in the most absurd of locations, emerging out of an occupied bath and erupting from the suitcase of artist Margus Tamm as it is inspected by customs officers.

This use of slapstick to diffuse an image of terror would operate almost anywhere as a parody of the hunt for weapons of mass destruction. Exhibited here, it serves as a twisted cultural exchange between two countries whose history and identity is bound up with very different relationships to the nuclear threat. 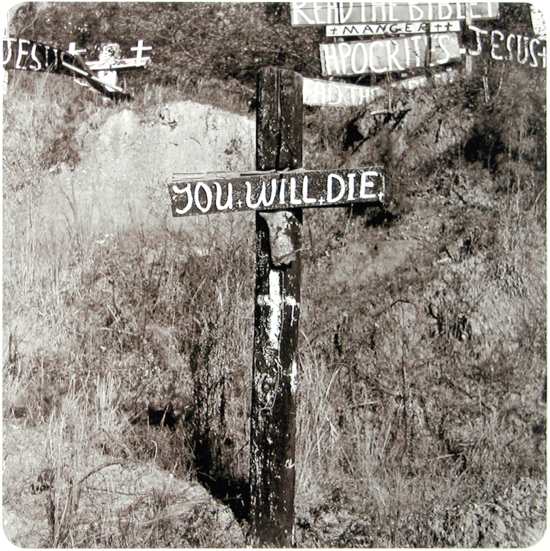 The look of shock on the faces of all who encounter the bomb within these constructed scenes is clearly intended to transfer to those outside of the projection. It is both alarming and amusing to see the bomb treated with such irreverence and humour, especially by artists who grew up under the very real shadow of nuclear devastation. A solemn response, in line with the evocative memorial music accompanying the projection, would be more instantly palatable as some sort of soul-searching artistic exorcism of the past. But it is these very expectations of the function of art, its responsibilities to history and role in society that the riotous actions of these groups seek to overturn. What may at first look like a gimmicky one-liner quickly asserts itself as a brilliant reworking of the artists' cultural legacy and baggage.

Andy Irving's practice, directed somewhere between art and design, and based on the scavenging and refashioning of once functional materials, appears to underpin The Chamber Of Doom at the Christopher Moore Gallery, a small group show he had a strong hand in organising. There are contributions from artists and designers, and broadly speaking two dominant responses towards its loosely pitched B-grade/horror theme can be traced along those party lines.

The recurrent use of found materials indicates a concern with exploring and manipulating the power invested in and emanating out of everyday objects and spaces. Francis Tunnicliff plays the psychic, with the aid of an old photograph channelling the energies absorbed into a found chair. Johanna Sanders's exploration of the conventions of the genre as a cultural readymade represents the other dominant approach. Her video still Hi Gothic, a parody of the stock genre image of woman in a graveyard, pulls in the opposite direction to Tunnicliff by draining all the menace and gravitas from what should be an image of high horror. 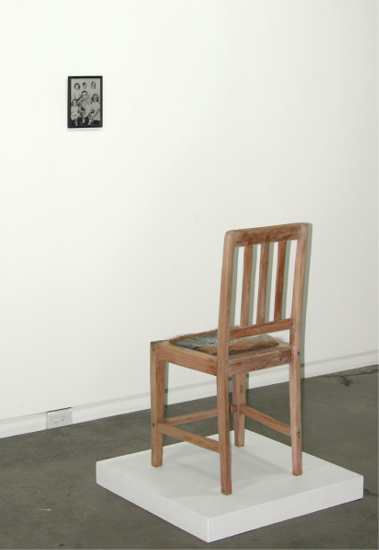 Nicolas Twist contributes an eerie photograph of a homemade cross scrawled with a warning of death, a found object that holds all the visual impact he seeks to marshal in his practice. Other artists toy more freely with these concepts. Bryce Galloway's schematic mind map shows that while he has horror on his mind, it jostles for attention with other pressing concerns: critique, discourse, modernism, and other pedestrians.

Galloway's work highlights the key aspect of the exhibition. It is less the tightly-focused themed show it almost transforms itself into, than a sampler of connected practices in a dealer gallery. One suspects that if these artists did produce such, an exhibition it would be much dirtier and noisier than this outing. Beyond Tony De Goldi's fur-lined gas mask hanger armed with prosthetic hands, and Shin Hyun Mu's painting that drips onto the floor, everything is very well behaved. Despite this level of politeness, the inner chamber of the Christopher Moore Gallery was certainly enlivened for the run of the exhibition. 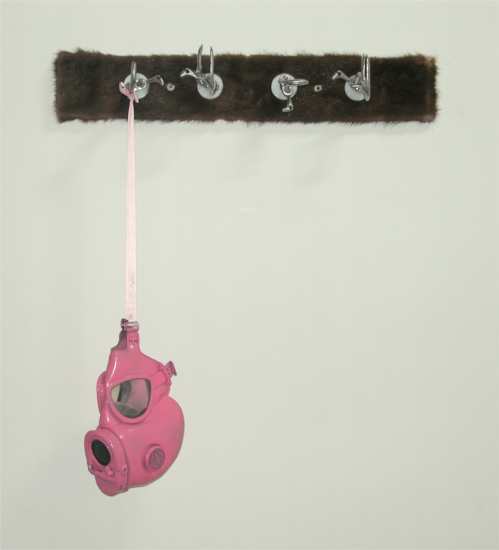 The gallery only represents Twist and Irving. Other recent dealer group shows have utilised this format and presented a similar makeup of brand and handpicked non-represented Wellington artists. As with this exhibition, these artists are normally connected to the various art schools and are generally seen in the alternative spaces and the Michael Hirschfield Gallery. Wellington's newest dealer gallery, The Mary Newtown Gallery, predicated on tapping into these possibilities, staging themed group shows of underexposed Wellington artists.

It would be foolish to suggest that this activity reveals some sort of growing confidence in or co-option of the much discussed 'Wellington scene', or that this exhibition represents a significant shift in local practices. While it is indicative of an exhibition format we are seeing more of, it is quite possibly a throwaway space filler. But even so, it sure beats the dreaded stock show. 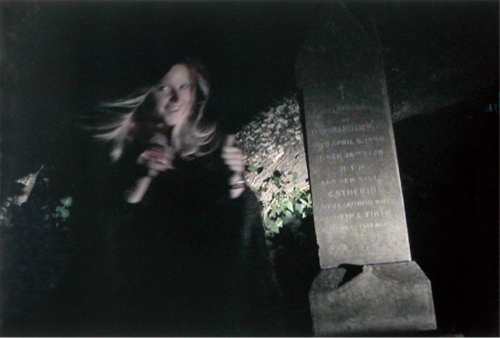