Lyn Plummer's installation Cantata: A Play of the Trace II at the Hocken Gallery reminds the viewer of the institutional spaces in which one works and lives. Entering the Hocken Library one has to move through the main entrance and up stairs to access the inner sanctum of the gallery. The viewer is conscious of walking into an institutional environment that dictates order through categorisation. Then, on entering the gallery, the viewer is immediately confronted with a controlled and ritualised space, an ordered display of structuralist binaries: pleasure and pain, life and death, darkness and light. A collection of mitre-shaped offerings line the gallery walls in a series of precision-orientated lines distributed at equal distance. 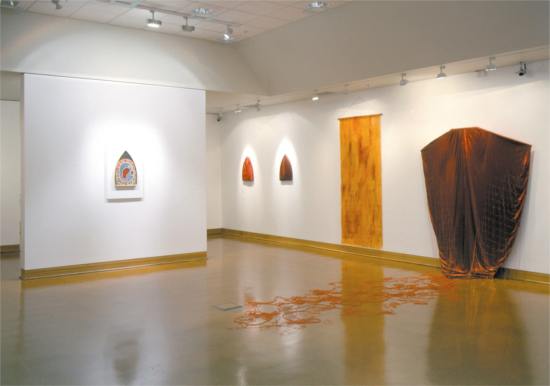 LYN PLUMMER Cantata: A Play of the Trace II at the Hocken Gallery (Photograph: Rodney Browne)

The space evokes the museum in its apparent archiving and display of skins that lay bare a series of inflictions. Skins are stretched, pierced with pins, ripped and scarred. In contrast, skin is presented as erotic folds of luxurious textiles, shimmering threads, smooth and translucent layers, bejewelled and tantalising lacework and soft downy areas of hair, fur and feathers. The viewer is made acutely aware of a desire to touch these inviting silken offerings, while at the same time being made conscious of a sense of restraint and self-discipline. Pleasure and pain are inseparable in the work as some may say that the experience of extreme pleasure is achieved through first experiencing extreme pain.

Desire and its resultant pain is meticulously controlled in this exhibition. Pain itself becomes ordered through a series of strictly proscribed skins. The skins' inflictions are not accidental or random, but appear to be carefully planned and executed within patterns and repeated texts. These texts are only decipherable in places and thus they leave the viewer to contemplate voicelessness or a language which is for the most part unheard, although it is partially understood as it rises from the surfaces of scarred flesh or flows sensually under a veil of white diaphanous fabric. The idea of voicelessness is supported by glimpses of faceless and headless female figures present in body only as objects of desire.

At the same time, restraint is reflected in the ordered pleasure evident in the making of the work. Time and care has been taken in the application of paint and the braiding of hair. Time's passing is evident over the entirety of the installation and the viewer is reminded that life is short in the natural progression from birth to death. This is reinforced by a repeated reference to blood as a precious life-giving fluid which flows in abundance from the surface of the works as red thread forming artery-like networks on the gallery floor.

A mitre work entitled Bear Witness features shimmering red fabric with an engorged, swollen centre slash that references female genitalia, desire and bleeding. The spilling of blood is most naturally a result of that which is beyond our control. In this exhibition, however, blood is coagulated and it brings to mind the experience of pain through sacrifice, punishment and atonement. Even the spilling of blood is carefully ordered within the geometrical formats chosen. Here redemption is achieved through institutionally controlled penance flagellation and prayer.

At the Dunedin Public Art Gallery Seraphine Pick's new work, He (Disappeared into Silence) 2004, features as part of Hotbed, an exhibition of the gallery's contemporary collection. A hotbed is a bed of earth heated by fertilisers that stimulates new growth. Seraphine Pick describes herself as an "image scavenger" who works intuitively. He (Disappeared into Silence) definitely fits the bill of new growth for the artist and in interpreting this literally the viewer is immersed in a vibrant green jungle of succulents and exotic, ravenous, flesh-coloured flowers. This green, lush jungle is wild and uncontrollable and its growth is fresh and insistent. The work is large (two canvas panels jointly measuring 1500 x 2400 mm) and this adds to the abundance encountered through the work. 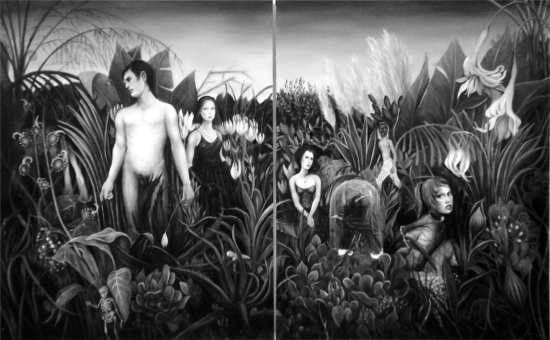 Differing from past works, there is less of an ethereal quality in this work as the figures are very much grounded rather than appearing to float or to be disassociated from the flat background plane. In fact, here figures are so grounded that they appear to have sprouted from the ground and to be part of the jungle itself. A figure of a woman in the right hand panel crouches down, her skin is stained green and her hair is bright red leading the eye around the work to a number of flame-like plants implying that heat is rising from the ground. A second woman clothed in green formal attire glances defiantly at the viewer while a small masked androgynous figure with long blonde hair adorned with pearls and transparent fabric rises out of the flames. A bell jar presents two extinct Huia birds forever trapped and preserved.

In this painting the viewer is faced with issues regarding life, death and desire. In the first panel two figures, a male and a female, are unaware of each other's presence, creating a sense of silence and indifference. The naked male figure's genitals are obscured by a green flame-like plant and in his hand a claw-like bloom is visible. His naked body speaks to the viewer of desire while, in contrast, the bloom in his hand can be seen as some kind of brandished weapon. The female figure is clothed in black formal attire in contrast to the flourish of green growth around her and rather than emitting the radiance of life she grasps a gun in her hand and thus reminds the viewer of the constant threat of death.

Near the bottom of the canvas the viewer slowly becomes aware of three small figures. One is a miniature skeleton, not just miniature in scale but in proportions as well as if we are seeing the bones of a small child. A nymph-like figure in similar scale is camouflaged by its green skin while another small figure appears to be a miniature naked woman floating amongst the foliage. These figures can be read as intimations of the future; as effibryonic versions of the larger figures, waiting for their own moments of radiance and violence in the passing of time.

The Hawthorne Experiments took place at the Western Electric Hawthorne Works in Chicago in the late 1920s to 30s. Harvard business professor Elton Mayo conducted experiments in productivity and working conditions. A group of artists drew inspiration from these studies for an installation of the same title at the Blue Oyster Gallery in Dunedin. The artists have insisted on remaining anonymous even to the extent that installation of the work required them to somehow pick up a key and set the work up during the night. Stepping into the gallery space viewers may find themselves under the impression of having accidentally stumbled into an office space after business hours and one almost expects to come face to face with an exhausted office employee.

The space is dimly lit, making one very much aware of the lamp on a desk and of the flickering of a projected film on the wall to the right. Stepping up to the desk as in a reception area one becomes aware of a rustling underfoot, which on further inspection proves to be scattered phone book pages folded into darts. The darts are littered around the entire space but accumulate in a corner to form a small pile. It almost appears as if someone has sat at the desk spending time folding hundreds of darts which have been sent flying around the gallery (or office) space one by one. 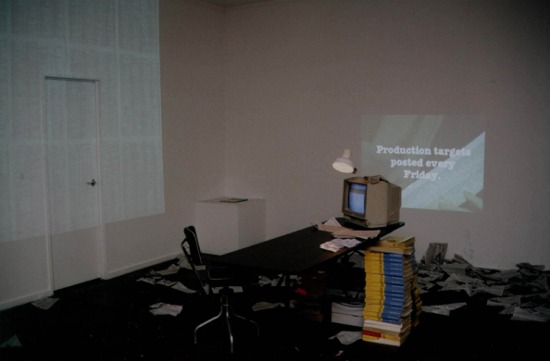 Confirming this, a video projection shows hands folding darts and this projection is formatted almost like an instructional video with occasional pop-up slogans such as "productive workers are happy workers" and "follow all instructions carefully". An image of a target also pops up onto the screen, reminding one that production targets need to be met.

Stacked neatly in front of the desk are two piles of phone books ranging in age from the year 1999 to 2002. What significance do past telephone directory listings have in this context? On closer examination a computer screen on the desk presents a phone book where directory listings are slowly becoming blacked out and erased. People's name's are being removed or blacked out with little care about the fact that that there will thus be no indication of their existence. When further exploring the space, one finds a clipboard which seems to invite the viewer to fill out an application to be removed from directory listings. The application form, however, suggests that there is a possibility that applications may be declined. In this way an ambiguous relationship between individuals and an institution is implied.

The installation as a whole suggests that a number of people are involved. One's role as a visitor to the space is emphasised by a number of visitor's badges positioned on the desk and stating that they have to be worn at all times. To the left of the space, hundreds of phone book pages are taped to the wall in a grid-like format. On the opposite wall there is a grid of 2002 phone book covers in clear plastic sleeves pinned to the wall five by seven high. Handwritten on each is some kind of serial number that leads the viewer to question why a phone book cover would warrant such extensive cataloguing or filing. One would imagine that old phone books are good for little more than the rubbish bin or recycling centre. Thus value here becomes an important point of contention in the entire work. What is the value of a work that denies authorship? What is the value of a work which is made from what most would consider to be rubbish? What is the value of repetitious and arduous human labour? What is the value of an individual within this archive of so many names and so many numbers and so many obsolete actions?