It is rare to find an exhibition at Artspace that is worth looking at (often there is merely something to ponder), but I can't resist Francis Upritchard. The 'look' of her exhibition, Doomed, Doomed, All Doomed, was its principal virtue. It tickled my funny-bone. 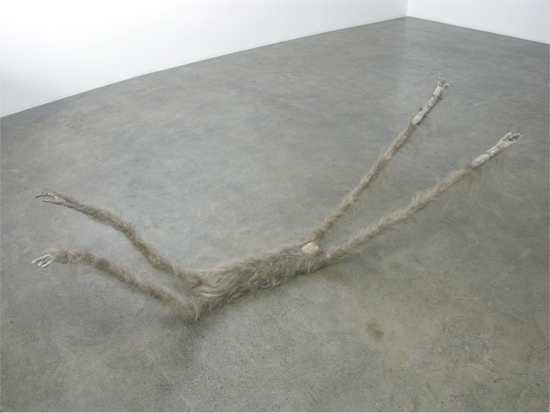 In the largest space in the gallery there was nothing but an absurd object entitled Sloth - just an emaciated apelike creature, lying on its back, four legs sticking up in the air, in the centre of the room. The smaller rooms contained clusters of curios, creepy and cute, in vitrines or on plinths and low shelves: preserved Pakeha heads (for which Upritchard is well-known), human fingers in a glass tureen, 'primitive' ritualistic relics, a furry ape, assorted preserved or fossilised creatures, lamps with grotesque faces, a necklace of cigarette butts. These objects are made badly or made to look bad. The artist's glee in making them is obvious; an alligator-like object or relic is actually a modified hockey stick, ancient only in hockey stick terms, inscribed with its user's name, 'N. SKELTOV.

It does not require a deep knowledge of art history or critical theory to appreciate Upritchard's wit and cleverness. You don't need to be 'in the know'. Her obtuse objects hold their own amongst the detritus of the everyday world. When considered in relation to 'art', they languish amongst all the other art-stuff in the art-world, swamped by conventional critical approaches and interpretations; they lose their distinction. They don't require the art gallery, although it does supply a dignified space that makes them look even funnier.

To weave narratives around these objects would be silly-sillier than the objects themselves. In making stupid, putrid objects, Upritchard invites a mode of looking that is dumber than the attitude customarily taken to artworks. You'd be dumb not to be dumb in your response to her work.

Many artists have transformed aspects of banal 'low' culture into 'high' art, elevating and subsuming it rather than embracing it on its own terms. Upritchard's objects invite a mindless response, not a high-falutin one. You're asked to become a philistine. In doing so, you incorporate, within the experience of 'art', the division between 'art' and mass culture', or 'high' and 'low'. This is what 'objects' - as distinct from simply 'artworks' - do.

Upritchard's work will not challenge you. I suppose if you have a narrow view on what constitutes art, you might find it challenging to look at this stuff in an art gallery. But really the relationship of Upritchard's work to art is irrelevant. If you know that she is having an exhibition somewhere, I recommend you go and see it. Enjoy it. Experiencing an Upritchard exhibition must be an exception to the reported observation of Samuel Johnson that one is never happy in the present moment except when one is drunk. And if it can generate happiness, that's fine; it can rival kitsch on that score.

This suggests that Upritchard's work is not 'difficult', 'cutting-edge' art. In terms of the modernist framework of the 'avant-garde' and the 'academy' (or the innovative and the conservative), Upritchard's work is at the top of the 'academic' tree. She is to contemporary New Zealand art what Gerome and Bouguereau (wonderful academic painters) were to nineteenth-century France.

In the meantime, the 'avant-garde' standard has been set by lan Scott with his white-dominated Model Series No. 54 (Girl with Hirst), exhibited at the Prospect show in Wellington last year. Scott has pointed a way beyond the blinkered adherence to the principle of surface coverage which plagues New Zealand painting. Gaye Jurisich, of Hamilton, favours an all-over, 'filled-up' kind of picture, but she is capable ofmaking a virtue out of it. And in contrast to Upritchard's exhibition, her paintings are challenging both as art and as objects-in-the-world-but mostly as art. Exhibited at Whitespace, they are the most difficult-to-like paintings I've seen in Auckland recently. 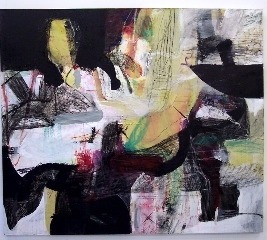 Initially they look repellent. It would be easy to mistake them for yet more of those big, rancid, splattery, congealed, glutinous, mucky melanges that are often mistaken, in turn, for 'expression'. But Jurisich's work is not about purging and splurging.

Jurisich is a superb colourist. However, the colours tend to be buried. They are made to struggle, swelling up sporadically with a gorgeous glow. In fact, all the elements within the paintings seem to be pitted against each other, forced to prove themselves. The result is a truce, a fragile equilibrium in which each element finds its place.

As well as layers of paint, there are fragments of textile and paper, and wild tangles of scribbled line. Fine gridlines occasionally poke through from beneath. Dominating the compositions to an almost affronting degree are large black patches, reaching for the centre from the edges, or stretching themselves edge to edge across the surface. Using black as a positive 'colour' is not easy. In these paintings it may appear to have a rupturing effect, hindering the fluidity and all-overness of the surface. Yet that surface is coherent in spite of, perhaps because of, these awkward intervening shapes.

In one painting the black areas are less disruptive. They are more linear and elegant. Also, they interlock with passages of dark maroon creating a generalised, modulated area of darkness, a contrast to the lighter areas of the picture. This is the most immediately appealing and decorous of all the works. It is the least successful.

Although the black patches appear to be cropped by the edges of each work, the composition is centralised, self-contained and static. There is the potential for more eccentric, and even more 'difficult', compositions.

This could also be achieved by putting less into the paintings. While their quality and toughness is partly due to the artist's ability to juggle conflicting elements, she may be trying to do too much. The variegated surfaces are part of the appeal of the paintings; one can get up close and savour small 'moments' of visual experience. But overloading the surface can frustrate the viewer's desire for prolonged perception of the whole entity. Parts of these paintings appear arbitrary or unnecessary - the attention paid to patterned fabric in one of the works, the exposed gridlines of another, and the distracting koru-like forms (evident in most of the paintings) which seem too defined and contrived. 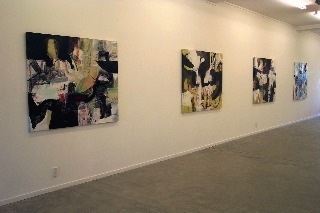 Jurisich deals with issues and problems of art-making, specifically those associated with making pictures on canvas. These are the kinds of things that Upritchard evades. She does not grapple with the history, conventions and disciplines of art, nor with social or political issues. There is no mental struggle. This is why her work is so easy to like, and 'academic'. Yet it has the look of 'cutting-edge' art, whereas, say, the artists exhibiting at the Real Gallery in Newmarket appear to have little to do with avant-garde attitudes. Here is, for the most part, landscape, still life and portraiture, done neatly and safely. And then there is the work of Estonian artist collectives, Avangard and PinkPunk, assembled by Marcus Williams and Robin Stoney at the Gus Fisher Gallery under the title Avant-Garde or Death. Where is the avant-garde?

The Gus Fisher exhibition presents documentation - photographs and videos - of performances, one of which (I could be your mother) was re-enacted at the opening. It is clear that the documentation is itself regarded as art. Avangard's series of photographs from which the exhibition takes its name are stunningly staged and manipulated. They display the violent fictional deaths of artists like Andy Warhol and Joseph Beuys at the hands of Avangard members Sandra Jogeva and Marcus Tamm, signalling the inevitable 'death' of what-was-once-new as a corollary of the avant-garde's privileging of the new.

The wall-text accompanying another Avangard piece, a video called Visitors from the Future (2002), details the implications of this apparent avant-garde desire for novelty: 'The concept of the avant-garde is predicated on youth culture, notably western, urban youth, as the most productive and able to generate dynamic progress and valuable ideas, whereas tradition and stability is viewed as dysfunctional, a static malaise.' In this video, the elderly are the protagonists, wearing shirts which bear slogans like 'time is on our side', 'visitor from future' and 'getting stronger'.

Some would say that 'a static malaise' describes the art on show at the Real Gallery - paintings that could be described as conservative in style and subject. They certainly wouldn't go down a treat in art-world circles. New Zealand's most prominent curators, writers, theorists and dealers find such work difficult to handle - which is why they wouldn't touch it with a barge pole. They can and do handle artworks that have the look of being difficult and 'out there'; these receive immediate institutional support, and enjoy a large audience. Conformity of taste - the uniform approbation of et al., Yvonne Todd, and other 'big names' - suggests that this audience, and the work it embraces, is 'academic'. The fact that most contemporary art is not genuinely difficult can be ascertained from the fact that so many people find it easy to like. So where is the avant-garde? If it is not the art which has this superficially difficult 'look'. . . Oh my god, pretty pictures are so avant-garde right now.

At the Real Gallery, Brent Wong's obsessively crafted objects and Alvin Pankliurst's paintings stand out. The latter could almost be allegories for the idea suggested above, that subversion in contemporary art appears where it's least expected. Quiet Time and Full Time (both 2003) depict roses in a vase, but the decorative arabesques of the background wallpaper turn out, on close inspection, to consist of copulating couples. In Southern Comfort III a naked woman reclines on a couch, but her body is actually formed by images on four adjacent and overlapping cushions, thus fragmented and surreal. The comfortable and the decorative become disturbing and erotic.