Paradise Lost? The elements that inspired the classic tale are relatively few and simple: a garden, a tree, an apple, a temptation and a decision. In her installation Welcome to Paradise at the Dunedin Public Art Gallery, last year’s Olivia Spencer Bower Fellow Bekah Carran uses these fundamental props but she reinvents and subverts them, dislodging Eden from its heavenly veil and locating it in the everyday. 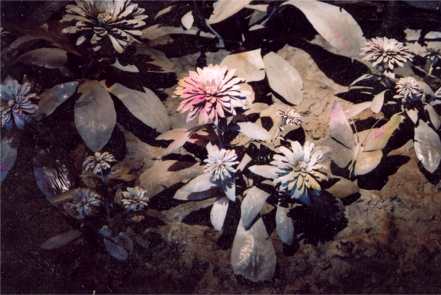 Carran’s garden is no lush and blooming Utopia, rather a steel-grey ghetto injected occasionally with sprayed washes of electric pink and yellow that have the low vibrancy of a background hum. The title signage suggests this is a departure lounge for the soul in waiting, a world hewn from metal and wood and resistant to human touch. Steel-cut blossoms flower resiliently in garden tubs and a group of convolvulus line the background like a wreath. Spotlit, a slender and fragile apple tree bears a few green leaves and, rarer still, magical rose and gold-coloured fruit. On a park bench placed in view of these spindle branches you are invited to sit and dream some ordinary dreams.

As if awakened within the pages of an illustrated storybook come to life, the setting holds in suspension the past and the future. All is quiet and still within. Carran’s evocation of the space between origin and destination feels like a pit-stop on a long-haul journey, a depot for the transient and the disengaged. This is not to say that all is lost in paradise. The sense of nostalgia that tinges the work is infused with a gentle sweetness. Like golden orbs in a wasteland, each apple is lit with a surreal and luminous inner glow. Sitting here, expectant and hopeful, it is possible to feel like Newton waiting for the apple to drop. 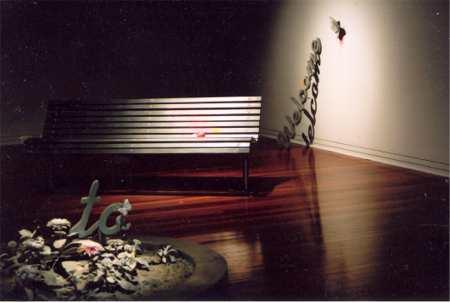 At Milford Galleries, Dunedin scenes of a tropical paradise were fashioned in optical splendour. Appropriately entitled The Customs of Tripping, Reuben Paterson’s suite of glitter-dust canvases quite literally shimmered, as if the images themselves were under the influence. Paterson’s work suggests the various implications of tripping by uniting kaleidoscopic colour and motion with the sense of a psychedelic expansion of the mind, or a journey of the spirit. The distant sound of bird song gave a sense of the supernatural, as did the discovery of 38 pairs of abandoned glitter shoes strewn about the gallery floor as if the discarded moorings of an enchanted populace all departed on a soul train.

Behind the litany of footwear arises a likely destination. Blazing on the walls like a distant mirage, the seven panels of the work Paradise Suite presented an island wedged between moon-raked skies and foam-lapped seas and framed by silhouettes of gracefully stooped palm trees. Reminiscent of the motifs that sprawled across poly-cotton shirts in colourful bandwidths, the work had a truly retro vibe. 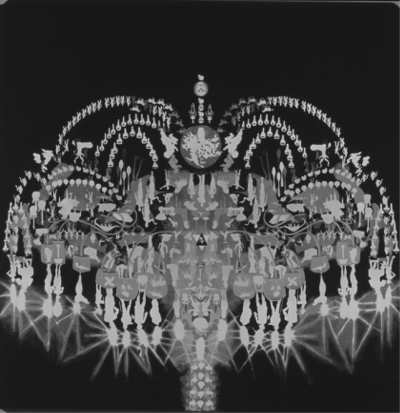 The hallucinogen-induced appearance of Clive Humphreys’ work The Chandelier (2003-04) is less like an attempt to re-create paradise and more like an illustrated history of the origins of the world. Like a tremulous and glowing neuron, the painting’s multitude of chained branches both receive and transmit information and, like some kind of mind-map to the artist’s brain, they reference Humphreys’ artistic predecessors and his personal history.

Like Paterson, textile print and design is also integral to Humphreys’ work. Still widely regarded in Dunedin as a printmaker, seamless configurations of pattern are to be expected in Humphreys’ prints but in his recent exhibition at the newly located Peter Rae Gallery on Moray Place, he tests his ability to paint pattern, subjecting order to the inconsistencies of the wavering hand and eye. Remarkably, Humphreys comes close to emulating the mechanised and regulated pattern of printed fabrics, while never quite matching a production line style. In Mailer’s Catalogue (2002-03), what at first glance appears a seamless configuration of Anubis figures (Anubis is a god of Ancient Egypt), on closer inspection contains engaging glitches and corruptions. 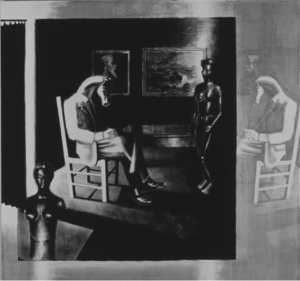 Dressed in a suit, Anubis is typical of the kind of beings that inhabit Humphreys’ recent works. Like Bill Hammond’s bird people, Humphreys’ mythic characters have a memorable intensity, as if he has pulled back a curtain on the mind to reveal a merging stream of the real and the imagined, images pooled from an amalgamation of art-historical references. The exhibition’s title work is loosely based on Giotto’s Arena Chapel fresco The Annunciation to Saint Anne, a work that is renowned, among other things, for its stage-like composition. Removing the front wall of the Saint’s chamber, Giotto makes us privy to the moment of her revelation when an all too physical looking angel materialises through the window.

This shallow division between ‘interior’ and ‘exterior’ is played upon in Humphreys’ triptych Paramour, of which Behind Giotto’s Curtain is a part. Emulating Giotto’s union of the spiritual and the physical, the real and the surreal, Humphreys creates a shallow interior for a host of spiritual and mythical beings that here emerge in physical form. The borders of perception and experience are blurred even further in mirror images that have the capacity invert and distort. In Confluence—Keeping Afloat with the Classics (2003-04), the painting is divided through its centre by an inferred mirror line, presenting the reflected figures of Sophocles and a female serpent that are together wrapped in a deathly embrace. Death is not perceived as the journey to paradise and no heavenly visage awaits. Here there is only a sense of the disembodied self watching its otherworldly one, opposing life in a mirror.

Otherworldly in an entirely different sense are a group of precious curiosities, jewels of the Pacific that each conveys the allure of the exotic. Like specimens collected by early shipboard naturalists, though neither ferried nor foreign, these objects inspire feelings of wonder and delight. In their exhibition of brooches and pendants at Lure Jewellery, Lynn Kelly and David McLeod considered the variety of our resident flora and fauna posing questions that explore how we determine the boundaries of the native and revealing how rarity might render the native exotic.

Imbuing our native icons with a sense of whimsy and delight, Kelly’s pairing of a Tree Fern brooch—better known as the silver fern—within an old Black & White tobacco tin is typical of her style, conflating emblems of identity and transforming the way in which these symbols of nationhood are read. Though familiarity is their decoy, the real lure of these pieces is that each one has the ability to explore our botanical residents afresh, re-inventing and re-discovering what constitutes the native. 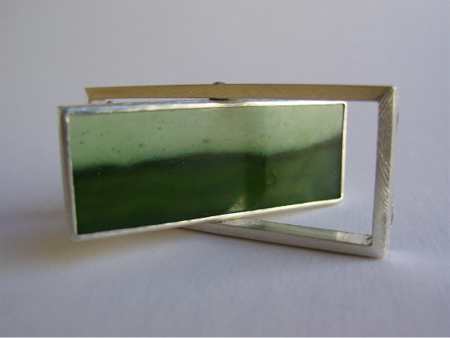 David McLeod’s reversible brooches and pendants exploit the qualities of pounamu with stunning effect. This understanding of natural materials translates into works which harness light to speak of the places from which they have come, translating an innate language of shifting moods and seasons into shadows, reflections and gradations of green-tinged colour.

A brooch that seems at first to be a pristine pounamu landscape, when held up to the light discloses the forms of shadowy fish swimming in pea green waters, yet swivel the brooch and see these forms fleshed out, carved from silver in low relief. While some of these works convey untouched rugged headlands and island reserves, in others the shadowy forms become menacing, allowing McLeod to express concern at the negative effects that introduced species have had on the native. In a variety of memento pendants, the silhouettes of several extinct bird species are caged between transparent slivers of pounamu, aide-mémoirs to the lost and all but forgotten. In the tradition of the naturalist, it is viewing each bird in sad isolation that renders it foreign and exotic.

Whether whimsical or sincere, Kelly and McLeod present pieces that are made to be worn over the heart, jewellery that frames a part of paradise whether it be lost or found.