Some might say that Wellington needs new exhibition spaces as much as it needs another Malaysian restaurant, but recently a number of galleries have opened, all proposing to cater to very different artistic and community needs. New galleries such as Show, Expressions Arts and Entertainment Centre and the Film Archive have so far proven themselves to be successful in addressing these perceived needs.

Simon Morris' exhibition, 3 Orange Lines, featuring Eugene Hansen and Kyle Jenkins, was the latest in the line up of exhibitions at Show, a new artist-run enterprise, directed by Eugene Hansen and Jenny Gillam. It differs from other such spaces in its aim to provide a forum for experimental practice by mid-career artists outside the potentially restrictive and pigeonholing context of the dealer gallery or public art museum. Show is independently funded and curated, so it can indulge in its aims to appeal to a limited and specialised audience thus allowing for more complex or controversial works to be aired without compromise.

Over the last few years, Simon Morris has been developing in new directions. He is increasingly engaging in collaborative contexts and taking his work out of the studio, creating pieces that both respond to and coexist with architectural spaces, continuing to explore geometric abstraction through site and painting. 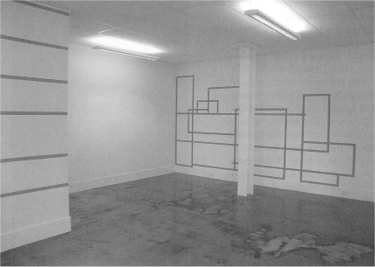 His wall-painting installation at Show was based on a set of very basic rules, with decisions being made at a specific time and place within the limited range of these parameters, the end pattern being a consequence of the combination of thought and behaviour within the given space. The involvement of other artists who played the game according to Morris's rules allowed an element of chance to enter the work, one that was beyond Morris's control.

This is a natural evolutionary step in Morris's work, which has always used a degree of chance to determine the outcome, whether by the throw of a dice, or the use of a computer-generated pattern. The process of making here is essentially democratic and, informed by and as a consequence of each individual maker's mode of practice and execution, the content shifts and changes.

By bringing in two other artists to feature in the making of these three lines, the work is still a Simon Morris, but even within the limitations of a continuous, unbroken orange line and right-angle bends as the only means of navigating the space, individual signatures were played out and the 'artist's touch' became evident.

While the individuals responsible for each of the three orange lines were not identified, Morris' was unmistakable, consisting of that smooth, clean, crisp-edged line that organised a closed composition of stacked boxes on the wall. The second orange line had a much more physical presence, the paint itself becoming a key element of the line, error and concealment and doubling back creating more palpable edges, enhancing the density and texture of the line. A third line divided the wall into six, wrapping around one corner of the gallery wall and seemed to work most closely in relationship to the space.

Taken together, 3 Orange Lines contributed to the construction of a sophisticated environment that encouraged the viewer to engage with the architectural space on different levels of intimacy and connection, just as the lines themselves did.

Creating an environment in which the viewer was encouraged to interact with contemporary artwork was the aim of curator Aaron Laurence in his exhibition User Friendly at Expressions Arts and Entertainment Centre in Upper Hutt. Expressions opened in September 2003 and is a brave new gallery space that aims to break down the barriers to the reception of art in a potentially conservative community. 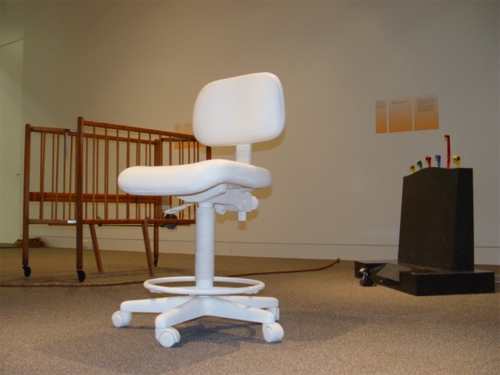 User Friendly took very seriously the desire to make contemporary art accessible to the public, hoping to explain the 'how, what and why of modern art'. No mean feat, and one that was both aided and hampered by what Mark Amery referred to as 'a distracting wall-text experiment'. Two wall panels written by the artists themselves accompanied each work, one in 'artspeak' and the oilier in 'everyday language'.

While this might not have been the strongest aspect of Laurence's show, as, in unaccustomed hands the 'artspeak' text often became overtly obtuse and thus nonsensical and the 'everyday' rendered so banal as to say very little, his expertise came into play with the varied selection of works in the exhibition. Works were consciously chosen that not only engaged the viewer through humour or thought-provocation, but that also collided with or referenced their world.

Humour was a strong element in many of the contributions chosen by Laurence for User Friendly. Whereas conceptual art often anticipates a negative reaction from a wary audience, the use of humour can engage the viewer, disarming them before a critical response can be formulated. And, once the humour has subsided, it is often the case that greater concerns might be revealed to the astute or willing viewer.

Stuart Shepherd's Celebrate yourself come on (2004) is a sensor-activated work, a row of spangly party hooters sitting atop a gravestone that are triggered when the viewer walks past. While Shepherd would like the target audience for his work to be 7-10 year olds, he is not afraid of more being read into it. For example, this work could be seen as a modem-day version of a vanitas painting, produced as a consequence of the notion that we are becoming increasingly distanced from our own mortality. Perhaps, he ponders, if we were more honest about our own mortality, we might be nicer to ourselves and our neighbours.

V.J. Rex incorporated inflatable chupa chups into his installation as a means to make a 'fun comment on the very serious subject of race relations in New Zealand'. Erna Stachl's crocheted objects playfully reference the everyday as shoes, candlesticks and teddy bears are reformed and represented as brightly coloured objects of handiwork. 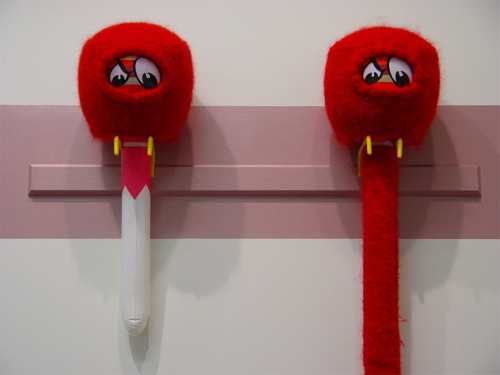 This evocation of the everyday was another tool used by Laurence to draw the audience in, and Glenn Burrell's works were the showstopper from this respect. Burrell uses the everyday object itself to make a painting of itself, coating it in layers of paint which are then deflated and re-presented lain flat on the gallery floor. There is a complex interaction going on here between notions of surface and object, illusionism and realism, reproduction and reality, as painting is reduced to the medium itself, intimately related to, yet detached from the original object.

Similarly, Glen Hayward's 3-dimensional sculptures replicate the real in wood-carved versions of chairs or polystyrene packing that continue to challenge the viewer's assumptions or expectations as to where the 'real world' stops and art begins. The surrealist jolt that these works educe is also present in Emily Pauling's Safe as houses (2002), her padded pink flannelette clad caravan sitting strangely at odds with the normal functionality of the object in the 'rough outdoors', surely recalling its infamous precursor, Fur Breakfast by Meret Oppenheim.

The Film Archive was host to Hye Rim Lee's BOOM BOOM: super beauty super heroine (2004), one of four solo-artist's projects exhibited over the time frame of Prospect. 4 DVD projections charted the generation of Toki, a female cyborg. Focusing on the most fetishised aspects of female sexuality, lips, breasts, buttocks and high-heels, Toki's physical appearance is tweaked and adjusted. Lips are pulled from a thin line into a puckering pout, breasts rise and become fuller in response to a visible point of a mouse. Shoes evolve from platforms to stiletto heels and Toki's bottom becomes pert and rounded. 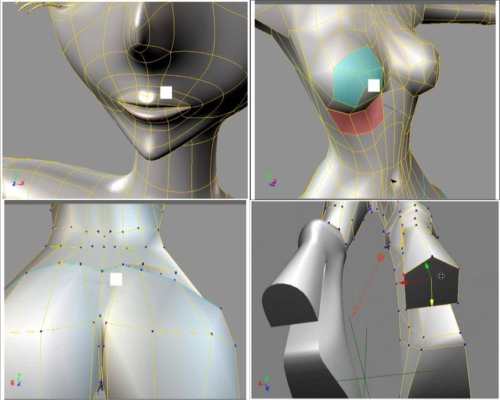 Daniel Malone put New Zealand's starring role in the Lord of the Rings phenomenon under the microscope in Mythopoeia - There and Back Again (2004), also at the Film Archive. This mixed media installation consisted of LOTR memorabilia, including phonecards, stamps, T-shirts, coins, a role-playing board game as well as a film screening and programme of material from the Film Archive.

While Tolkien was attempting to create a British mythology, here Malone draws an analogy with the way that the LOTR experience locally contributed to the ongoing construction of New Zealand's national mythology. This notion was further explored in the selection of material from the Film Archive, which featured works that could be seen to have contributed to the myth-making of New Zealand's national identity. As a country we continue to negotiate our role on the world stage, battling with the perhaps contradictory desires to be renowned for both our nature and our culture. One feature of the installation that summed up and wryly commented upon this dilemma, as well as the national buy-in to the LOTR spectacle, was a poster caption that, under a black and white photocopied landscape, awarded us 'Best supporting country in a motion picture'.