Naomi Smith's Curtains for Jonathan, a splendid wool and polyester suit was destined to be gold. After all, this magnificent outfit was designed for art dealer Jonathan Smart - host extraordinaire of Showstoppers, a group show curated by Tessa Giblin. Smith's suit is far from conventional: small wings are stitched to the back on the jacket, racing stripes added to the trousers, padding, nips and tucks tailored to fit. 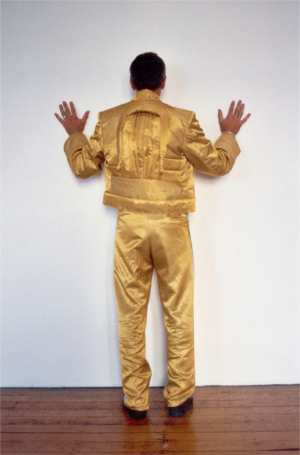 For the duration of the exhibition Smart donned this splendid costume; masquerading the dealer and artwork as one. Smith points to the glitz and glam of the art world, and the wheeling and dealing that takes place in a commercial gallery. Smart orchestrates this show, a proud ringmaster looking to tailor a deal, perusing and promoting the talent of five young artists: Steve Carr, Joanna Langford, Eddie Clemens, Ri Williamson and Smith. A snappy and bold costume was a must, for this knockout exhibition exceeded all expectations.

Steve Carr's suite of wrestling photographs featuring the artist and a female mode by the name of Paris, mimic the images one might find ill a 'How to Wrestle' book. Competitors are in crisp white underwear, holding each other in unconvincing wrestling poses. Their grasp is gentle, free of exertion and blatantly staged. Carr's images are mechanical, carefully documenting each move: Half Nelson, Switch, Near side cradle with leg control and Spiral ride with shoulder control.

The artist's seemingly harmless, satirical photographs of two wrestlers locked in various positions prompt a feeling of unease. The interlock of a man and a woman questions the fairness of the match, a power struggle or perhaps a ritualistic or even intimate battle between the two opponents. For a brief moment, the viewer is tricked into believing that they should not be indulging in this voyeuristic scene. Carr is suggestive, teasing the guilt ridden viewer with his provocative performance. 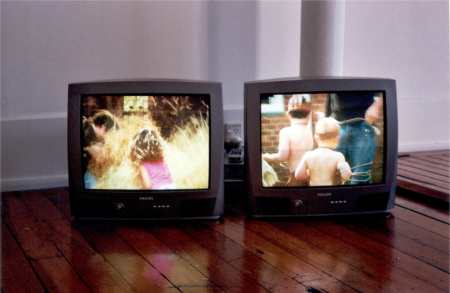 Hay fight and Cowboy and Indians, two DVD's later selected for Telecom Prospect 2004 exhibition, lead the viewer through a scene of (mis)adventure. Carr allows himself to be buried in straw by a group of giggling girls, only to reappear from the depths of hay to the shrieks of his entourage. In the exhibition catalogue, Sarah Farrar rightly questions, is there something else to this seemingly juvenile scene? Alternatively, are these scenes simply 'beautiful little moments' as described by Carr? It is not surprising that misconstrued thoughts may lurk in the minds of the artist and viewer - Carr's portrayals of everyday events hint at hidden agendas and devious intentions.

By comparison, footage of children dressed as little Indians in hot pursuit of the Sheriff, played by Carr are free of innuendos - what you see is what you get. The chase soon ends in a suburban backyard where the artist is roped (somewhat willingly) to a clothesline where he is sprayed with the garden hose. It is heart warming footage, free of suspicion and malice. The delicate fine crafted glass fire extinguisher located on a nearby wall prompts the question: are Carr's scenes as transparent as they initially appear? 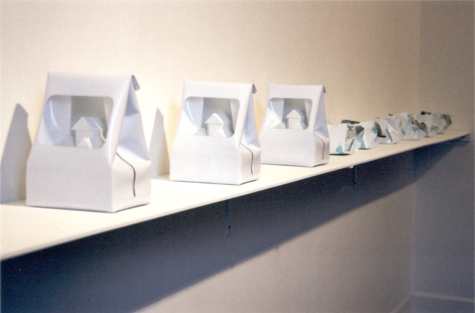 Gated communities and 'readymade' housing are 'packaged' by Ri Williamson. Architectural polystyrene models, devoid of life recreate the uniformity of show home buildings, the sterility of modern suburbia and the values it pertains. A selection of houses is on offer: Takeout, Regular, and Upsized, each almost identical to the next.

The same fear that lines the pockets of 'safe housing' developers is at the very heart of Eddie Clemens' installation. Razor blades imbedded in chewed, fleshy pink gum echo the widespread urban myth that kept a generation of children away from the hydroslide. American High School massacres spring to mind; violence and warfare among other troubled thoughts. Twin packs of blades and gum hang neatly on a rack, ominously awaiting purchasers. The blue, red and white barbershop swirls offer a bloody scene for Clemens' 'merchandise'. A trail of small white crucifixes, each a lost soul, are attached at random to the gallery's back wall located in close proximity to green mats in the shape of Auckland cemeteries. The seedy underbelly of urban life creeps into the gallery space. 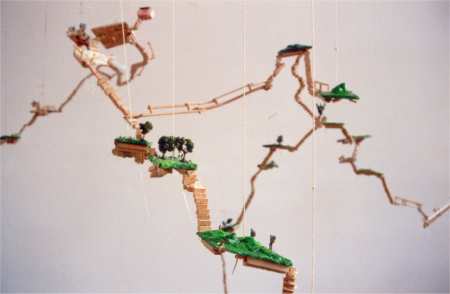 In a world seemingly miles away from Clemens' sinister barbershop blood bath, Joanna Langford invites viewers to her fantastical land of make believe. Rough-cut MDF, globs of glue, cake icing and Lilliputian models are strung from the galleries ceiling to create the Land of Sweet. The beauty of Langford's creation lies in the mind and memories of her viewers.

Wandering amongst this model landscape, creeping on tip toes and desperately peering to the summit of Langford's construction; playthings, secret places and the private worlds of children are revisited. Langford's materials trigger a series of associations with childhood, be it the sweetness of confectionary or the found objects that she incorporates into her structures. Tiny model people hike the sugar coated landscape, passing Hansel and Gretel houses dripping with colour and chocolate hail. The Land of Sweet delves into the heart and mind, drawing childhood memories and experiences to the fore. 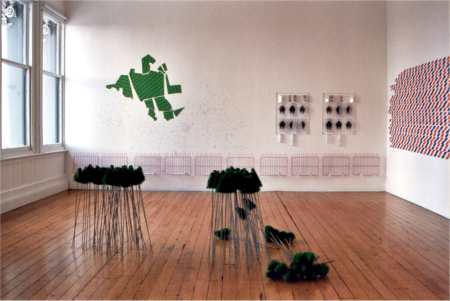 In early 2003 Victoria: Edwards and Victoria Bell embarked on Dear Victoria, a collaborative project recently exhibited at the Physics Room Gallery. Dear Victoria explores artistic partnerships, revealing new methods, directions and production. From the onset the two artists sought to document the process of collaboration, concentrating on mentoring and the evolution of ideas. Studio sessions and discussion were followed by six intensive months of drawing and making. 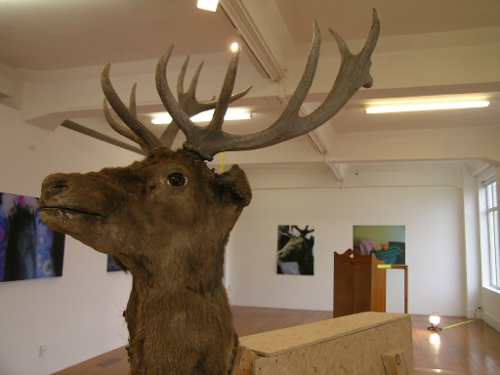 The gallery is transformed into a Victorian parlour. A stag's head mounted on a rough, bare frame and a cabinet of trophies convey Victorian sensibility. Masculine activities such as hunting and taxidermy are presented in stark contrast to gentle images of still life and domesticity.

Thematically, Dear Victoria is varied and frayed, an intentional disparity reminiscent of the drawing board, lengthy conversations, abandoned plans and revived ideas. Dear Victoria extends well beyond the concept of Victorianism that the artists initially envisaged. Here Bell and Edwards gather objects and images that speak of their collaborative journey.

Small selections of video stills map the 'drawing' process and experimentation. The loop and antler motif found in the photographic images and sculptural forms convey a continuation of ideas, pathways and branching out. While elements from each artist's practice are easily recognised - Bell's quirky patterned fabric works and Edwards' photographic and print work - a fusion of styles is apparent. Establishing the maker is denied as the installation is free of labels.

Dear Victoria presents a fruitful partnership whereby both artists lead each other in new directions. Bell and Edwards remind their audience that Dear Victoria remains a work in progress, the chatter continues and new collaborative efforts are accordingly devised.

In December of 2001 Denise Copland departed Christchurch for Antarctica. The body of work that evolved from this extraordinary Artists to Antarctica Fellowship was exhibited at the Christchurch Art Gallery over the winter months. A Standing Place is an astounding record of Copland's Antarctic journey. The freezing, vast southern land mass is portrayed through a series of works on paper, canvas and light boxes, extending Copland's practice beyond the printmaking medium.

Within the confined space of the Tait Electronics Gallery, Copland conveys the unforgiving landscape that is Antarctica. Tones of blue and white are eminent as are the textures and patterns reminiscent of the icy and wind-blown polar region. Six sheets of paper embossed with the lines of a snow covered landscape are pinned to the far end of the gallery wall. The Lure of Little Voices is barren, empty, and stark: complete whiteout. In the distance, a flag pole tilters as though upholding a strong wind. 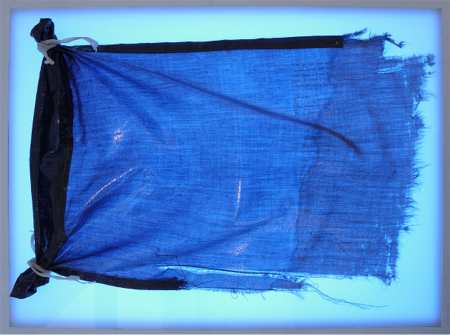 In direct contrast to Copland's expansive works, a large woodcut on treated canvas, titled A Standing Place, pays homage to the explorers of the heroic age. An image of an uninhabited hut conveying warmth and shelter, recalls the determination of explorer Ernest Shackleton and the men who perished whilst traversing the blue continent. Copland regards Antarctica as Shackleton's standing place, and through the installation seeks to reveal his vision and experience.

A tattered and weathered Antarctic map rests on a light box. The blue illumination reminiscent of the ocean that pools beneath the ice sheets Shackleton and now Copland have crossed. The same Antarctic flag is featured in a series of prints, slowly fading from blue to white recalling the cyclic process of freeze and thaw. Diary entries, signatures and text are printed on the surface of the light boxes and flags, each recalling Shackleton's expedition, his thoughts, words and the lasting impression this magnificent landscape made on the early explorer.

This continent conceals and reveals secrets and artefacts. Shadows of the past are snap frozen. The elemental landscape and the ghosts of the heroic age are exhibited with clarity and precision: Shackleton's words resound, the pressure of ice cracking, shifting and melting is almost felt.