To say that the paintings in Pete Wheeler's Whitespace show, I went looking for one good man, were a cross between Leon Golub and a Linkin Park album cover sounds like a putdown - but that's not my intention. They engage with urgent social and political concerns; terrorism comes to mind immediately (clenched fists, obscured faces, suggestions of pursuit, violence, death). But Wheeler stops short of the specific, and uses colour and form to build up the picture (in the sense of the composition as well as the scene or action). Even the military-style or stencil-like texts - 'public enemy', 'hell yeah', etc. - are evocative in their style as much as in their signification.

It is Wheeler's style which makes these works compelling. There's both roughness and finesse. The fist-clenching figure in ICBM Intercontinental Ballistic Missile also clasps a rock in his left hand - it is not actually painted in but merely suggested by the absence of paint and the presence of what appears to be pencil drawing. It shouldn't work, but it does. Similarly, most of the paintings feature dominant black shapes, often tying one side of the canvas to the other - sort of bolstering the surface.

You can see it in Hell Yeah. Here, the blue-green ground is particularly striking - beautiful, even. This, along with the work's seeming formal simplicity and 'rightness', make it a "stand-out for me; I preferred those works in which forms were permitted to assert themselves as solid entities. Achtung appealed least because the surface was filled up with shapes, patterns, words, resulting in a patchwork or collage effect.

I aint goin out like a suxer Part II has a deep red oxide ground, like a Shane Cotton painting, with white writing filling the composition like a Peter Robinson. But the Cotton paintings in the retrospective at the Auckland Art Gallery look uptight and finicky in comparison. Why bother with all those little compartments, each filled with obscure Maori texts? Wheeler's paintings have a directness - both blunt and subtle - which is exciting. I was also amused by the directness of the artist's opinions on the parlous state of New Zealand art, available in the artist's file in the gallery.

At the Gus Fisher Gallery, Francis Pound has curated an important exhibition that calls for greater attention to be paid to Walters' nonkoru paintings - in this instance, his paintings en abyme. These are paintings in which a geometric composition is repeated or echoed in microcosm within itself - suggesting an infinite succession of ever-smaller instances, like the boys on a Bycroft biscuit tin, but curtailed after the first repeat.

Most of the works date from the late 1980s to early 1990s. It is an elegant exhibition, expertly organised with paintings on canvas in the large room of the gallery, works on paper in the small room, and vitrines full of preliminary studies - drawings and collages - and documentation, in the central foyer, along with relevant notes and quotes on the walls.

The exhibition is also supported by a publication - a catalogue really, but it has the feeling of something more substantial and valuable than that. For a start, it's hard-back, which makes a pleasant change. The text confirms Pound as the best art-writer in New Zealand. Certainly there are aspects of his approach that I disagree with, and ideas that I would have liked to have seen developed-for instance, the clear relationship between Walters' paintings and those of the American John McLaughlin. But Pound's eloquent prose generates that feeling one gets on encountering something particularly fine. In contrast with the smart-alec tendencies of some younger writers, Pound's writing is distinctive without seeming contrived. Moreover, it is backed by meticulous research. His sometimes wacky footnotes are a special treat.

With regard to the paintings themselves, I find many are regulated by an almost mathematical division of the surface. They lack the openness, flexibility and freedom that the koru paintings offered-potentially, at least. There is a failure of nerve in the later koru works; the control exercised over them is also evident in the en abyme paintings.

It is interesting to compare these Walters' works with the paintings of Roy Good, exhibited at Artis Gallery in Parnell. Each of Good's abstractions is made up of a series of panels, joined in an apparently irregular configuration. That irregularity is counteracted by measurements and shapes that unify the various parts. For the spectator, piecing them together, following through the linkages and repetitions, is a satisfying experience. In a couple of the works colour is used to good effect: a pleasing ochre and green-grey combination in No. 23, and a rich red and deep blue in No.8.

But there was something faintly annoying about this exhibition. Maybe it was the jarring of thin lines which shift from one primary colour to another in the course of dividing mottled, often drab, surfaces. Maybe it was the feeling that there was too much going on within each painting - that each fragment-each line, each tonal shift-seemed to mean nothing more than what its role within the whole allowed, rather than suggesting something beyond what was literally there. Although the gallery wall infiltrates the panels, each painting remains contained within itself - just as Walters' compositions fold in on themselves en abyme.

Within the Walters show, certain compositional types recur, but the main formal distinction is between those paintings in which the scaled-down repetition is integrated into the larger or overall composition, and those in which it floats independently over the top of what then appears as a ground. In the former instances, the tendency to divide rather than activate the surface is most apparent. In the latter - that is, in works like Composition in Blue No.3 (1989) - there is a positioning of forms which allows greater freedom and intuition - aesthetic decisions rather than mathematical measurements. The contrast between these two approaches is more obvious in the small room of works on paper, in which there are often pairs of related images; they use the same formal ingredients - the same basic shapes and colours and compositional basis - but in 'resolved' and 'unresolved' variations.

So, for example, in Untitled (1989) the small repetition of the composition floats free of the edges at bottom right, like a separate inset overlapping the larger surface, while in Untitled II (1989) it is locked into that corner as an integrated quadrant. Colour also affects the degree of integration; in Oriental II, a floating image appears unified with the whole because black and white are used throughout. The disengagement of the inset from the ground in some of the works gives them additional spatial ambiguity; they are more interesting for being pictorial rather than object-like.

Given Richard Killeen's close association with Walters, it is not surprising that his works raise similar concerns. Killeen's Dreamtime (1980) featured in a group exhibition at the Anna Bibby Gallery of artists using cut-out techniques. What immediately struck me was that it looked classical and serene - by no means a rupturing of conventional standards of pictorial unity, despite the claims that have been made for such works. The following ideas occurred to me.

Killeen's work relates beautifully to the delicate spheres of Neil Dawson suspended in front of it. Both are round, or roughly round, unified compositions - intentionally so, I would suggest.

The pieces are hung close together. There is evidence that Killeen wants the pieces to be hung in a close group. Rarely have they been hung otherwise.

The pieces are hung in almost exactly the same arrangement as they appeared in Francis Pound's 1999 publication, Stories we tell ourselves. This is interesting but of little consequence. Whether the lizard is next to the bat has little bearing on how the work is 'read'.

The paradox with Killeen's cut-outs is that they need a frame. This became apparent at Ferner Galleries' show Richard Killeen: Fragments, in works such as Untitled (1979) - a small oil on paper executed the year before Dreamtime. Here the pieces float on the paper in a loose oval group. The composition appears stable and unified. With Dreamtime, the only difference is that the white ground is now the gallery wall rather than a piece of paper. That doesn't make a big difference. The frame - at Anna Bibby - was effectively the top and bottom of the wall plus the lines formed by the comers of the room. The work was alone and central on that wall. And because it was centralised-and because of its essentially round shape and the wide distance from the edges of that shape to the framing edges - it appeared as a small, uninteresting figure on a large, inactive ground. Dead, silent, hermetic, without tension.

Artists who abandon painting often avoid such problems altogether. They evade that whole area of criticism and analysis. There were examples of this in the Cut-Outs show. Placed reverently on a low white platform, Peter Madden's Rose (2004) comprised an old chair consumed by a bunch of roses made up of images extracted from a book. Judy Darragh also evaded the more intricate issues of aesthetics. Dribbling white paint over a photo of a pin-up girl (Samantha Fox in this instance) is good for a laugh. On what basis can it be criticised?

Dave Goodwin's big New Works at Ferner Galleries highlighted some of the problems that painters currently face, one of which is the pressure to create saleable commodities. Goodwin has succeeded on this level over the last few years, producing a bulk supply of pleasant landscapes. But the new works are big - more as a big shift in his practice than in size. His technique is freer; to a large extent he has abandoned the Grahame-Sydney-anal-retentive thing. This is a good move. While it exposes shortcomings, the gains in immediacy and integrity outweigh these; one can quibble about tonal transitions and whatnot, but the corporeality of paint and brushstrokes is more compelling than the natural reality depicted. 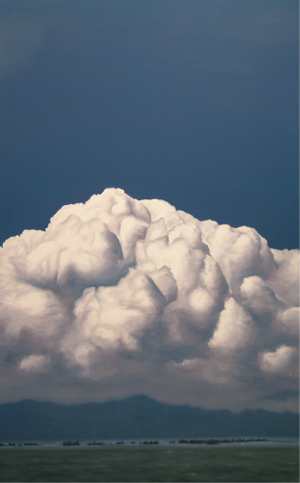 Goodwin is now also cropping and stretching works after he has painted them, instead of working within preconceived edge-constraints. This allows him to impose boundaries that contribute - and give tension - to the internal scene. The problem for Goodwin is that his landscape subject matter - specifically his focus on clouds and hills tends to gravitate towards two main compositional formulae: either low horizon/big sky, or dominating hill-forms/small strip of sky. While his cropping of the vertical edges allows this new set of works to work better, they work better only within these pre-existing systems.

It may be that Goodwin eventually dispenses with the landscape forms for which he evidently has such affection. Perhaps the thighs and vaginas and such like, which gradually appear as one looks at many of his hill-forms, will provide ideas for future works. Certainly Goodwin has chosen the right direction - but it will involve difficult decisions that come with serious painting. In the recent exhibition, the least original images, and the least interesting in technique - such as Big Coastal (too Michael Smither, with its profusion of shiny rocks) - remained the most popular. You might say that this leaves the pool artist caught between a rock and a hard place.