Having done to death the asymmetries, trashy colours and in-your-face antics of the 1970s and '80s in the fashion world, not to mention the rise of '70s-inspired Kiwi rockers The Datsuns on the global music charts, there have been rumours of a shift back further in time to the 1940s for the winter season of 2004. Regardless, it seems that in the art world at least, there are still those preoccupied with the antiestablishment ideologies of 1970s art-making practices. Read the promo for 'Interventions: a fugitive group of collaborators and conspirators make strategic art interventions', who took art to the streets in force in a two-week art event that coincided with (and challenged?) the 2004 New Zealand International Arts Festival. 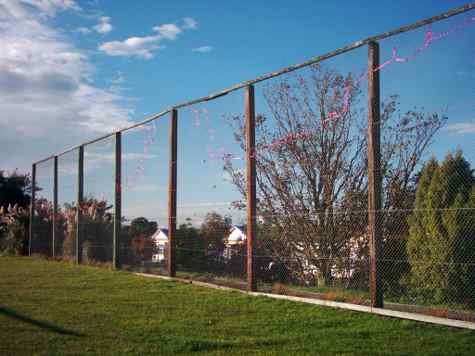 ARTIST A and ARTIST B Goal line Fence at south end of Victoria University Rugby Field, March 1-8 or until removed

Interventions purportedly comprised 'defiant gestures towards an existing order of complacency and submission' (www.artbruit.com/interventions). Strong words, and ones that were lived up to more or less in the extreme range of works that constituted the project. Participation was free and any creative act was accepted leaving the project open to any and every variety of artistic engagement, meaning that art could strike anywhere, at any time.

Interventions undoubtedly draws on the conceptual art movements of the 1970s, their introduction reeks with anti-establishment rebellion, the potential for creative acts to be made 'without bureaucratic process, economic interests, or aesthetic compromise'. In other words, the notion that by bypassing the traditional institutions and their investment in certain notions of what constitutes art and how it may be consumed, power and freedom might be restored to the individual, allowing them to 'create meaning in his or her own environment'.

Interventions revelled in the notion of impermanence and lack of intrinsic value in the works produced or interventions made. Exhibition dates were often cited as from 'March 1-14 (or until destroyed or removed)', perhaps reflecting the desire of participants to be 'in the public's face' and therefore inviting destruction, or the fact that some projects, by virtue of their very nature, were ephemeral.

While some artists were rather unfortunate, Chris Clements' works at Glover Park were destroyed a mere half-hour following installation, others lasted beyond their projected timeframe. Goal-line, a red ribbon entwined through a wire fence, erected at the south end of the Victoria University rugby field by Artist A and Artist B from March 1-8, or until removed, was still spotted in situ on March 31. Was this a reflection on the nature of the intervention and its degree of defiance and confrontation or the choice of site? Did the hamstring-stretching, lap-sprinting rugby lads even realise they were being watched by art?

The interventions comprised magical moments, such as Kelly Joseph's Iceworlds, installed at various locations around the CBD on mornings from 1-5 March. Her miniature worlds, frozen in a bowl then upturned on the pavement, slowly melted during the day, leaving puddles of water with the debris of her worlds. Rather than being gestures of defiance, Iceworlds provided moments of beauty that temporarily intervened the otherwise barren cityscape.

While most interventions contrast the impermanence of the art with the permanence of the environment, at least one intervention by Alexander Wright, who erected a gateway at the entrance to Kensington Gardens, spoke instead of the very fragility of that environment. Although it proudly claims to be permanently installed, the gate and the gardens are doomed by the two-minute time-saving motorway intervention soon to be made by Transit and destined to disrupt this site. 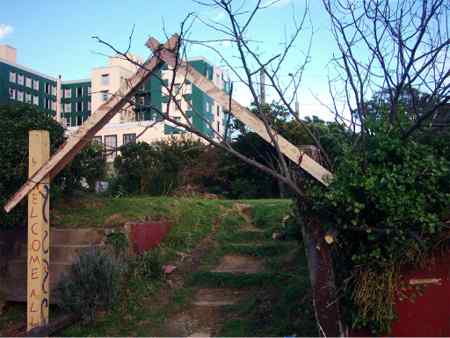 Some works had a more playful note, such as the hidden or candid camera inspired interventions. The posting of 'Out of Order' signs on park benches seemed as if they should have a live camera link to a studio audience. Cue the canned laughter while observing the bemused looks and smirks of casual passers-by.

Others still invited interaction and participation by viewers, such as Amy Howden-Chapman's mirror-topped weather blocks that asked viewers to write their views on the weather. In But I Know What I Like Katherine Allard asked members of the public to 'award' their favourite parts of Wellington city with gold stars, the result being an 'erratic and collective' public artwork. Such communal projects reflect the desire to place control back in the hands of viewers and artists, to close the often-perceived gap between art and the lived experience. By happening outside, free from the weight of tradition felt to be embodied in museums and galleries, Allard allowed the public to assert their long-held right not to know much but to know what they liked.

The recording of the interventions via a centralised website, means that this project shares with many other such conceptual projects the fact that the artistic acts exist only in the documented paraphernalia of the event. The question is, does such a project still have relevance in today's society, is it merely a recycling of artistic activity in the same way that fashion plunders its past for inspiration and trends, or does it in fact reflect the relevance of a social and political environment that is becoming increasingly unsatisfying to the grown up Gen X's who do not in the end share the privileges predicted in their heyday?

A different kind of fashion recycling was evident in Shoichi Aoki's photographs on show at the Dowse as part of the 2004 New Zealand International Arts Festival. FRUiTS: Tokyo Street Style exhibited a selection of Aoki's photographs that captured and documented a transient and flamboyant fashion movement in Harajuku during the late 1990s. The creation of Hokoten, ('pedestrian paradise'), effectively a public square and a novelty in Japan, resulted in a momentary avant-garde and creative burst of fashion that has now mostly disappeared. 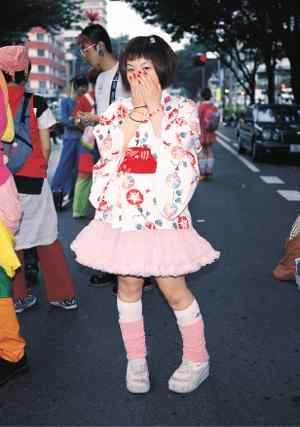 Japanese youths began to dress in a way that resounded with self-expression and individualism, a sharp contrast to the conventional view of Japanese as having a tendency to dress the same. Individuals were customising their clothes, mixing Western and Japanese dress, recycled and designer clothing to create a number of styles, from cyber, gothic-punk to cosplay or costume play where the characters from comics and animations were imitated.

As Aoki acknowledges, 'Here "fashion" is more about the art of "putting things on" rather than about the art of making clothes'. This was reflected in the exhibition layout where, rather than being blown up to life-size in a way that might assert the photographs themselves were' Art', they were displayed in a way that echoed the format of the magazine, also named FRUiTS and established by Aoki, for which they were originally taken.

A teenage, poppy feel was established through the asymmetrical arrangement of the photographs on bold geometric coloured backgrounds. This was enhanced by the magazine-like captions that documented the names of those photographed, their source of clothing, their 'point of fashion' or motivation and their current obsession. Sometimes these were poetry themselves, such as the 16-year-old named 'Snowflake', whose current obsession was 'looking at the sky and crying'.

Brendon Wilkinson branched out in a new style in his recent show Trip over my lips at Peter McLeavey Gallery. Well-known to art audiences for his miniature tableaux of everyday life over the last few years, he surprised with a two-dimensional show of acrylic and watercolour paintings. Although markedly different in form, his small-scale paintings exhibit continuity with his model-making practice, particularly in their continued obsession with the construction of real and imagined worlds.

Mixed with the sun (2003-04) depicts a naturalistic world in which severe multi-storeyed council buildings have become lost amidst overgrown forests, a seemingly ominous interaction of city and nature. Larger than life insects, reminiscent of dragonflies or moths, lurk in the shadows in a more menacing way than those in three other paintings, Happy like I'm with a girl, Trip over my lips and Arrived from all time.

There is a more playful sense to these works, which exhibit a quality akin to elaborate children's book illustrations, where plants grow eyeballs and insects burrow in and out of leaves and flowers in strange and fabulous ways. They also have a hallucinogenic quality, similar to the dripping, metamorphosing and cavorting images of nature developed in Disney's Fantasia. Glittering sparkles of light scattered over the painted surface emphasise the magical, theatrical nature of these imagined and surreal worlds.

The watercolour in nine parts, No place for now (2003), juxtaposes views of abandoned industrial buildings with evocative scenes of shadowy figures in a bathroom, green landscapes with aerial map-like views and astronomical scenes. There is a sense of zooming in and out, from macro to micro views of imagined times and places, of transgression of public and private spheres. This evokes in the viewer the simultaneous emotions of voyeur, detached observer or participant, accompanied by a gradual yet overwhelming impression of perpetual surveillance.