The Evocative Art of Denys Watkins

The reality imprisoned in a painting or pictorial construction is never the reality of the artist who conceived it. Yet, in a real sense, moments occur when the artist becomes all these individual pictorial realities simultaneously. Art is a self-externalizing reality without necessarily submitting to the autobiographical.

The mechanism of projection is, in an abstruse way, the key to the mechanics of Denys Watkins' art: for the reality he pictorially represents takes on the shape of cool metaphysical feeling cleansed of dialectic necessity. This is not to deny the function in his art of ideas that result from contraries: but such states result less from logical resolution than from those based on irrational conjunctions. Frequently diverse images seem to crowd together within a pictorial frame of reference as if gathered at random, each with its own presence, its individual as well as their combined reality. It is a reality that extends beyond appearances, a reality capable of welding the differences between dream experience and objective actuality, yet a reality that does not tolerate either aspects of this duality but seeks only their unification under the process of coagulation which is the basic enigmatic condition of his art. 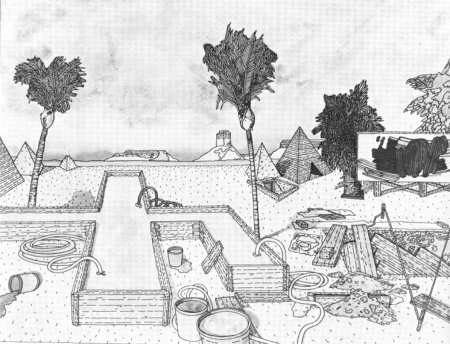 Speaking as an artist, Denys Watkins has noted the frequency with which people have accused him of being eclectic; of not being 'definite enough' in his art. This suggests a failure to appreciate what the artist is on about. Elements of eclecticism may well announce their presence in his earlier works, but as his ideas have matured, this factor has ceased to have any real relevance. The stylistic echoes and the borrowed images reminiscent of other artists are the result of a conscious, if capricious, act of selection where the element of recognition is a deliberate ploy essential to the basic idea and conditional to the pictorial formulation of a drawing, painting, print or construction.

The references are many, but they are prudently used. There are pictorial devices directed to specific ends, such as the portentous cast shadow of a man's head found in Beware of the Dog, and so reminiscent of tactics adopted by the Surrealists; or the Pop Art idiom type of imagery as accumulated in The Menu, April 1976 or presented in the print Night School. A more obvious relationship can be sampled in the etching Men from Atlantis where Cézanne's painting The Card Players has been unashamedly scavenged, and, although modified to fit in with Watkins' own pictorial intentions, remains obviously identifiable. At other times it is more the type of image, rather than any direct imitation that counts. This is definitely so in the case of images created by William Wiley and Jerry Kunkel, two American artists with whom Watkins undoubtedly feels a strong affinity. 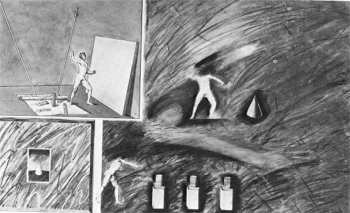 The circumstances behind the use of such ready-made images derived from other artists represents but one aspect of an artistic process much wider in scope and implication. The resonant visual echoes have the enticement of other associations which may indicate a visual pun, as in Hairlip; a narrative situation, as in Another Dawn; a literary connotation, as demonstrated with philosophical overtones in Gertrude Stein Discovers Rangitoto (reproduced in Art New Zealand Number 8); a sociological comment, as in Fringe Benefits; or more personal implications as Agua Puro where the artist presents an elementary stage in learning a language.

As a student, and immediately afterwards, during his first prolonged period overseas, Watkins indulged in a number of differing techniques which, while involving various media, were more concerned with establishing a range of descriptive pictorial images gathered from widely-scattered sources and treated in much the same way as an impersonal information input bank. But on his return to New Zealand he restricted his use of such technical methods as montage, and of his own choice concentrated on pen and indian-ink line drawings, to which was frequently added watercolour. It was a means whereby his artistic vision could be cleansed and his visual imagery reassessed. About this process, Watkins has stated: 'I wanted to remove myself from making marks that had anything to do with expression as such. I began using a tracing pen because basically it gave me a line that was consistently even all over. I was more interested in producing the image in the picture than in the marks the pen was making. It was a discipline. It was a way of becoming more involved with putting the drawing together, of concentrating on its construction, rather than becoming too involved with the expressive quality of the drawing. In a way I was aiming at something like the severity of Patrick Caulfield, yet without trying to imitate him. In England, and on the West Coast of America, there is that narrative stream of art involved in picture making that I am interested in.'

Although confining his working method to pen, ink and watercolour, Watkins endeavoured to extend any potential this technique possessed, so as to convey some of the visual richness and responsiveness that one might expect from other more malleable painting media. 'To come to terms with watercolour painting,' he says, 'not in a traditional way, but to make the paint work for you so as to achieve fresh qualities, is something that takes time to do.' Over the past few years the range of media he utilizes has again expanded. While at times he may seem to deny certain aspects of his skill as a draughtsman in order to achieve other almost primitive effects, the urge to exploit the natural possibilities of a medium remains - not as an end in itself, but for the enrichment of a work's total visual impact. 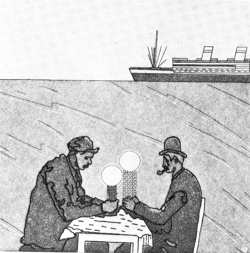 One major source for Watkins' imagery has had to do with constructing things. This can be seen in relation to the building industry, or in terms similar to a child playing with wooden blocks and any other small objects at hand, or in the practical devices that once were an essential part of Polynesian culture. The concentrated use of such imagery began in the early 'seventies when the artist was living on Waiheke Island. He relates: 'I started to set up constructions in a swamp and take photographs of them. After a while I got involved in doing drawings of them and this took over from constructing the actual things in three-dimensions. At the time there was a lot of building construction going on in the area so that it was just part of my natural environment. The building began from nothing, and there were lots of building materials just lying around.' Alongside of the suggestive close-up images of half-assembled rooms, foundations and other aspects of building construction, were frequently scattered the properties of the artist's labour, stretched canvases, open cans and tubes of paint, brushes and the like. The images are presented within a traditional, perspective-type space, and although extracted from events associated with that artist's experience and observation of life so that they carry the implications of a narrative function, the overriding impression is one of irrationality. This enigmatic condition - this almost riddle-like quality that continues to lie at the back of his work and remain a cause of frustration to the viewer - is the quality which gives to his work its latent, evocative power.

Perhaps the rationale behind this evocative quality, with its fortuitous juxtaposition of images, can be summed up in two recent productions by Denys Watkins, the etching titled The Academy and the reduced environmental construction called Work. Concerning this last piece, the artist has said: 'I originally made a man out of wood, cut on a jig-saw, but it did not have the right element in it I was after because I was interested in a slightly fetish quality, and the straw figure gave this without necessarily being too direct.' However, a more telling clue is contained in another statement: 'In my recent work, what I wanted to use were very basic elements like air, water, fire, and use them at an elemental level without turning them into a folk art. I've become interested in things that have been made for a purpose, out of a spiritual need rather than for their art's sake. Some of the constructions I have very recently made are the result of looking at Elsdon Best's book The Maori As He Was. I became particularly interested in the big 'hakari' stage structures and other devices and the Maori fish hooks. But here I am, an Anglo-Saxon, and while I've been thinking of Maori things, one cannot deny one's own culture.'

So: back to one's own culture. Even when Watkins is at work in his most narrative manner, his stage is often a setting for the banality of conventional life where allusions to the dreams and reality of romance abound; to situations optimised in pictures like The Eternal Triangle and Another Dawn. Such works are ripe for interpretation: the implications are usually left as options for the viewer. However, while Denys Watkins is the most serious of artists, always below the surface of his art lies the hint of the artist as comedian.