Twenty-five paintings selected from McCahon's work of six years (1971-6 inclusive) travelled in New Zealand from New Plymouth, where Ron O'Reilly assembled the exhibition, to Hamilton, via eight cities, from 1 September 1977 to 8 August 1978. Many citizens walked with McCahon a Muriwai of the mind. Some jumped for joy. Sourpusses crept from the room.

The main purpose of the exhibition was for a look over the shoulder at the distance we'd come and he'd come in six years in canvases shown in Dunedin (Dawson's Gallery), Wellington (Peter McLeavey Gallery), Auckland (Barry Lett Galleries) - his main series to be brought together that had been shown apart. McCahon up till now has had a different image in each port. How would the images get on together?

I looked forward to seeing the series A,B,C,D,E,F together for the first time. A was a seabeach Stations; B a pair of long black beachwalks; C the Stations, Walk with me, in the show; D I'd never seen; E was Jumps; and F, Comets.

They were all painted on the same roll of rough jute sacking with a dotted purple line to mark the selvage. The reason for wanting to see them together is that McCahon's ideas unroll with the material he's using, until he's used it up. He filled the room with series A to F. They are one roll of jute and that way are one piece of painting. You could see how he used the format of the ten roller blinds with Blinds and The Song of the Shining Cuckoo. Or the large paper with various series recently, from Teaching Aids on.

But there are only C series and a scattering of A (one from a series of fourteen) and E and F. And in the case of Blinds only one, to go with all of the Shining Cuckoo. There was only one other complete series: a Teaching Aids, no.2. So some point was lost.

None of the watercolours of 1971 were in the show. Nor was the best of the bigger canvases, the Urewera mural sketch. Nevertheless there were McCahons there to be enjoyed, and good ones. And how he uses the format is marvellous to see in the one Blind; in the C series, Jumps, Comets, Teaching Aids, and so on. 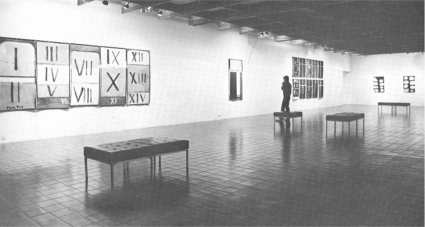 But before we can get to that, almost nobody knows the sequence of the exhibitions: what was in them, what was said about them by McCahon, and others. So, to get the record straight, here is a calendar of exhibitions and a selected list of writings, year by year.

1972 March 6.23: (Peter McLeavey Gallery). Are there not 12 hours. A question of Faith. This day a man is.
March 13.24: (Barry Lett Galleries) Paintings from this Summer '71 '72, Muriwai & Kurow.
February - early March: (Dawson's Gallery) Necessary Protection - Oaia.
October: (Osborne Gallery) Muriwai paintings in 1st Anniversary exhibition of gallery.
A. Green review of Barry Lett Galleries' exhibition in A & C vol 8 n6 4 (April); M. Dunn review of Survey Exhibition of 1972 also in the A& C same number; G.H. Brown review of Dawson's exhibition in A & C vol 8 no 5 (May).

1973 June: Parihaka Triptych (Govett-Brewster).
August 13.24: (Barry Lett Galleries) Jet Out from Muriwai, together with A& B series.
September 11.28: (Peter McLeavey Gallery) C & D series Mourning for Baxter.
The following statement by McCahon was published with the Wellington show and reprinted in Home & Building, Oct 1, 1973: 'People should know perhaps that I don't regard these canvases as "paintings", they shouldn't be enclosed in frames, they are just bits of a place I love and painted in memory of a friend (James Baxter) who now - in spirit - has walked this same beach. The intention is not realist but an abstraction of the final walk up the beach. The Christian "walk" and the Maori "walk" have a lot in common'. A. Green review of Jet Out in A & C vol 10, no 7 (Oct).

1975 May: (Peter McLeavey Gallery) in a mixed show according to Home & Building, June 1, 1975, p.51: 'further examples of the artist's religious preoccupations, variations on the theme of the Cross in different shapes and forms.'
August 18-29: (Barry Lett Galleries) New Paintings. 1. The Urewera Mural. 2. A painted drawing for the Urewera Mural. 3. Teaching Aids. W. Curnow. Review of Teaching Aids in NZ Listener vol 77, Oct 11,1975, p.22.

Necessary Protection Tau-crosses and capital Is held you till you'd seen how each image changed its references as you went over each edge, clustering symbolisms growing from one simple image. Upright Cross, light between cliffs, heavenly light falling to earth, eternal continuity of light in heaven, its momentary flash to earth, salvation, truth, path, way, a chart laid out on the floor on which McCahon sweeps paint along edges, aiming at a steadiness of motion (emotion), shifting levels of meaning, not a single easy answer. You accumulate them slowly standing there. 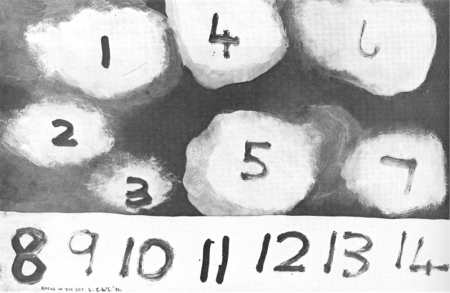 The Way is extended into beachwalks in A,B,C, & D series, actual walks in the gallery, with fourteen stops for the Stations of the Cross, reading as beach littoral seachange light-reflection pilgrim-age Christian Passion walk, Maori spirit walk to Te Reinga, or flight in the many Jet Out drawings of airplane/spirit/cross. In the C series we Walk with McCahon along a beach. In A the views of the sea alternated more or less with vertical kauris, dense masses of living cell reaching upwards to push into sky, horizons contrasted with vertical paths. B showed a road marked white on black, or surf edge. The images are literally unrolling before you, as the rough jute canvas sackcloth (mourning for Baxter) is unrolled and cut for each new seachange. In C the vertical frames didn't coincide with ends of canvases, so you couldn't tell which way the work divided, by canvas or by frame-line, one of which thickened into a Tau-cross. There was no regulating sequence of tides or times of day: only successively-varied unpredictable sea images made from wine-red black and white, each a new invention, only the  horizon a constant and the purple dotted line marking the selvage of the canvas. These pictures were simple seascapes, not clustering symbols, asking only that you walked and paused at each Station. There was no consistent seamood for each Station, no pathetic fallacy operating, rather sea variance and unpredictability day to day as constant background to the Christian walk or Way.

Jumps and Comets on same roll of jute continued unrolling movement round the walls idea. Jumps with dark spaces barriers nights voids to be encountered and physically leapt over with effort. In one in show the numbers 1 to 6 drive you on rapidly from one space to the next, but the dotted lines of each jump is a slow path of tiny movements for you to follow, holding you back, taking much more time than the rapid counting of 1 to 6. With the Comets the time change of lights in the sky, three white dots on black-purple, the darks edge to edge like one dark sky, but three strips of canvas registering three different times, the gaps between left to you to traverse. In one set (not shown here) a dotted line flew across the skies from one side to the other. 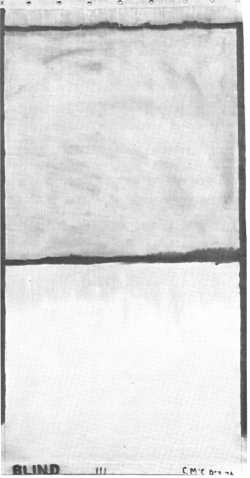 The vertical rises and horizontal walkings are tension means in series A to F as they unroll. The Shining Cuckoo is 5 vertical roller blinds, vertical edges or selvage blacked to frame them with gaps for the dotted twittering birdflight to pass through and across from side to side. The stations are to be read down each canvas, the divisions like horizons or window sashes. The surface is filled with references to a Maori poem, the Christian Stations (by numbers) to bird flight by dotted line-convention, to seascape through windows, three of them arched at the top. The image is therefore nearer in symbolic function to the Parihaka Triptych, Urewera Mural (better in the painted drawing version than the tidily finished mural) or the symbol-clustering of Necessary Protection.

But Blinds literally are blinds. The rings at top to hang them by, eyelet holes. The one word, inside each of the five, clusters many levels of meaning of blinds and blindness (Pauline or Platonic), seen and unseen, seeing and not seeing. The painted yellow at the top is a rolled-up blind, I guess, uncovering a painted window with a rain or mist-covered view, watery medium of paint dissolves image-clarity, or a view through wet glass. If you want to see, lift the window, roll up the blind, roll up the whole painting, the blind, and you'll see the so-called real wall of the gallery. The painting asks you to envision an act of rolling up a blind so you can see, put away the art. 'Art's not empty if it shows its own emptiness' Ginsberg declares in his Manifesto poem of 1974, the year of these paintings.'

I've always enjoyed McCahon most when he's allowed the paint format medium to do the work, not being satisfied always that the references to symbol systems don't give lazy-eyed (blind) people too easy an escape route into discourse on blindness and hidden or revealed truth etcetera, etcetera, which they could do without any painting in front of them.

Beyond these 1974 paintings the symbol clusters drop out of sight, replaced by activities of counting, referring still to Walks along the Passion Way, or time actions generally, or reference to the active opposition of Noughts and Crosses in the dark empty void spaces of black painted paper in the large series (not shown), or before that the image becomes a blank void or blackboard in which one by one the painter places, wipes out, places again the numbers in grids often cross shaped, making walks up and down and across the surface. With Clouds and Rocks in the Sky he placed the numbers again in the dark void spaces of sky on the variable uncertain unpredictable unrepeatable shapes of wind vapour breaths, which painted on the floor must have seemed like soft stepping stones across the darkness.