We believe that your readers should be alerted to facts regarding colour reproductions being sold for substantial sums of money as 'original prints'. To be described as an original print a work must be an etching, woodcut, lithograph, silk-screen print - the block/plate/screen made and printed by the artist (or under his direct supervision by a master artist-printmaker) in a limited edition of up to about one hundred. Other 'prints' now coming on to the market are photo-mechanical reproductions, taken from an original painting or drawing and printed by commercial printers, often in very large numbers. They have no significant qualities of uniqueness: nor can they even be expected to accrue any value as an investment.

In a recent Time Essay, entitled Who Needs the Art Clones, Robert Hughes reported that the Art Dealers Association of America (a group of 105 of the leading United States dealers) have mounted an attack on Nelson Rockefeller's reproductions of works from his private collection. The Association claims that they 'are not works of fine art, have no intrinsic aesthetic worth and have little or no resale value.'

In this country, people who buy colour reproductions under the impression that they are acquiring an original print are being deluded. If they are in any doubt they should ask the opinion of their nearest art gallery or reputable dealer.
PATRICK HANLY
VICTORIA EDWARDS
STANLEY PALMER

Cocktail Circuit Chatter and The Ruination of an American Suit

The article by Wystan Curnow on New York and the Toronto Sculpture Conference in Art New Zealand 10 truly belongs in the category of the 'social scene' or 'occasions' page as featured in Thursday morning's New Zealand Herald.

Furthermore, some notes on the cultivation of carrots, cabbages and composts may provide an interesting, if equally irrelevant, alternative for those not inspired by the aforesaid cocktail circuit chatter and the unfortunate ruination of an American suit.
DAVID MEALING

I am impelled to take up my pen, having just read the following quotation from a book on Roy Lichtenstein by John Coplans. Dealing with Lichtenstein's comic book paintings of the early '60's Coplans writes (1972): , . . . Lichtenstein is the only painter in the history of Western art (apart from Warhol, who used words in a few early paintings) to concentrate so exclusively upon the integration of words and figurative images in a narrative way.' 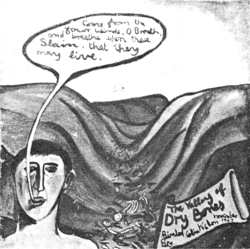 One cannot perhaps blame Coplans for overlooking the work of Colin McCahon, who used speech balloons in his 1947 religious paintings, pure calligraphy as message and form in his Elias and Practical Religion series, and words generally throughout his oeuvre including the now famous "I AM" painting.

After all McCahon is only a New Zealand (where's that?) artist, even if he has been painting for forty years. What, though, does Coplans mean by "the history of Western art"?

He means significant western art that has come to his notice. These days, if you want to become part of Art History you have to be in the right place at the right time and bang your drum hard. Let us therefore be bold in letting the world know that some history has been, and is being, made in New Zealand. Hopefully your magazine will carry the message abroad, and hopefully more New Zealanders will come to realise that good art is good art - whether or not it has been noticed by the international chroniclers and cognoscenti.
WARWICK BROWN