Three dramatic occasions in Dunedin in the winter and spring of 1978 emphasised that relevant art - art requiring audience involvement for its full realisation can be performed and produced locally. Such events are far less costly than the staging of importations from overseas. They belong to New Zealand and they help us discover ourselves.

In July the Globe Theatre mounted a production of Measure for Measure which allowed this major play to affect its audience directly. Shakespeare's poetry was spoken by most of the actors without strain or affectation. As a result of this unusual honesty, listeners were quickly transported into Shakespeare's imaginative world. Here, in mythical Vienna, they experienced the growth of an unbridled political power, with its corruption and debasement. At the end of the play the tyrant received his just deserts, reaping as he had sown, measure for measure.

On a larger scale, during September the Bach Mass in B minor was brilliantly presented by the Schola Cantorum and the Dunedin Civic Orchestra in the Dunedin Town Hall. The excellent acoustics of the high-ceilinged bell-like hall enabled Bach's spiritual message to ring out unchallengably. In this community work, Bach enjoins achievement through the renunciation of temporal vanities, steadfastness in the face of humiliation and crucifixion, exaltation through religious faith.

In October, the Bosshard Galleries exhibited Seven Paintings 1973-1978 by Jeffrey Harris. The opening function itself was a dramatic event. The spectators present soon became involved with the paintings, looking intently, searching, finding and deciphering details of the large and intricate pictures. 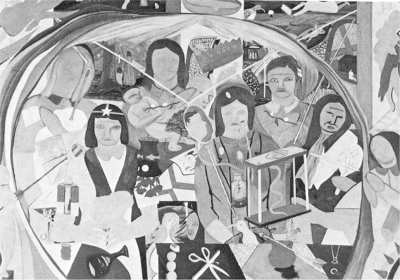 Their main themes are courtship and conjugal love; and the conception, nourishment, birth, and later tragic death, of an infant. The earliest work shown, Hymn to Love, makes it clear that these themes are set by the painter within a criticism of New Zealand society. Cruel aspects of this society have often been exposed in our literature, perhaps first by Jane Mander, and by many later writers. In this sense Jeffrey Harris's work belongs to a native tradition: although he is well-read in European art. At the same time his painting acts as a magnifying glass, collecting and concentrating some of the agitations of life today. The harsh bright colours of his pictures are both an expression of the emotional intensity which has produced them and a reflection of contemporary life.

Harris paints human figures and other symbols flatly, but his crowded images are not narrowly realistic. They are imaginative in the sense understood by Keats when he wrote to George and Georgiana Keats in September 1819:
'You speak of Lord Byron and me - there is this great difference between us. He describes what he sees - I describe what I imagine. Mine is the hardest task. You see the immense difference.'

Imagination gives Harris's paintings psychological and literary as well as visual meanings. For example, in the firmly-constructed Magnolia Bough and Imogen's Crown, a red-stained crown empties coins over the scene below, thereby symbolically throwing away the life which it should be preserving. This and the other pictures are enriched by miniature cameos of people and landscapes, all sharply observed and delicately, lovingly painted.

Most of these works result from Jeffrey Harris's tenure of the 1977 Frances Hodgkins Fellowship at the University of Otago. This exhibition at the end of 1978 indicates that one year is too short a time for an artist from outside Dunedin to settle in and produce adequate new work. R.A.K. Mason was another who proved that a longer period is necessary. It was during his second year in Dunedin that Mason wrote his important full-length verse play Strait is the Gate. Transcending the subjectivity of youth, this mature drama indicts the puritanism underlying New Zealand society, yet celebrates the common person's often unsuspected humanity and religious strength.