British Painting& Drawing from The Reign of Victoria

I don't think there has been a show specifically devoted to Victorian art at the Auckland City Art Gallery since the 1962 exhibition, British Taste in the Nineteenth Century. This is astounding, since the fifty works on display in the recent exhibition, all from the Gallery Collection, revealed that Victorian art is one of its strengths.

Tastes change. Most of these pictures were bought in the late nineteenth century and the first three decades of this century. Times were lean for Victorian art in the mid-century. Only in the 1960s in Britain and America did a revival of interest among gallery curators and directors really get underway. Auckland, it would seem, has had to wait until 1978. Some paintings and drawings were surfacing for the first time in years. Unfortunately, other notable and typical works of the period remained in storage - for instance John Barker's Chatterton in his room, a narrative piece, and Edouard Frere's The China Mender, a social realist picture, of which there were not any in the show. 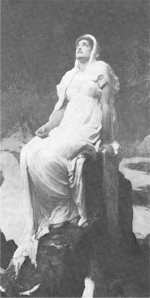 FREDERICK LORD LEIGHTON
The Spirit of the Summit 1894
oil on canvas, 1987 x 1016 mm
(collection of the Auckland Art Gallery)

In one respect this exhibition lacked ambition (perhaps there was not sufficient money available). Why only works from the Auckland City Art Gallery? There are many fine Victorian paintings elsewhere in New Zealand - for instance, Winterhalter's portrait of the young Queen Victoria (1842) in the Auckland Institute and Museum; New Zealand Breweries' Summer by Reynolds-Stephens, and The Relief of Lucknow by Thomas Barker (both formerly in the collection of Sir Ernest Davies); Tissot's Waiting for the Train and I.F. Lewis' Bouquet in the Dunedin Public Art Gallery; and Leighton's Teresina in the Robert McDougall Art Gallery. And there are others. What is needed is a show bringing them all together.

Nevertheless this exhibition presented a good range of mid-to-late Victorian art. There were examples of many common and popular types of imagery - portraits, anecdotal pictures, exotic scenes of distant places and people, picturesque rural genre views featuring Highland shepherds and the odd cow, pretty and charming children, urchins and idlers, nostalgic old age, beautiful neo-Grecian ladies, remote and decorative, a few literary pieces including one case of Keatsian melancholy and passion, and a swag of competent but not very startling landscapes, seascapes and architectural prospects. 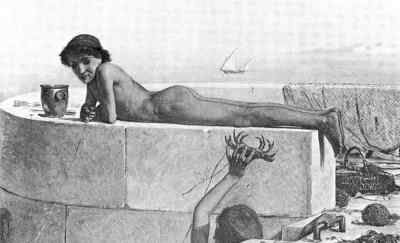 There were some notable absentees. No Pre-Raphaelite works from the 1840s and '50s appeared. Nor, with the exception of Frith's excellent literary-anecdotal Pope makes love to Lady Mary Woltley Montagu (1852), were there any works by early Victorian masters such as Etty, Landseer, Maclise and Mulready (though Maclise's The Spirit of Justice is in the Gallery collection).

The highlights of the show - all good examples of the work of major artists of the period - were the paintings by Alma-Tadema, Bramley, Frith, Leighton, Millais, Tissot, and a Rossetti drawing. The two Alma-Tadema oil paintings were set in the remote past, but expressed very Victorian preoccupations: Cleopatra - beautiful, alluring, with a poisonous look - a classic nineteenth century femme-fatale; and Egypt 3000 Years Ago, epitomising the High Victorian taste for sumptuous, exotic and rich ornamentation and decoration. The Leightons, too, exemplified a taste for the historical, the mythological and the sensuous spiced with a touch of mystery. Yet the ladies in Melittion and The Spirit of the Summit are unmistakeably Leighton's contemporaries. 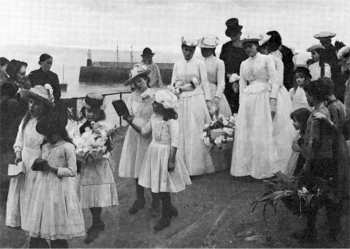 Bramley's Of such is the Kingdom of Heaven, with its girls clad in pure white carrying a small coffin, combines beauty, innocence and death - another standard Victorian recipe. To modern eyes it might seem sentimental - at least that is the accusation frequently levelled against pictures of this type - but the rigour of the design, the superb paintwork (especially in the whites) and the astutely-observed and rendered expressions and gestures of the participants arid onlookers make it a memorable image. Millais' Blow, Blow Thou Winter, Blow, which depicts an abandoned mother and child huddled in a snow-swept landscape (a man walks away in the background), is another unashamed tear-jerker - or is it that the Victorians more readily confronted death and loneliness, with a freer and less suppressed outpouring of emotion than is allowed by the 'cooler' styles prevailing today? The expression of intense feeling also characterises Rossetti's fine pencil-study for the predella of his 1872 version of Beata Beatrix. The line is spare, the shapes taut and explosive: not a pencil mark is incidental to the visualisation of the crucial moment of heightened emotion. The best Victorian narrative and anecdotal painters (and these included Alma-Tadema, Leighton, Millais and Rossetti) were as attentive to the formal aspects of picture-making as any twentieth century abstractionist - that is, to the handling of paint as an end in itself, to the relationships of shape and colour, and to the relationship of the image to the frame (unfortunately in this exhibition only Burne-Jones' Fortitude and the two Alma-Tadema oil paintings still had their original frames - which were always an essential part of the visual experience in Victorian painting). The first concern of these artists was the 'look' of the picture. They realised that intense feelings or a strong moral sense alone could not make a good picture. First and foremost, a painting had to work as a visual object, as an arrangement of coloured shapes on canvas, regardless of the subject.

This realisation was most evident in Tissot's Still on Top, a superb painting. The trivial incident depicted, signal flags being raised by a sailor and two elegantly-dressed ladies, was primarily a pretext for the performance - an immaculate and energetic play of multi-coloured patterns in flags and dress (reds, blues, white, yellows and blacks) set off against the lush greens of foliage and lawn. It is a delight to the eyes.