From time to time - often enough these days to justify its existence alongside Auckland's professional theatres - New Independent Theatre features a production of such style and spirit that one might wish to engrave its images and sounds enduringly on the mind. Something has clicked into place, and it seems as if play, director and cast were meant. for one another. Three such occasions this year spring to mind: Derek Wooster's staging of Bruce Mason's The Pohutukawa Tree; Athol Fugard's Boesman and Lena, directed by Tony Forster at the Outreach Community Centre; and, most recently, John Curry's version of Brecht's The Good Person of Setzuan. It is worth noting all three directors are young - two of them still in their twenties - and all have had some (limited) directional experience in professional theatre: Wooster and Forster at the Mercury, John Curry in Tauranga where, in May, he directed Middle-Aged Spread, using two N.I.T. players in his cast.

Of the handful of fine, mature Brecht plays, The Good Person is not the most favoured: one may see it once to every three or four Caucasian Chalk Circles and two Mothers Courage. In a way this is curious, for its exploitation of an individual moral dilemma in an environment where beneficent charity leads to greedy exploitation and abuse by both the haves and the have-nots should touch a responsive string in even a right-of-centre bourgeois heart, or - since it is Brecht - mind. Perhaps the divided Shen-Te is just not such an irresistible character as Gruscha, Judge Azdak or Anna Vierling; or perhaps some of us find the combination of China, itinerant Gods, tobacconists and airplane pilots a bit hard to take. On the other hand, while apparently being more accessible and homogeneous in their epic style, the more popular plays have fooled many a reputable director by their treacherous complexity. Both 'grand' Chalk Circles of the last decade in Auckland (Richard Campion's at the Mercury in 1968, and the late Edna Harris's at N.I.T. in 1976) suffered badly from romanticisation. 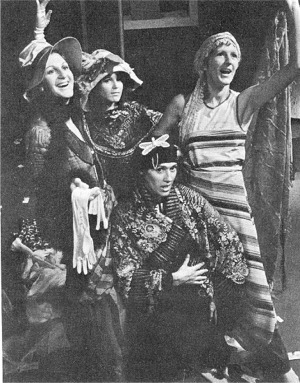 Whatever the case, John Curry went a long way to demonstrate that the tale of Shen-Te 'or Neighbourly Virtue Unrewarded' ranks with the richest of Brecht's masterpieces - and, along that way, avoided the pitfalls that have trapped much more seasoned directors. No silly tinselly chinoiserie here: just a lovely, tongue-in-cheek touch of oriental courtesy; nor any sentiment - or outrage-provoking dwelling on the virtues and vices displayed. Instead, a clear definition of the full-blown characters - Shen-Te, Tang the water-seller, the pilot - versus the chorus, in clowns' makeup and doubling as 'set' on the mercilessly white stage: forming a town, a doorway, a tree for the pilot to hang himself on, a production line. But the cigars begged, borrowed or stolen, and Mrs Shin's washing were palpably real, as was (to all intents and purposes) the baby bulging under Mr Shui-Ta's capitalist suit. The script's humorous possibilities were richly exploited: who would have thought of two seven-foot gods (the more ceremonious ones, played by Derek Wooster and Russell Shipman, both six foot plus, and wearing cothurni) and one five-tout one (Nell Weatherley), full of fuss and concern, and compelled to stand on a chair in the judgement scene? For although the players faithfully presented the tale and shunned whatever Stanislavskian 'Method' they knew, the production was full of human touches: the meddling, shrilly-arguing relatives; Elena Wright's prune-faced Mrs Mi-Tzu; Paki Cherrington's ebullient rich barber; Pat Scott's vixenish mother-in-law. Throughout, Penny Monro's Shen-Te/Shui-Ta, walking the tightrope between a totally appealing and a coolly 'observed' performance, held the perfect balance. Only her cabaretesque delivery of the difficult final monologue was misjudged: not by her, but by John Curry, for once leaning a shade too far towards complete alienation. The rest of that scene, including the ascension of the Gods on their cloud, was masterfully managed, clinching the effectiveness of the presentational style adopted in every aspect of the production.

The mise-en-scene, while relying on a good functional use of space and movement and lively grouping, had a cartoon-like definition of outlines filled with 'flat' colours, reminiscent of James Ensor's paintings (an effect enhanced by the chorus's mask-like faces and the white background) which was carried through in the presentation of the Gods, who had only fronts to their masks and robes. Alistair Blennerhassett's lighting was fully in keeping with this; so was, last but not least, William Dart's music, expertly played by a combo on stage but - it must be said - not well enough sung by some of the players to do it full justice. The ensemble numbers among the catchy Kurt Weillian song settings came off best.

For John Curry this judicious production (its season was regrettably cut short owing to Penny Monro's illness) put the seal on an apprenticeship that's had its ups and downs. Like Tony Forster, John Curry had his first taste of the theatre in an A.U. outdoor Shakespeare production, playing a vigorous, if somewhat rubber-legged and short-winded Antonio in Twelfth Night (1973) - the comedy he was to produce himself at N.I.T. in 1976. He is a talented comedian and never fails to carry his weight in any production he appears in. His acting credits by now add up to a quite respectable list: Julius Caesar (1974), Much Ado About Nothing (1975) and The Caucasian Chalk Circle (1976) with N.I.T.; Feydeau's Chemin de Fer (1976) with the Mercury; a variety of N.I.T. lunchtime productions and a stint of several months with the original Sazou Clowns Street Theatre group; most recently, U.T.W.'s The Beaux' Stratagem and his own The Dust Behind the Door, again at N.I.T.

However: by his own confession, he has always preferred writing and directing to acting. Besides capping revue material, three plays of his have been staged to date (The Dust Behind the Door, directed by Paul Stone in September, was not his 'debut' as reported elsewhere). They have typically suffered from a surfeit rather than a lack of good, provocative and irreverent ideas, flung at the audience like a handful of confetti: almost literally so in An Opening, which he directed himself for N.I.T. lunchtime theatre in 1975. This was a witty sketch of a new Supermarket's initiation rites, which went down quite well despite the rough edges. This was not the case with The Real Woman (also at N.I.T.) which, following sharp on the heels of his disastrous production of Snoo Wilson's The Everest Hotel for U.T.W. in mid-1977, prompted his decision to 'go bush' for a while.

The Dust Behind the Door certainly showed a marked advance on previous efforts. Its first scene is outrageously funny: a rather timid homosexual is desperately trying to get out of the predicament of having captured the wrong man instead of the All-Black hero he tried to kidnap (not for immoral purposes, by the way) and has little joy from the fairy he's picked up to help him solve his problem. But the second half succumbs to Curry's usual problems - too-broadly drawn stereotypes, and an excess of ideas: not only Rugby ethics, Apartheid and fairy-mugging, but even religion and Irish blarney come in for broadsides.

An exuberance of ideas and the kind of mettlesome impatience that chews too fast for a good digestion: that is also what used to mark, and occasionally mar, John Curry's productions. He started promisingly at N.I.T. with David Hare's Slag in May 1976. The play had failed almost everywhere else because of its blunt, hard-bitten feminism: but, handled with a light touch, it turned out to be N.I.T.'s blockbuster success of the year. An important factor in this success was the casting: the play proved to be a brilliant vehicle for the talents of Deanne Williamson and Sylvia Rands. John Curry has a way with all-woman casts, as was evident also in his productions of Tennessee Williams' Hello from Bertha in 1976 and, early this year, of Pam Gems' Ousa Fish Stas & Vi, the play that lured him out of his premature 'retirement' and did much to clinch his decision to enrol for Mervyn Thompson's Diploma of Drama course. Perhaps it was this orientation towards women's plays that lured him into that unfortunate Everest Hotel; so, rather perversely, he chose to do Genet's The Maids (N.I.T. 's last 1978 lunchtime production) with an all-male cast, which turned out less satisfactorily than his concurrent Good Person.

The success of Slag led to his four-months' tenure as N.I.T.'s first theatre manager / factotum which, because of its ill-defined brief, proved rather too exhausting a job. After it, he directed his Twelfth Night, a madcap production that flew off at as many tangents as a boxful of Guy Fawkes crackers. The characters rolled out of a wardrobe on to a stage that looked like Bosch's Garden of Earthly Delights; his Toby Belch was a reincarnation of Bacchus, his Aguecheek a superannuated little lord Fauntleroy; his Orsino had a Teutonic, and his Maria a Scottish accent. William Dart's music was inspired by the 1930s cafe dansant and included a tango played by net-stockinged hostesses on two violas. All this inspiration not only failed to serve the play, it didn't capture audiences either, despite much delightfully entertaining whimsy.

Some vestiges of this tendency to broadcast good concepts too generously were still evident earlier this year. In Dusa Fish Stas & Vi the idea to pull the entire production forwards on to the apron stage and into the laps of the audience, was fine: but his placing of the actresses from time to time across the wide span of the stage occasioned a rather tiring Wimbledon effect; and there was no real call for the huge tin-foil wardrobe and the too-dominating hoarding posters.

In The Bacchae ,produced with Diploma of Drama students in August, he divided the role of Dionysus between a foursome of masked players: but the 'ubiquity' effect was not carried through in all its consequences, and the inconsistent use of masks by some performers (notably Pentheus) blurred the final impact of the play. Still, in some very important respects these productions testified to the kind of growth towards good direction that culminated in The Good Person: inspired, dedicated ensemble work of all involved, attention to detail, and-surfacing in The Bacchae - a disciplined visual imagination and an altogether coherent concept of style. If the Diploma of Drama course has taught John Curry this, it has been well worth his while taking it. In any case, it looks as if Hamilton's Theatre Technique Trust and Waikato University have got themselves a well-qualified and highly-talented successor to Dick Johnstone.