Having been questioned all week by persistent journalists and interviewers, his film finished but not yet released, with no feedback, David Blyth admitted feeling rather 'neurotic'. . . vulnerable even. All that energy expended, his film guaranteed commercial release, poised expectantly. . . but how will the audience react?

When Blyth talks about his film, various adjectives recur - 'controversial', 'definitive', shocking', 'provocative'. Angel Mine obviously hearkens back to Circadian Rhythms days in some respects with the same basic inclination to tackle social problems uncompromisingly rather than escape from them and churn out more of the Hollywood-style sop. Nevertheless, Blyth is wary of drawing comparisons between his two films. Blyth specifies among those directors who have most clearly influenced his style, Bogdanovich, Wenders, Fassbinder, Herzog, Visconti, Altman: and particularly the surrealist film-maker, Luis Bunuel. Bunuel's influence, so apparent in Circadian Rhythms, is still visible in Angel Mine, however tenuous the connections. 'Un Chien Andalou has never been rivalled in originality', says Blyth. 'The visual surprise element is still there. I see film as quite magical. I like to pull rabbits out of hats to surprise people'. To shock the pedestrian middle-class out of their complacency. To avoid the standard New Zealand film narrative and confront social issues. He mentions as typical of an escapist trend, Runaway, Landfall, Test Pictures, Solo and Sleeping Dogs. 'I mean, how many New Zealanders succeed in their attempt to flee from the city and carve out an alternative life-style for themselves in the country? Angel Mine is about hanging in, in the city.'

There are no bohemians in Angel Mine. The couple, played by Derek Ward and Jennifer Redford, are confirmed city dwellers. In their sterile brand-new Lockwood show-home, isolated in the middle of a Pakuranga subdivision, haven for the nouveau riche, they try desperately to conform to the image of the ideal young couple in the commercials. They are surrounded by the material trappings that the slick advertisements insist are requisites for happiness: yet real happiness eludes them. The phantom doubles or Doppelgangers, dressed in shiny black vinyl suits, represent the physical, sensual, animalistic aspects of the couples' personalities, so effectively subliminated by the mass media. 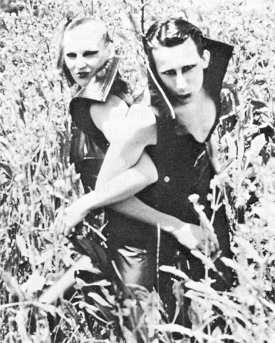 Derek Ward and Jennifer Redford
as the doppelganger couple

'I am very interested in the viewer-media transaction. All that enables us to survive in the cities are our fantasies, our dreams, our daydreams. What's worrying me though, is that these escape-routes have been closed off through the media, particularly television.'

Angel Mine, says Blyth, is more like a psycho-drama than a mental health documentary (although it seems to defy any one genre definition). 'We're not dealing with mortgages and time payments, we're dealing with the psychological aspect, with their sexual perversions for instance.' Angel Mine deals in a light-hearted mock-serious manner with a number of controversial suburban issues sexuality, marriage, death. . . 'all these things we all do, we all go through, but can't talk about.' Blyth feels that the frankness with which he explores the nature of New Zealanders' attitudes to sexuality will undoubtedly shock many viewers. Camera held in static two-shot on couple 'humping', arousing each other while munching chips in front of T.V. 'Angel Mine', writes Blyth in the press release, 'represents the coming of age, if you like, of the young couple but also of New Zealand cinema erotica next time!!!' All rather tongue-in-cheek, with a good sense of humour.

DAVID BLYTH, was born in Auckland in 1956, did a B.A. at the Auckland University (Art History / Anthropology), joined Alternative Cinema in 1974. He was cameraman on the student film Cancelled; wrote and directed Circadian Rhythms; was Third Assistant to the Director, Tony Williams, on Solo; wrote, directed and co-produced Angel Mine, 1977-1978.

DIANA WARD has studied Film at the University of Auckland and the School of Fine Arts, Elam and is also Contributing Editor to MOVIE.