On an average day, the Centre of Contemporary Art (CoCA) atttacts 250 visitors. During the months of July and August 2003/ attendance numbers rose dramatically. The fifth Christchurch Arts Festival was in full swing and CoCA was caught in the frenzy. They came in their masses and day in, day out for a three week period, CoCA was teeming with people. I passed the gallery on several occasions during the Festival and believe me, the place could have been mistaken for Westfield Mall on Christmas Eve.

The Festival is well publicised and this, combined with two impressive exhibitions, proved to be a recipe for success. A rare opportunity to view prints by German expressionist, George Baselitz was a Festival favourite and high on the agenda of the viewing public. However, the hive of activity was found in the downstairs gallery where My Place made its debut. Our innate curiosity with the lives of others might explain why an estimated ten thousand people visited the exhibition. I, too, joined the throngs and embarked on an intimate viewing experience quite unlike any other.

Glenn Busch is the mastermind of My Place, an exhibition of 68 photographs and text documenting local people in their favourite places; be it their sitting room, car or a Buddhist temple.

There is no denying that we all welcome the opportunity to see how others live their lives, and in doing so we contemplate our own existence - this is by far, the beauty of My Place. Let's face it, people are interesting to look at and Busch is no stranger to this concept. Interviews and photographs from previous publications such as You Are My Darling Zita and Working Men are simply unforgettable. Busch skilfully awakens our social conscience and many will agree that this recent portfolio of images and text are of equal merit.

My Place is just one of several documents that will be archived by the University of Canterbury as a social, cultural and artistic record of our community. For close to three years, under the instruction of Busch, photography students from the University's School of Fine Arts have worked steadily on A Time in Place, an ambitious project which captures the identity of Christchurch people in the new millennium.

The first public showing of this time capsule was revealed in 2001 when The Aranui Project, a collection of images and text featuring Aranui High School students, was exhibited at the School of Fine Arts Gallery. My Place and The Aranui Project share similar themes: memory and people's association with place. Following the exhibition, the University gifted one hundred prints from the project to Aranui High School where they are now used as educational resources - evidence that Busch and his team of students are making a valuable contribution not only to New Zealand documentary photography, but to the wider community. There is every intention to exhibit and publish as many of the works as time and finances will permit.

Students who participated in My Place include Uiga Bashford, Maria Buhrkuhl, Hanne Johnsen and Tim Veling. Co-ordinating interviews for the project was a delicate and time-consuming procedure. For this very reason, Busch concentrated on the development of the text and delegated photojournalist, Bruce Connew to oversee the photographic process. Connew has taken the majority of the photographs, assisted by Dean Kozanic from the Press.

The people chosen for My Place are from very different walks of life and remind us that Christchurch is anything but mono-cultural. Where does Busch find these people you may ask? In January 2003 over three hundred people responded to an advertisement in The Press seeking volunteers for the My Place. Busch then went through a process of elimination and interviewing.

Locations vary from everyday places such as street corners to the local dairy. Others include private settings such as Edna and Helen Yates' lounge. The explanations that accompany the photographs are at times sentimental, humorous, sad and deeply moving. The photographers must be commended for their ability to portray the character of their subjects and relate their image making to the narrative in their approach is sincere, honest and patient. This makes for compelling viewing.

It is difficult to select one work that sums up the exhibition - the theme thrives on difference. Everyone will have a favourite character and mine would have to be Bill Straight. 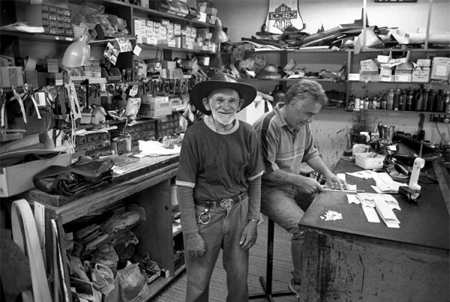 I’m a loner really, so it’s company for me to go in and have a bit of a yarn for half an hour. They‘ll have a laugh with me, have a joke with me. I feel at home with them, they’re good people. Turn their hand to making anything those guys. Oh yeah, clever, couldn’t wish for better people. It’s important, I suppose, to have people. I never married – never really interested in it. I’ve had a couple of friends and that, but, you know, we only live from day to day. Live life to the fullest would be the way I’d put it. I just say gidday to anyone in the street. I certainly do. I used to have a dog once too. Labrador Kelpie cross she was but not any more, she’s gone now. I used to walk her all through town and even today people still come up and say where’s your dog. She went on the 25th of November – gone 27 months now. I still count the months. We used to go round the river, chase after possums and that. If she found one, boy, that was hers. She’d bowl you over to get it. She was put down in the end. I didn’t want that, but there you are, that’s life, something you’ve got to take. Sad day. I miss her all right. I’m still a pretty active sort of a guy. I work in a bike shop six mornings a week and on Sundays I walk out to the Riccarton Markets, keeps me trim. After working at the bike shop I usually come into town and visit people – all different sorts of places. Give’m a hand if I can. Generally though I’ll always go into Longhorn first, you couldn’t wish for better company than those guys. Oh yeah, A1. They’re good friends them guys – always will be. Bill Straight, in picture and words from My Place, Christchurch 2003

Bill is familiar to many who frequent the inner city, and up until recently was accompanied by his beloved dog. I had often seen the two of them in town and assumed that Bill was a lonely man. He is a self-confessed loner but his contribution to My Place suggests otherwise. His favourite place is the Longhorn Leather Shop where he yarns with his friends. He likes talking to people which explains why he visited CoCA on a daily basis during the exhibitions instalment. My Place challenges our perception of others and in this regard it will be of great social value for many years to come.

This heart-warming collection of images (and text) is documentary photography at its very best. I look forward to revisiting these favourite places when My Place is published sometime next year. I urge you to read it - you will not be disappointed.

Next door at the Christchurch Art Gallery the party is over and the hard questions are being asked. The inaugural exhibitions have been removed and those in their place are a tad anti-climatic: the jury is out on Nigel Buxton's recent offering. Bluebeard's Castle is a collection of paintings which illustrate Bartok's opera. Black painted walls and spotlights certainly emphasise the exhibition's theatrical theme, but it seems odd that a series of paintings inspired by an opera are not accompanied by a soundtrack.

Across the way, a small collection of Len Lye's kinetic sculptures, photograms and scratch films have been well received by gallery-goers. This is a wonderful exhibition but the full potential of Lye is not realised. There are too few works and his contribution to New Zealand sculpture is underrated. Surely, Lye would have wanted a commemorative exhibition to include more movement, more noise?

Space was obviously an issue as the Cranleigh Barton Drawing Awards are located within the same gallery. The Cranleigh Barton Drawing Award exhibition is a somewhat narrow representation of contemporary New Zealand drawing. Realising this, the Jonathan Smart Gallery in conjunction with Gridlocked, mounted a contentious group show featuring drawings rejected by the judges of the award.

The Salon des Refuses pokes fun at the establishment but also reminds viewers (or more directly, the judges) that excellence in drawing is hard to define. Perhaps one word that could be used to describe the rejected drawings would be 'grunge' as opposed to the more 'polished' pieces at Christchurch Art Gallery. Many Salon contributions are reminiscent of early work by Saskia Leek, Tony De Latour and Violet Faigan, among others.

Ironically, The Salon des Refuses had only one condition of entry: not all submitted works would be submitted for the exhibition. Those lucky enough to be selected could look forward to winning The Salon des Refuses People's Choice Award. Members of the public were invited to place a gold star under their favourite drawing. The artist with the most stickers under his or her work received a prize pack of goodies in recognition of their efforts. Contenders for the award were: Ri Williamson, Nicola Shanley, Samuel Hodges, Brenda Nightingale, Frances Black, Zina Swanson and James O'Connell, the lucky winner. 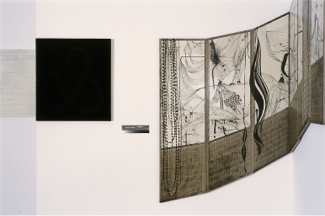 JULIA MORISON no names for things no strings for 03 2003 Mixed media on board, dimensions variable

The opening of a Julia Morison exhibition creates great excitement amongst her Christchurch fans. Who can blame them? Her latest offering is simply breathtaking. Close to one hundred decorative panels entitled no names for things no strings for 03 graced the walls of the Jonathan Smart Gallery. Morison presents her audience with a seductive and alluring frieze which draws on the work of Aubrey Beardsley, Max Ernst and M. C. Escher. Highly illustrative, these elegant mixed-media panels portray a world where tight rope walkers, acrobats and strange anthropomorphic creatures go about their business.

These paintings are created with great confidence and skill. Morison's attention to surface detail and her application of ink, resin and paint is admirable. At times, fine line work resembles muscle fibre and hair, a subtle yet effective reference to the body. The use of varnish on almost every panel creates a crackled surface which bears similarities to antique porcelain, topographic maps and recent paintings by Heather Straka.

Clearly, earlier projects, namely Angels and Flies, Codex and Decan continue to inform Morison's practice. A modernist agenda is identified by the placement of small familiar oval forms between panels and solid black sections of paint against a crackled background. Quite the opposite is achieved in other panels through the use of mixed media including doll's eyes, cotton and the infamous black feather boa, featured in both Madame & The Bastard and more recently Angels and Flies. The Madame is orchestrating this series and the Bastard is nowhere is sight, or so we are lead to believe. The mysticism that these works invoke could easily be compared to that of Madame & The Bastard. Viewers are invited into Morison's surrealist landscape but at times entry is denied. These panels are, in true Beardsley style, provocative and sexually suggestive. Conceptually, they keep one guessing.