Bloodlines, blood ties, the continuity of the human: these are Robyn Kahukiwa's themes. This artist's practice flourishes in the ambivalent spaces between high art and low illustration, between paintings for the nationalist narrative and posters for everyday people, between stark message-making and an ecstatic vision. She is the tribal painter as seer.

Kahukiwa's art sparks and ignites at the point of cross-cultural collision, where historical revisionism generates howls of feedback, theatrical platforms of dissent and media sensationalism. If globalisation delivers an amnesiac culture with an emphasis on the immediate, Kahukiwa's touring exhibition Mauri Ora! - a selection of recent work - is intended to remind us of who we are and where we are. We have other revisionist artists of our bicultural story but, whereas most of them dab nervously or inexpertly at the borders of traditional representations, Kahukiwa boldly revisits the museological in order to displace its colonising authority and replace that with tribal mana. 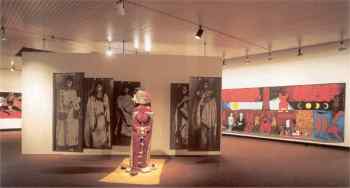 Kahukiwa's art activism uses art historical tradition, deriving from Paul Gauguin and other post-utopian artists (Picasso, Matisse), to propose an exotic formalism. Her stylised paintings about lost-ness, about the disappearance of meaning, the evaporation of identity - specifically, Maori identity - seek, by fusing past and present, to enact a desire to recover a simpler world of reciprocal responsibilities and social harmony. This is art as a form of evangelism and significantly it's helping shape our view of ourselves as a nation: such is the force of Kahukiwa's pictorialism that, at the beginning of the twenty-first century, you see its imprint everywhere.

In the 1960s and '70s, as a young mother living in the state housing neighbourhoods of Wellington, Robin Kahukiwa began tentatively producing artworks depicting ghettoisation, detribalisation, disempowerment and a psychic sense of loss. Perhaps it was because she had grown up overseas and returned to New Zealand in late adolescence where she rediscovered her Maori lineage, but Kahukiwa's paintings seethe with a sense of displacement. The Maori she focused on - factory workers, gang members, young mothers with young children - wrestle with their marginal status and perhaps with their ontological status too. Gauguin's guiding hand is evident, but so is that of Nga Tamatoa, local Black Power. 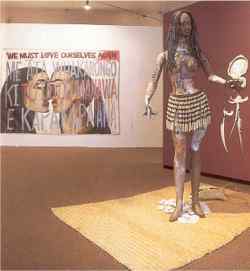 Installation from Robyn Kahukiwa's Mauri Ora! showing (left) Self Portrait/Ethnicity (2000) and (at back) We Must Love Ourselves Again (2001)

Kahukiwa's period social realism belonged to the heroic proletarian school, exemplified by Garth Tapper, Trevor Moffitt and others: it was emphatically class-conscious at a time when the nation still paid lip service to egalitarianism. Her gauche paintings in retrospect manage to suggest that the marginal was actually at the heart of the New Zealand experience: in the suburbs everyone feels alienated.

The paintings of the 1970s also reveal a growing sense of politicisation. Discontent leads to dissent and the signs are there: in the Afro hairstyles of young males, in the broken hei-tiki, the abstract wall mirror in the shape of a dartboard in the middle of which the silhouette of a Maori labourer is depicted. Gradually the artist began to foreground emblems of cultural identity, developing them into a cohesive iconography. 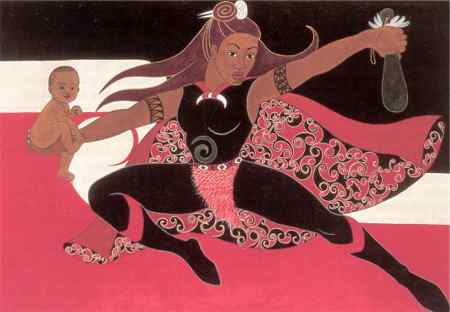 Instead of presenting Maori people as the alienated Other, a decorous margin to a Eurocentric assimilationist perspective, Kahukiwa elected to create an ethnocentric communal art using inside knowledge. Wahine Toa and other series from the early '80s invoke Maori cosmology to assert mana tangata - the importance of people and perhaps more specifically hine rangatiratangata - the authority of woman. The land itself was now personified as Papatuanuku, the Earth Mother: Aotearoa had been reconceptualised as the domain of the tangata whenua. Christianity made way for animism and once again a pantheon of gods inhabited the natural world, all lovingly depicted by an artist now able to deploy a complete colour wheel.

This revolution was grounded in Kahukiwa's embracing of matauranga Maori, or Maori knowledge. Her ethnocentric art was intended as a form of therapy - holistic healing for a people still smarting from the impact of colonisation, a people still victimised by the frontier view of history. Yet speaking for the dispossessed, for a community of interest, is a complex business given the disjunctions between the Maori working class and the Maori middle class, between Maori males and Maori females, between rural Maori and urban Maori, between conservative Maori and radical Maori: nga iwi Maori is a complex entity. 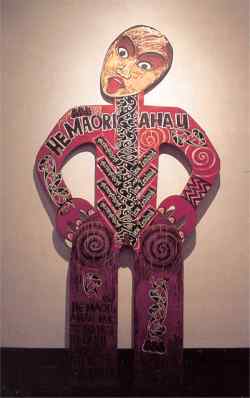 Gradually Kahukiwa has diversified into poster art, into billboard art, into artwork for books and magazines, into murals for meeting houses and community halls (and, yes, even into installation art: Mauri Ora! contains dolls and mannequins as overdetermined centerpieces for an array of mixed media). Her visual style has always incorporated a variety of pictorial source material - hard-edged '60s pop art, Maori folk art, the modernist legacy of McCahon, the illustrative styles of the Mexican muralists Diego Riviera, Jose Clemente Orozco, David Alfara Siqueiros, the symbolism of Frida Kahlo. Deploying an art practice whose main motivation is to embolden, to mobilise, to educate, Kahukiwa simplifies and purifies, challenging the ethnographic romanticising of say C.F. Goldie with warrior figures and in particular woman warriors: wahine toa.

Kahukiwa, like Dick Frizzell and Nigel Brown, revitalises the expressionist tradition by incorporating the collage techniques of commercial art. Her energetic brushstrokes mimic the lettering on handbills and old-fashioned advertisements, and the scrawled slogans of graffiti. In her pursuit of proactive affirmative allegories promoting brand Maoritanga she doesn't hesitate to appropriate designs taken from royal regalia, flags, heraldry, tapestry or stained glass windows. She also skillfully employs a cinematic technique of close-ups, simple juxtapositions, storyboarding and melodramatic action. The flatness of the photograph is another resource in her repertoire of devices, as evidenced in the Mauri Ora! painting of nineteenth-century Maori women, Nga Whawharua (2001). Kitschy motifs taken from comic books appear elsewhere in the Mauri Ora! selection. The cartoonish contours of Supa Hero (1999) twang with energy and rhythm. If the message- carrying here inclines to the portentous, it remains aspirational and easy-to-read for its intended younger audience. 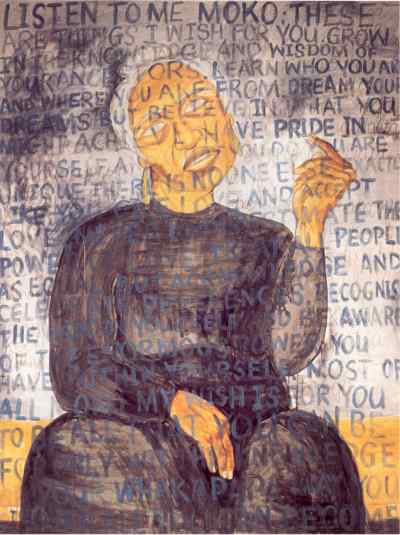 But Kahukiwa's central stylistic influence since the early '80s has been the Maori customary art form of whakairo - carving - which in Maoridom is traditionally the preserve of men. In the mid-twentieth century Pakeha artists like Gordon Walters, Theo Schoon and Eric Lee-Johnson took the iconographic patterns of carving and worked them into their paintings, while in the '60s Maori male painters such as Buck Nin reclaimed these whakairo motifs. Robyn Kahukiwa has led the way for Maori women artists. She has seized on the forms in Maori carving as a graphic talent who has found the true shape for her style.

Invoking genetic memory, she paints the way her ancestors carved, tracing thrilling sinuous curves taken from the ridges, spirals and notches of the poupou - the meeting house panels. Similarly her serpentine figures, resembling the hei-tiki and other deity figures - complete with claw-like fingers, group up to give presence to painting after painting. And above all there is the elongated ovoid head with oval-shaped eyes and mouth to match, counterbalancing the strength of the legs - almost always shown flexing - and the oval belly on which the hands rest. Meantime each line rhymes: the nether curves of buttocks rhyme with the curve of skulls which rhyme with the curves of shoulders. The design is as rhythmic as the stamping of the haka, while nostril holes gape to draw in te ha - the breath of life.

The standard template of the Kahukiwa female face, with its huge lips, round staring eyes and fixed expression, has become a figurehead of Maori art and signals Kahukiwa's central concern which is affirming Maori female experience. In Mauri Ora! her images of young Maori solo mothers struggling with social stigma have a logical connection with images of mareikura - or traditional female supernatural beings. But it is her images of woman giving birth - and specifically of Hinetitama - the Mother of Mankind in Tikanga Maori - giving birth in Nga Tipuna Ki Mua Ko Tatou Kei Muri (1996) - which register as some of the most powerful images in contemporary New Zealand art. Their primal intensity makes them remarkable by any measure, even in the context of world art. In a way they are deeply subversive, certainly of male-privileged image making.

You could say that Kahukiwa's art is a form of biochemical warfare: in thrall to a hormonally-driven gynocentric world view, she relegates males to a secondary role. Women, it's stressed, articulate muscular energy every bit as impressively as males. Kahukiwa questions oppression on every level. Be it that of authoritarian power structures inside Maoridom or without. Much of her riddling imagery requires decoding, requires education in Maoritanga, but her basic concerns - identity and the need to find a place to stand - remain transparent. Her mask-like faces signal her preoccupation with transformations, metamorphosis and disguise, and also of course with standardised representations of female beauty.

In her hands the power of the face becomes fetishistic, totemic, and that entrancing, mesmeric quality she creates is both chthonic and atavistic - that is it is as ancient as humankind itself. The skin tones of Kahukiwa's women often have a yolky organic richness. Positioned against stormy skies, or lava eruptions, or backgrounds resembling puddles of blood, these women evoke fertility goddesses, the eternal feminine. The mask of beauty is a form of transcendence, a way of making the mortal immortal.

A maker of pedagogic monuments, creating sermons in paint, creating symbolic abstractions which celebrate the virtues of tribal collectivism, and working for human dignity and equal rights, Kahukiwa confirms herself as an articulator of a fierce and resonating vision, skillfully affirming things Maori: its language, its prestige and its land - toi te kupu, to te mana, to te whenua.