Do you think we seek in the wrong places for our culture? Colin McCahon(1)

Fifty years after McCahon was wondering about wrong places for the search for that elusive stuff, 'our culture', painter Tom Mutch thinks he may have hit the spot: Mutch has the audacity to title one of his recent paintings In Search of the Kiwi Identity and says that it lies 'on the road to Opito. Here, my mythical Kiwi patrols, waiting to enlighten the deceived. Putting all the pieces together. Creating a new identity'. Is that mythical beast, the Kiwi Identity, indeed alive and kicking on the road to Opito? Can it be that the players in our national pastime of an angst-ridden search for identity have been fossicking in the wrong places? Where is Opito anyway? 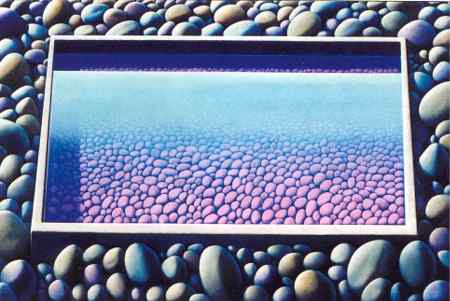 Opito Beach is at the end of a little stretch of violently beautiful coast on the east Coromandel peninsular. It's not a place that comes up readily in conversations about art, but on the rough road to this remote spot, about as far from anywhere to do with the High Art Scene as it is possible to get, you will find Birds Nest Studio. Over the last three summers Tom Mutch and his mentor and friend Michael Smither, 'famous as the painter of rocks from Taranaki who can't pass by a pebble without thinking of God',(2) have exhibited at Birds Nest on Pumpkin Flat Road, Kuaotunu, on the way to Opito - and thousands of viewers have found their way there, some of them wearing damp togs and jandals, holding children by the hand. If it sounds a bit like a flashback to Coromandel hippy days, forget it; the Birds Nest exhibitors are serious about fine art, seeking a vigorous dialogue between themselves and their viewers, deeply engaged in the never-ending story of shaping and shaking up the way we look at ourselves and our island lives. Last summer, Mutch and Smither were joined by two invited artists, Gian McGregor and Nick Dryden, and viewers paid robust prices to take their chosen work home over those dusty roads. 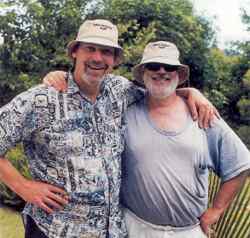 Tom Mutch exhibited The Secret Life of Ideas, four diptychs, each 1200 by 840, that present a richly- coloured, hard-edged visual code to his private mythologising journey. Mutch paints what he is thinking about, giving form and colour to the ideas that he often spells out for the viewer in accompanying text. We see iconography repeated and reformed: an egg, a red hot poker, a violin, a pounamu mere, a lizard / taniwha. And we read about 'the egg as harbinger of new news, where we may lay our hope for the future', 'the lizard wrapping itself round the egg in a protective fashion within the New Zealand landscape' , 'red hot pokers as a shot in the arm on a bleak grey kiwi day'. Mutch's kiwi from In search of a kiwi identity has a beak morphing into something resembling a trumpet - can it be it is the herald of good news? - while it has grown new legs, the legs of 'new immigrants, expanding our cultural orbits'.

Smither paints what he sees, imbuing the ordinary with a sense of the sacred. The coffee pot he exhibited, with discarded peels of orange quarters played off against the pot's gleaming smoothness, elevated the study in the blueness of the pot to the realm of Renaissance Madonnas. His large Kaweroa Paddling Pool, which has been bought for a Sydney boutique hotel, bathes every stone in a heavenly, opalescent light. 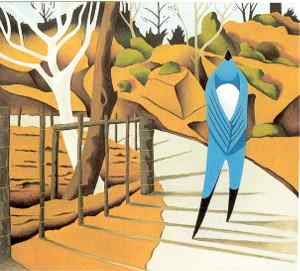 Gian McGregor exhibited her 'ecomage' photographs, (a word coined to describe the use of local sand, clay, shells and processes of the coastal environment; 'eco': ecology; 'mage' montage). Nick Dryden, a sculptor from Wellington, exhibited 10 Urban Madonnas, pieces bringing a Pacific perspective to the role of Madonna in the contemporary world. They were shown in a circle in the sculpture garden, set in wooden frames based on traditional shrines. 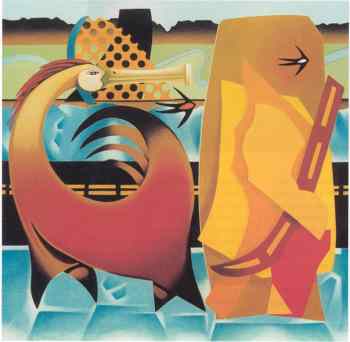 Tom Mutch is the resident artist of Birds Nest Studio. He and his wife, Raywin Lim, set up home and studio at Kuaotunu a decade ago, after 20 years living in Taranaki. When Michael Smither went to visit, he was smitten by the coast at Otama, 20 minutes over the hill closer to Opito and, in the mid- '90s built a home and studio there - 'to realize my dream of moving north and living by clear water.' In 1997 Smither was joined by Gian McGregor, a New Zealander who had lived in London for 18 years.

Mutch and Smither have been 'putting all the pieces together', locked into a rambunctious conversation about art, for more than 30 years. Not only about painting, colour, brush-strokes, technique, ideas, but life itself: women, sex, drugs, the rocks and rolls of relationships, kids, politics, love, saving the environment, food, health, friendship, to say nothing of jealousies, ambition, despair, depression, poverty, the conversations have been loud and vigorous and long. Through nearly all of them, listening, observing, and putting together pieces of her own has been Raywin Lim, Tom Mutch's wife of 20 years. Smither's two wives and loved women have been passing guests at the feast of words, paint and ideas. 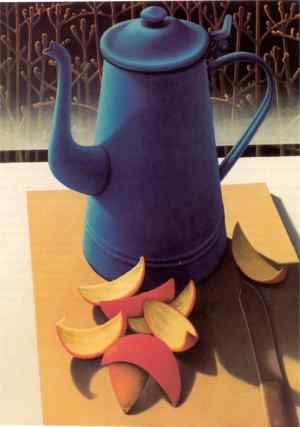 It isn't new for Smither, Mutch and Lim to work together to expand the cause of art. In the 1970s they were key players in TACO, the Taranaki Artists' Cooperative and then the Huatoki Gallery in New Plymouth, which promoted a group of artists, sharing space. ' Actions grow out of necessity,' says Lim. 'We needed to eat. I've made calico bags and carted prints around making cold calls from the Yellow Pages. It was successful in the '80s. But now I don't want to scatter my energy into too many artists. The workload for each one is too great. I'm archiving, creating and publishing catalogues, postcards to the mailing list, invitations - there are a lot of unsung songs with the stuff I do for my artists.

'Over the years of working with Michael and Tom I've grown to understand the passion of an artist's calling. It isn't about the manufacturing of an object for your wall, nor how well it is received by the art hierarchy, although these are often the measures of judgement. What is of utmost importance is their need to create. This drive seems to permeate their very souls. I look after the artists, I listen, I act on their ideas. The focussed energy is paying off.' 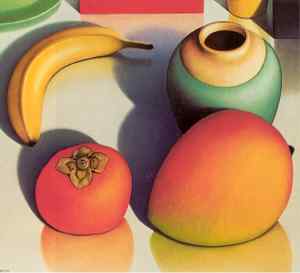 Birds Nest's first marketing ploy was Outside the Box, a construct to announce the 2001 summer exhibition and to entice people to write in for a cut- out-and-keep box printed with Mutch and Smither's work to start a mailing list. It was as much a statement of stance as a marketing ploy. Both Smither and Mutch have been outside the square, never the darlings of the art circles of the urban centres for all their working lives. It is a place, a position they are coming to relish. Witness the anarchic glee in the yobo photographs that have been used in their recent summer promotional material - a couple of blokes at the beach with beer guts, sunhats and shades; artists as fishermen, proudly holding up giant snapper for a postcard that says 'Great fishing in these (p)arts!'

No visual clues here that these are serious artists at work. They look like a couple of yahoo larrikins; you can almost hear the raucous belly laughs; sense the delight in being out on the edge on the way to Opito, away from the chilly world of dealer galleries and sophisticated viewers.

'If we are being yahoos,' says Smither 'so be it. I've found Tom to be one of the most talented entrepreneurs I've ever met. Maybe there's a bit of snook cocking going on, but it's also about different and innovative stuff. At my stage as an established artist I can afford to go out on a limb with Tom's ideas, sometimes with a fair bit of trepidation. My input is to see it all stays kosher, is well done in terms of what we are doing as artists. I've never belonged to anyone dealer and it's been my method to be friends with all my dealers first of all, and hopefully for them to be friends with each other.

'There is some tension around Raywin acting as my agent, in that she is on the spot and gets a first-hand view of what I do. However, my arrangement with her is that she is guaranteed four works to sell a year in exchange for producing my catalogue and keeping it up to date with my other dealers. This works pretty well or as well as the dealers want it to. The catalogue puts me in control of where my work is at any time It and the communication between dealers becomes crucial to their obtaining work that they think they can sell. 'The Birds Nest shows, with the relaxed atmosphere of summer time, have definitely led to a new audience for my work.'