Commentators on Sylvia Siddell's work sometimes seem to have been more fascinated by the woman than by the paintings and drawings. This is, I suspect, at least partly because in the articulate and engaging conversation she offers about her work the two tend to be seamlessly interwoven. It may also be because so many women have found elements of their lives in her paintings expressed in ways that delight and satisfy them. Nevertheless it is possible that in serving for many as a recorder, across the grain, of 'a woman's view' she has not yet been sufficiently recognised for the less gender-specific aspects of her vision.

Siddell's most recent paintings reveal a clear understanding that both visual and written texts are available for multiple readings. We are offered both an insight into her world and space to read ourselves into the paintings-to bring to them our own ideas, experiences, and expectations. And, in so doing, to create our own readings of them.

For many this is a postmodern position - the labile, shifting nature of knowledge, the intense importance of positionality, epistemological multiplicity. But I suspect that for Siddell it is basically common sense - the outcome of years of experience as a painter. She knows, because people tell her so, that particular paintings have, for them, resonance and meanings far from what was in her mind at the time of creation. But this is not to say that they were far from her creative intention. She makes paintings that we can put ourselves into; through which we may experience relationships with the objects - whether or not they are the relationships she had in mind. 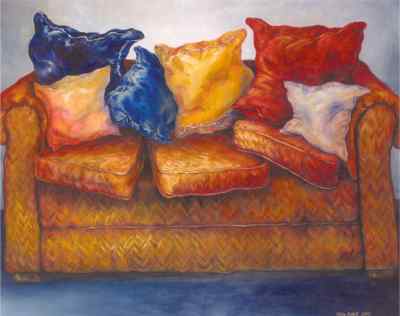 Objects that most of us believe to be inanimate are for her energetically moving, growing, vibrant and alive. Her (painted) readers may radiate stillness and tranquility but they engage with books overflowing with life. These books are ones you read and dropped into the warm water while drinking wine in the bath. Their pages have dried wanton and willful, no longer willing to lie flat between their covers. Sometimes the sheer energy may be threatening - we don't all want our tins and tin openers full of incipient and independent action.

Sylvia Siddell talks of the 'uneasy truce' she perceives in the intimate relationships we form 'with these potentially dangerous possessions which expend their ferocious energy in our service'. She revels in the paradox that in contemporary urban environments people are mentally active but that most physical toil is now performed by 'mechanical slaves' that do our bidding up to a point but are never fully controlled, totally subservient. Where ownership once derived from the making of useful objects with our own hands - now we buy from an anonymous production line. These objects are not whanau or familiar friends - they are strangers and we are compelled to regard them with suspicion, or at least uncertainty. 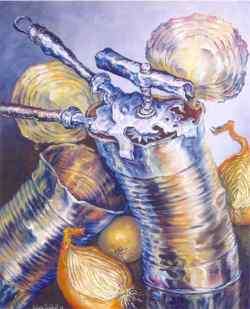 Drawing on Barry Unsworth's notion of the violence of the eyes which can render any object dangerous and detached (1) she both makes strange the objects around her and searches for traces left on them by past makers and users. In the modem world we may begin with machine-made articles instead of things crafted by artisans but still, as we use them, we leave our marks in dents, scratches, worn places.

Robert Hughes, describing Lucien Freud as 'the greatest realist painter in the world', writes of his 'relentless scrutiny of physical fact, so that a chin or an elbow acquires the same intensity, as painting, as a . breast or a pubic mound'.(2) It is this intensity of vision translated into the way it is painted that makes Freud a very favourite painter for Siddell. She says it is as if 'every tiny bit is seen for the very first time', whether it be a human body, where the lumpy paint of the flesh is like meat, or an armchair or settee. Yet another point of connection seems to me to be the frequently remarked on power of Freud's work 'to remove the veil of convention from our view of any individual, revealing the truths, uncomfortable and profound, beneath'.(3) In Siddell's case though, it is objects rather than individuals whose uncomfortable truths are revealed.

The process of learning from looking at the work of others and 'reflecting, seeing, being awake, alive to what is there' has been a lifelong preoccupation. More recently it has taken the form of travel to the United States and to Europe to spend weeks, and even months, looking at art. It is this even more than the formal classes and workshops she has attended that have shaped how Siddell sees the world and how she strives to capture and represent it though paint. Recently through an invitation to contribute to an international Cybernet Exhibition curated in Korea, some of her paintings have been displayed to a world wide audience. She comments on the strangeness of receiving emails from across the world-including the one from France proclaiming that 'my eyes have been to paradise'.

The particular sensibility reflected in her shows over the past ten years has shifted with changes in her own life and in the life of her family. Some of her most reproduced earlier paintings are about the secret life of objects, but then there came a phase--particularly in A Rich Life (1998) and Fragments from a Life (2000)- of introspection, poignant awareness of the small pleasures, the melancholy, and the fragility of life. Here are many of the hidden stories and meanings noted in John Daly-Peoples' review of A Rich Life.(4)

Nevertheless, autobiography is never independent of history. In painting her own life Sylvia Siddell is also saying things about the nature of the lives of everyone else and in Readings the mood shifts quite noticeably and in several ways. The introspection, though still present, is that of others. A man, watched by a pineapple, reads its melancholy history. In Sunday a woman sits with hands in lap, book neglected, engaging in what has been for most people thoughout history the unobtainable luxury of doing absolutely nothing. (Siddell is struck by the realisation that for most of the world physical survival still rests on backbreaking and interminable physical effort.) 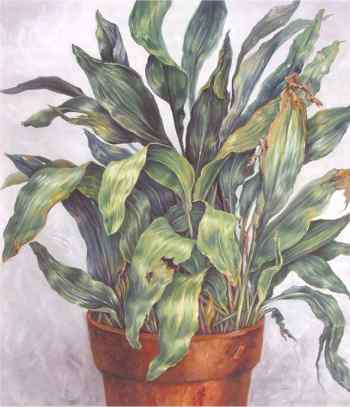 But there are also paintings where objects again take on some of the dynamic intensity of the well- known earlier domestic scenes. A can opener and cans share a vibrating energy that edges towards disintegration - will the molecules hold together or are they about to dematerialise? The couch is lusciously comfortable in colour and texture but it is also turbulently rejecting any body that might think to rest there. This is the revolt of an object whose destiny is to receive the human bottom, knows it, but refuses to submit. And so it becomes another kind of object, glorious to look at, fit for a different use. This speaks to me about the possibility of things being otherwise, the desirability of resistance. The aspidistra, that most passive and waxen of Victorian icons, is (almost) caught in that strange and furtive leaf movement that plants contrive, secretly, under our noses.

Underlying these carefully crafted oil paintings, whose lush and sensuous effect comes from the building up of many layers of paint, is the virtuoso drawing of Siddell's earlier work. Often, layers of underpainting glow through to heighten the depth and richness of colour. Just as the mood and content of her paintings continues to change and develop, her technique too is constantly reinvented as she experiments with paint, looking for new possibilities, reaching toward what might yet be possible.

In many of the articles published about Siddell, the writer seems almost to be captured by the sociological dimensions of her life and work. While she was having a personal experience with the strangeness of objects, others were turning her into a symbol of the housewife confined. Certainly many of the paintings - and the earlier drawings - can be read this way; but that is not the only way they can be read. Furniture and kitchen objects may be less conventional objects than oranges for still life painting but they do not necessarily signal 'women only'. Recognition of the curious and secret lives of objects is not necessarily either the province or the outcome of domestic life. Ultimately it is as a strong, perceptive, individualistic painter rather than some kind of 'Everywoman' for a particular generation of New Zealand women that Sylvia Siddell should be celebrated.