One of the most potent pieces of self advertisement used by the Red Mole theatre troupe in its three-and-a-half years of activity throughout New Zealand was: 'Some day all theatre will be like this'. It probably would have been truer to claim that, once, all theatre was like a Red Mole performance - or at least shared its eclectic origins and social dynamic.

The trundling wagons of the Medieval Mystery Plays, with their dramatized Gospel-message, have been echoed in the Street Theatre shows through which Red Mole entertained and instructed: just as the improvised farce and local social comedy of the Commedia dell'Arte have been paralleled by the repeated characters in their Pakuranga or Karori household sketches. 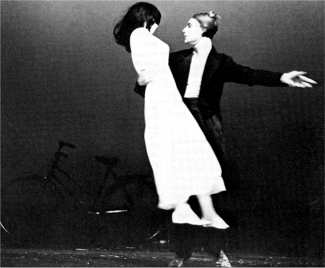 Surrealist sketch from Ghost Rite:
Ian Prior with dress-maker's dummy

The circus acts of antiquity - tumbling, clowning - as well as musical support from fairground and balladry, have found their place in Red Mole's shows; as have the masks and white-face of ancient drama. The self-contained dance numbers, and variety acts such as fire eating, have been borrowed from the more modern world of cabaret (development of the cabaret style can be ascribed in part to the premises the group worked in through its early days).

What has distinguished the whole, and prevented each performance from being just a conglomerate variety show, has been the unifying philosophy behind the creation: represented by the work of the tightly-knit core of Alan Brunton, Sally Rodwell, Jan Preston, and later Deborah Hunt, all of whom have contributed and performed original material from the start. It is this originality, this unwillingness to rely on received theatrical words or frameworks, combined with a happiness to embrace the first premises of popular theatre and the evolution of a recognisable local style stemming from the regular company, which has resulted in the unique contribution of Red Mole Enterprises to the New Zealand theatre scene. 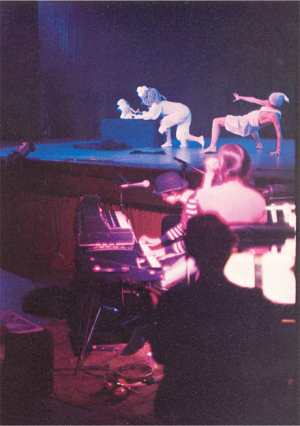 Although Red Mole's philosophy has never been explicitly stated, a key to understanding the themes running through the shows and underlying the existence of the troupe seems to me to be the apparent Dadaist influence. The extensive programme-note for Ghost Rite (the only such programme produced in the nine shows presented in Auckland) is supported by quotes from the Dadaist principals, poets Hugo Ball and Tristan Tzara. The quote from Ball is ironic enough: 'Who knows now what is good and what is bad? Standardization is the end of the world. Somewhere, perhaps, there is a little island in the South Pacific that is still untouched, that has not yet been invaded with our anxiety. How long could that last? Then that too would be a thing of the past.' 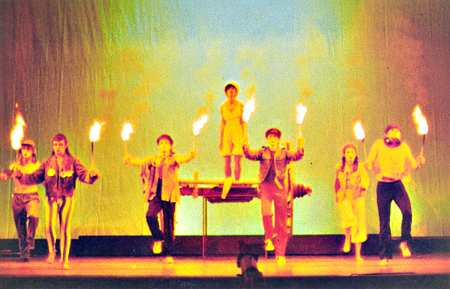 The company assembled for the finale with the Liberty bus, used in both Ghost Rite and Goin' to Djibouti

This was written in 1913. If it was quoted by Red Mole to suggest some of their own feelings about New Zealand, the following quote from Ball's Die Flucht aus der Zeit (Flight from the Times) suggests to me something of the flavour of the company's shows: 'What we are celebrating is at once a buffoonery and a requiem mass... the bankruptcy of ideas having destroyed the concept of humanity to its very innermost strata, the instincts and hereditary backgrounds are now emerging pathologically. Since no art, politics or religious faith seems adequate to dam this torrent, there remains only the blague (joke) and the bleeding pose.'

Ball and the Dadaists flourished amid the inhumanity and political chaos of the decade in which World War I occurred: but the Red Mole company seems to have found enough disillusionment with our own society to supply the framework of their dramatic statement. The black flag of anarchy that flies over their shows embraces an unstrained conjunction of savage satire - whether of Christianity/the present politicians, the police or communes/ Surrealistic imagery (including literal references to painting styles) - and an insistent concern for freedom of expression, with its corollary, the present socially-destructive indifference to individuality. A Red Mole show could be neatly summed up by quoting Tzara's description in his Dada Diary of the first Dada night at the literary Café Voltaire in Zurich, July 14, 1916: 'For the first time anywhere. Waag Hall. 1st Dada night. (Music, dances, theories, manifestos, poems, paintings, costumes, masks). In the presence of a compact crowd, Tzara demonstrates, we demand, we demand the right to piss in different colours. . . ' 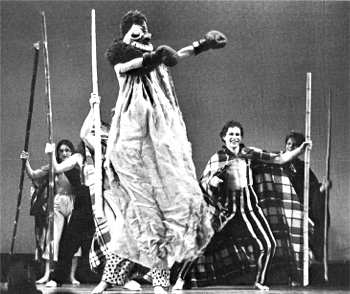 The Bear: mythological character wearing one of the many masks used by Red Mole; visible in the background left to right, Jean MacAllister, Martin Edmond and Alan Brunton

Nor do I think this invalidates in any way the official/unofficial Red Mole view of its own beginnings and raison d'être expressed in the Ghost Rite programme: 'It was while on this tour [with Split Enz in January 1977] that Red Mole [at that time Sally Roddell, Alan Brunton, Deborah Hunt and Jan Preston] discussed their search for a genuinely local entertainment to bring together the variety theatre and the existence they were watching happen around them in Veint's Tearooms above the main road of Gore. Out of this discussion came Cabaret Capital Strut, a satirical investigation of the national psyche. The cabaret drew on all the experiences of theatre to present through mime, dance, spectacle and farce an exact measure of our own country. Stated Alan Brunton: "Our shows are as totally New Zealand as a can of Watties baked beans - we are homegrown theatre"'.

From its origins in puppetry (the White Rabbit Puppet Theatre became extended to Red Mole Enterprises) the troupe built up to six popular shows in seven months at Carmen's Balcony in Wellington. It arrived in Auckland with a modified Cabaret Capital Strut at the Ace of Clubs. 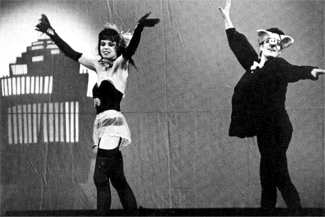 Against the background of the Beehive the Pig character, played by Deborah Hunt, pursues the girl, played by Sally Rodwell

A more narrative show, Slaughter on Cockroach Avenue, followed a favourite of the troupe although the slow-moving story, based on a Raymond Chandler style detective, interspersed with cabaret spots, played to small houses. Pacific Nights and Our World retained the cabaret format, but were hampered by unsuitable venues. In between, the nativity play Towards Bethlehem at the Island of Real Cafe for Christmas 1977 was a much-praised gem.

Then came the two blockbusters: Ghost Rite, a poetic and imaginative sweep through history from the days of the hunters and planters to the fire-escorted freedom movements of the twentieth century (a 'liberty bus' was both sung and wheeled around the stage); and Goin' to Djibouti, the troupe's farewell, in which the liberty bus took them to Europe. Both shows were toured. 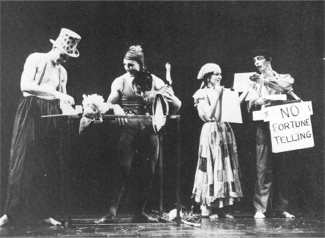 If there has been a major achievement in the development of the Red Mole company it is probably the integration of a vitally fresh rock music into the dramatic structure of a show that is neither play nor cabaret, musical nor concert. Jan Preston's dozens of original compositions were conceived simultaneously with the shows, and are as colourful and versatile as the stage action. Whether it was a straight lyrics-rhythm combination for a solo singer or a complex piece for combined classical and rock players, her music has been an indivisible part of the Red Mole style. Its dramatic validity was proved by the way the musicians formed separately into a group called Red Alert after the actors had left for Europe, and presented a music-theatre evening in which sound and light conveyed the same full drama.

A major area which the company has yet to explore is that of being able to involve or provoke an audience more emotionally. Ghost Rite and Goin' to Djibouti were visually exciting shows replete with lively mobile tableaux: however, both could be watched with complete detachment. The energy the actors put into their work is obvious, but it has been self-generating and usually has had no reference to that second party to any theatrical agreement - the audience. This springs partly from the venues (the same problems do not occur in Street Theatre presentations, nor in the children's puppet shows). 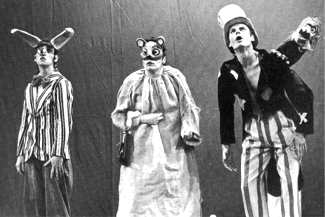 About ten of the troupe will be overseas for a year or more, including those stalwarts of the Auckland season, Martin Edmond, John Davies and Ian Prior. Then, actors and musicians say they expect to return to New Zealand with a fresh show already in planning, and their 'Overseas Experience' to the fore. It will be an occasion to be hoped for (nothing is absolutely certain) and to be experienced with interest.