Problems for the Performing arts

It seems to me that there is much cause for concern over the status of the performing arts in New Zealand. How often does a promising young soloist leave for greener pastures to further his or her career and gain necessary experience? It's almost proverbial as the only thing to do. But should it need to be so?

Again, to view the position of the performer in another light, why should it be that a performer of international repute must be told that he can't make a living in New Zealand?

New Zealand seems on the surface then, to be peculiarly fecund in producing and nurturing artists of quality but it almost appears that there is a certain sterility in audience production. This can hardly be true. To produce one performer necessarily means a large number of amateurs; and a lesser number of nearly-performers are being produced by a worthy number of teachers, and all these people are potential audience, not to mention the number of non-performers who become audience as an indirect result of these efforts.

If, then, we are producing artists and audience, we must look for some other reason why the audience and the artist are not coming together as one would expect.

The problem somehow seems to centre round the actual bringing together of artist and audience. From the artists' point of view, the big venues are limited to the main centres - about five, perhaps ten if the performer is happy to play for 300 as liona Boyd did recently at Tauranga and Napier. From the audience point of view, there are some who would have to brave snowstorm and blizzard (an inexact quote from a Community Arts Councillor down country) to attend a good concert.

Perhaps it is in fact because the venues themselves are not entirely suitable for the soloist, the chamber ensemble, or the delicate instrument that the problem is so great. Except for some of the older halls, the problem can hardly be the acoustics or the facilities on either side of the proscenium. Hall hire and publicity costs which must be borne by the artist in advance must have a large influence on the artist's choice of venue. By using large halls alone, the artist virtually condemns himself to performing only five or ten times a year, and never providing himself with a year's performing experience or a year's income.

This leaves what must be untapped potential audience. Is it possible to take the performer to the audience instead of vice-versa? The large concert hall is, after all, a late nineteenth century phenomenon, the original idea of a 'concert' being a salon or chamber-scaled entertainment. The salon concert is not, then, a new idea, but an old one which the New Zealand audience could well use to be entertained in an informal and relaxed atmosphere.

The 'house concert' as it is called here, has been growing in popularity over the last two years and would seem to be fulfilling the need of both audience and performer in many respects. The volume of work in arranging a tour is now such that an agency has been formed to handle the booking arrangement. Those who would like to book a date for a concert, or receive information about the artists available should contact the agency.
JACQUELINE A. BROCKING

A Question of Influence

It is of course pleasant to read in the review of 'The Group' in Art New Zealand No.8 that my lino-cuts 'were quite remarkable pieces'. However it does nark me a bit to read that they are 'dependent to some extent upon Cleavin's latest Jeanette etchings'. Not having seen these won't it be interesting when I first see what I depended upon!
OLIVIA SPENCER-BOWER 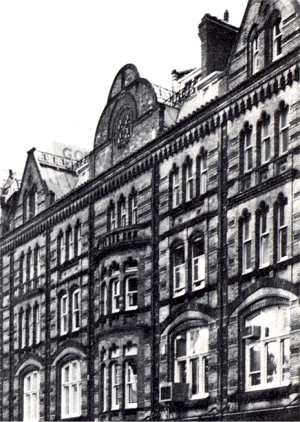 The Destruction of Victoria Arcade

Was it necessary to pull Victoria Arcade down? We no longer believe in Neo-Gothic, but have developed a feeling for its work, compounded of historical insight, a bit of sentiment, and in some cases a genuine appreciation of an honest endeavour to create beauty. It was grotty all right: mostly through neglect and thoughtless accretions. But it had fine brickwork, and it has above all very fine 'scale', that elusive but essential element, like a rare vitamin, the lack of which will show up in no uncertain terms. Does its proposed successor have any of this desirable vitamin? Hard to tell from a few 'artist's impressions', that proverbial synonym for arty misrepresentation: though from what one does see, it is highly unlikely that it has any more than any other desirable quality. That such a design nonentity should be accepted by the owners of one of the finest buildings in Queen Street is highly disquieting: especially in an institution in which the Government has the casting vote!

It is an eternal shame that the Victoria Arcade had to follow the City Club, the Regent Theatre and so on. Save our nostalgias, Auckland City Council! They are but signs of our sense of continuity. Without that there is no civic pride; and without civic pride there is no new heart for the City, Mall or no Mall. And if you want to stop vehicles taking over the City, why not ban the bulldozer?
DR. I.V. PORSOLT