Consisting of more than twenty items, Marte Szirmay's exhibition of sculptures was a little uneven: but this unevenness was conceptual rather than technical. Despite such deviations in quality, the most successful pieces continue to confirm her position as one of New Zealand's leading sculptors.

The delicate balance between abstract qualities of a somewhat geometric disposition and qualities derived from an organic origin, a factor evident in much of her previous sculpture, is, in the recent works, further developed. It is a development that could be seen in a twofold way as dictated by the two media used. The aluminium sheet metal works, all produced in 1977, are inclined to emphasize regulated surfaces while the organic aspect is dominant in the cast marble pieces - a new technique for the sculptress in which particles of ground marble are actually cast with resin as the fluid bonding agent. 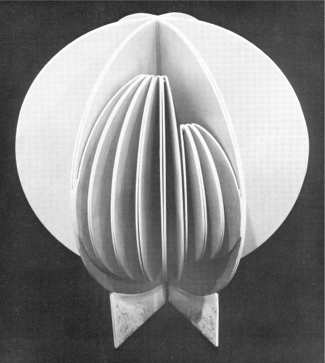 The sheet metal works are more easily related to Marte Szirmay's earlier sculptures, as they echo several basic shape motifs already distinctive to her work. These motifs rely on the formal utilization of certain units, particularly the semi-circular and curved segments in combination with the way the sheet metal is folded and the use made of such segments to create strong repetitive-like patterns. Although used extensively, these motifs, especially the semi-disc shape, are considerably varied in shape and purpose when applied to individual pieces.

The sheet metal works attain greatest satisfaction when a sense of organic unfolding combines with the geometric surfaces to impart a suggestion of internal movement that becomes greater than the formal parts from which a single work is constructed. Success and partial failure in these works resides more in this elusive impression of organic impregnation than on the mechanical ordering of the formal elements: that is, if such factors can truly be separated. This is why the least satisfactory piece over-formalized the repetitive, flat, semi-circular disc and so lacks any inner sense of organic involvement as well as attracting the suggestive tinge of similar overlapping forms as developed by Kasper Lenk in the nineteen-sixties. The best works avoid such rigidity, so that the dynamic arrangement of the contributing metal parts captures something akin to the illusion of unfolding natural images such as seedpods or the petals of a flower in the process of opening. In particular the stress established between the various parts in one work (catalogued as No 9) is so finely maintained as to give the illusion of the elements pulling apart while retaining a firm impression of self-contained unity.

Certain formal elements present in the sheet metal works have been carried over into the cast marble items: but the differences imposed by the two media are immediately apparent.

What distinguishes the best of the cast marble pieces is the natural transition from the formal relationship of curves and planes to shapes particularly suggestive of the world of sea-shells and small marine creatures. This impression is strengthened by the fact that several of the larger pieces are half-submerged in water as they nestle in perspex containers. As in the past, the element of reflected surfaces is introduced. The dull but translucent marble above the water is made to contrast the mirror-like reflections of the sculpture as seen through the water and retaining perspex. Where in the past it was the viewer and his surroundings that were reflected, in these pieces it is the sculpture that is self-reflecting with its own setting.

A selection of about a dozen smaller cast marble pieces included some that were well-conceived as miniature sculptures, while others seemed somewhat undeveloped in both form and scale. The better ones succeeded by reason of their crisper shapes and greater simplicity.