The main attraction of this book is the description, largely pictorial, of a number of examples of 'Palladian' architecture in Britain, Ireland and North America, many of which are only rarely published in the literature, and hardly ever in this 'international' context. And yet, when all is said and done (or written and photographed), a comprehensive image of Palladianism fails to emerge.

It may be a question of definition. No-one would seriously suggest that Palladianism is the imitation of the architecture of Palladio. Palladio was a great and original genius, who wrote a famous book about the exact rules of 'good' proportion: but whose originality pushed him, in his design, far beyond the mere following of his own precepts - and not infrequently to defy them. 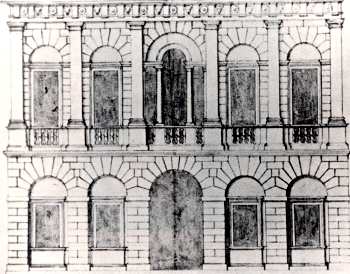 An elevation drawn by Palladio. Purchased by Lord Burlington, the drawing forms the basis of his design for General Wade's house in Piccadilly

Palladio's followers in British lands (and North America was British still during the heyday of Palladianism) are more noted for the servility of their Palladian cult than for their ability to emulate any original approach. And in-as-much as they (some of them) were creative and original architects, they had given evidence of it precisely by their departures from the canonical faith. So, for instance, William Kent's distinctly Cubist sense of form, which foreshadows Ledoux of France, comes from a very English tradition embodied in Nicholas Hawkesmore, an architect usually discussed as a follower of Wren, and anathema to the Neo-Paliadian establishment of the Earl of Burlington. And Inigo Jones . . . progenitor of the British branch of the Palladian family? We have to amplify somewhat things said in an earlier issue of this magazine in connection with a recent publication of Jones' theatrical works.

Alone amongst the important Italian Renaissance architectural authors (all and sundry practising architects) Palladio refrained from discussing at any length questions of urban design. Perhaps he thought that its rules and principles had been thrashed out well enough. Perhaps he accepted with wise resignation the hopelessness of principle-minded reforms in the winding canal-scape of Venice. Perhaps he was only too glad to have such ease and freedom of action in placing his Villas in the Veneto. So when Inigo Jones was called upon to create a 'piazza' in London's developing West End, he had to go elsewhere for guidance.

He found it, not in Italy, but in the old Northern European town square recently nationalised by the French. So Jones' Covent Garden became a non-Palladian starting point for a very English town design tradition, which was only superficially connected with Neo-Palladian practices, right up to its brilliant though abortive climax in the work of John Wood the Younger at Bath.

It seems then that the chief merit of Palladian ism was, in terms of history, that it increasingly provoked its followers of real ability to kick against the traces. There was Jones himself. There was Wren and his school - non-Palladian according to the canon, but certainly not blind to the real Palladio and the real Jones. There was mild, rotund James Gibb, and there was his later soul-mate William Chambers. There were harsh, angular Hawkesmore and his later soul-mate Kent. And there was Robert Adams - demonstrably more Palladian in his concepts that all those ineffable, only occasionally elegant Vardys and Taylors and Hollands.

The authors of this book call Adam's hold on the imagination of posterity a dead hand. Having only recently been in Edinburgh I feel like contradicting violently. But, on reflection, it appears as another, and not the least merit of this book to make such statements, which provoke contradictions, but also force the reader to rethink the problem.