Charles Frederick Goldie occupies a place as a great painter in the popular imagination of New Zealanders. This seems due partly to his subject-matter and partly to the virtuoso manner of his painting. Most of his works consist of the very literal depiction of elderly Maoris, tailored exactly to the requirements of a sentimental recent past, and given such indicative titles as Noble Relic of a Noble Race, The memory of what has been and never more will be, and In Dreamland, Maoriland. His place as an important painter is hardly tenable when one considers objectively the nature of his actual aesthetic achievement.

The conservatism of Goldie's whole approach becomes apparent when one looks through Alister Taylor's fascinating book C.F. Goldie: His Life & Painting. A talented beginner, Goldie won a prize at Auckland Grammar School for his efforts in 'Shaded Study from the Round', and studied part-time under Louis John Steele and Robert Atkinson. The indefatigable Sir George Grey, after inspecting Goldie's work, advised his father 'to allow his son to follow his bent as an artist, instead of training him for commercial life'. He chose to go to the Academie Julian in Paris. A.H. O'Keefe and Sydney Thompson went there too, but with a very different outcome. Goldie took to the place like a duck to water. He made drawings from casts of the Venus de Milo and one of Michelangelo's Slaves, went on to make studies from the live model, and began to collect a number of medals and prizes. 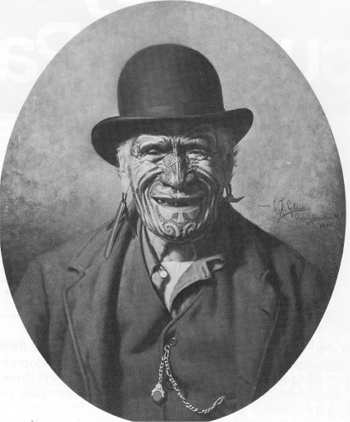 In Paris in 1894 Goldie was on the side of the traditionalists in the battle to keep the Impressionists out of the galleries (his master was Bouguereau, one of the most academic and sentimental popular painters of the period). He copied paintings at the Louvre and Luxembourg galleries in Paris, and many other great European galleries. Later he studied anatomy under Professor Duval at the Beaux Arts and portraiture under Sir James Guthrie in London.

Goldie returned to New Zealand in 1898. In the same year he collaborated with his old teacher Steele on the large canvas The Arrival of the Maoris in New Zealand, which was based on Gericault's Raft of the Medusa. He rapidly became an established artist here, exhibiting at the Auckland Society of Arts, the Canterbury Society of Arts and the New Zealand Academy of Fine Arts. He soon settled into his characteristic subject-matter and there is a certain monotony about the procession of busts and heads which from that time forward make up almost his entire oeuvre (the fact was the subject of some criticism at the time).

Goldie's practice was to paint on a well-dried thick white-lead ground, which he covered with a scumble of raw-umber, applied with a round brush in a distinctive pattern - alternating obliquely directed brush-strokes. You can see this pattern showing through to the finishing stages of the work, which were without visible brushstrokes. Consideration of the famous 'technique' brings up the question of the role that photography played in the production of his works. This has never been satisfactorily resolved (though a note in this book on his technique asserts that examination of the paintings has revealed no evidence of his using photo-sensitised canvases). It does seem, however, that Goldie's works were largely painted from photographs (which accounts for the minuteness of observation).

The newspaper notices of his exhibitions were mostly obsequious: but, as we can see in one of the catalogue notes in the book, Goldie's literalism was being criticised as far back as 1910 by a writer in the Triad in what seems a definitive statement on his purely aesthetic status: 'Mr Goldie might be described as a "photo realist". His artistic ideal seems to be the coloured photograph. Art is more than the mere transcription from nature; otherwise, why buy pictures at all, when we may so easily view the superior work of nature. True it is that Mr Goldie's transcriptions are made with wonderful skill, and look very "real"; but they are none the less inartistic for that.'

All these things said, Goldie remains a figure to be reckoned with. His works have value, even if only for their minute, accurate record of unique personalities from the past - a past that is both Maori and European. Alister Taylor's book has 'done' Goldie as well as he possibly could be done. There had been for years copyright problems over the reproduction of the works: but the death of his widow in Australia a couple of years ago changed the picture. This book now reproduces forty-one works in accurate colour; and makes an excellent attempt at an illustrated catalogue raisonné covering Goldie's working career from c1890 to his last portrait painted in the early 1940s. There is a lively and readable biography, well-illustrated with old photographs, a short essay by Michael King, The Maori & C.F. Goldie, a run-down of thirteen of Goldie's favourite sitters, additional catalogues of undated paintings and paintings of doubtful origin, and an ample list of reference sources.

The book is handsomely produced. Its design, appropriately, brings to mind some of the grandiose art productions of a past era. Of interest to bibliophiles is an informative note on type, paper, binding and so on, placed, unconventionally, not on the verso of the title-page but on the last verso page in the book.