People first started to become aware of Philip Clairmont around the early 'seventies. He was associated in one's mind with a group of Christchurch painters of similar age, such as Nisbet-Smith, Trusttum and Fomison, who studied at the Ilam School of Art in the 'sixties and who have each subsequently developed in their own individual ways. Clairmont has now been exhibiting for over five years (he has had about six one-man shows since 1969 and has exhibited in a number of group shows), long enough for us to form some idea of the physiognomy of his art - though it should be remembered that Clairmont is still young as a painter, and it is really remarkable what he has been able to achieve in a comparatively short time. In a brief introductory article it is only possible to touch on a few points.

One could say that Clairmont's painting is of a visionary nature: but this is only to say the kind of painter he is - not to make any glib comparisons. He has obvious affinities with movements of the early century such as Expressionism, that sought to get behind the surface appearance of things to an inner, more essential reality. Terms like Expressionism however, are not of much use when it comes to discussing an individual artist. I believe, at any rate, that there is a kind of painter who fits uncomfortably into traditional categories, who is sui generis and who demands to be appreciated for qualities peculiar to himself. This category includes some of the greatest. Van Gogh was such a painter; so, in earlier periods, were Blake and El Greco. Although they often seem anachronistic in their time, these artists give unfathomable fuel to the eternal romantic rebellion against' reason', against abstract science, against academicism of all kinds. They need to be taken very seriously indeed.

In our narrower environment we have had few painters 'of this kind'. There are expressionist tendencies in McCahon's earlier paintings: but from the 'fifties at least he can be seen seeking more classical orders of symmetry and repose: the subjective intensity is hard to sustain, and it may not even be desirable to do so (nevertheless it always re-emerges). The appearance of Clairmont in what almost amounts to another era is, to my way of thinking, the most interesting recent development in New Zealand painting. As opposed to the large, slow, noble earth movements on which McCahon meditates, Clairmont's creative imagination is pricked into action by a fire in a grate, a wash-basin, a trefoil mirror, a bed, a wardrobe. The 'box' - a symbol of confinement - bursts apart and everything becomes transformed. It is an alchemical process in which it is hard to tell whether the transmutation is taking part in the outside world or in the artist's unconscious self. In Clairmont's self-portraits (particularly the early ones - for example Twentieth Century Head) the disintegrated head of the artist may become the whole painting, and a metaphysic of the inner having become the outer be conveyed (this is also seen in the Self Portrait reproduced below, where the collage method exhibits literally the process of disintegration and reassemblage). Form, after all, is seen to be really a dynamic and a becoming, and the artist can choose to exhibit this truth to us in the most striking way. The fact that Clairmont views this disintegration as the prelude to a further becoming is suggested by the following quotation from Andre' Malraux in the catalogue to his Wardrobes exhibition:

" . . . However complex, however lawless an art may claim to be - even the art of a Van Gogh or a Rimbaud - it stands for unity as against the chaos of appearances and when time has passed and it has borne fruit, this becomes apparent." 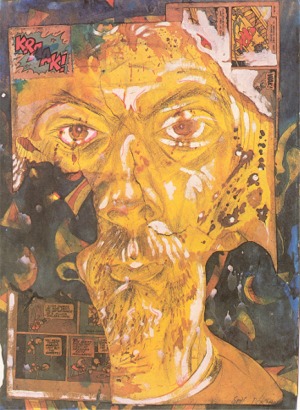 In the small, shaped canvas 'I've got silence on my radio, let the air waves flow', with its masterly interplay of warm and cool pinks and yellows, the 'head' has become a radio receiver, and its thought-like resonances flow, made visible in sheaves of colour.

It is, in fact, in the way he handles colour that Clairmont distinguishes himself from the other 'Christchurch' painters. Colour has been from the beginning, of course, of great importance in Philip Trusttum's work, and his 'drawing in colour' has obvious affinities with Van Gogh. Fomison stays with the resources of chiaroscuro, like the earlier Odilon Redon (which is not to say that, like Redon, he might not break through into colour one day); and Nisbet-Smith's colour, with its nacrous fleshy quality, is nearer to being naturalistic than symbolic (although, naturally, it works in more than one dimension).

Clairmont's colour has a clean elemental quality. Scarcely ever murky, it evokes apparitions of high energy - such as variously-coloured flames, sunlight fractured by 'magic' mirrors, the sheen on animal plumage. One can't help but think of Rimbaud's colours of the vowels.

The colour is not always pure in the sense of being of high chromatic intensity however. Clairmont's earlier works employ a complex range, from subtle greys to quite highly-saturated hues. The Auckland City Art Gallery's big Fireplace (1972) which has the inscription 'I used to live in a room full of mirrors, I can hear my train coming' is a sombrely smouldering work using tints of tan, fuschias, faded marigolds scumbled in accents over a dark hessian ground. It says a lot for Clairmont's command of tone that this work generates such a magic light: the whole thing emits a unique posphorescent glimmer!

On the other hand, the marvellous Triptych from Fireplace Series reproduced here (undated but from about the same time), from the collection of the Govett Brewster Gallery, is carried out in colours only slightly heightened from those that might be seen in the natural world under particular conditions.

About two years ago Clairmont moved into a period of looser form and more intense, more simplified colour compositions. In his 1975 Auckland exhibition the passages of colour were applied almost unmixed, darker ground preparations and blackish divisions being used to bring the colour-tones into harmony. Clairmont himself says that this loosening, or even coarsening, of his style was scarcely a conscious process: he was 'surprised' when he looked at the results. (An element of surprise is endemic in Clairmont's work: in the catalogue note to his latest exhibition at the Elva Bett Galleries, Wardrobes, he says: 'I have tried to heighten the element - surprise.' From a psychological point of view, 'surprise' is probably the inevitable accompaniment of the discovery of unexpected contents in the psyche.)

Clairmont has on occasion expressed indebtedness to painters like Grunewald, El Greco, Van Gogh and Max Beckmann. The Auckland exhibition of 1975 included some collages 'inspired by the Munich exhibition (of "degenerate art") of 1937' (an exhibition, be it remembered, that included most of the great names of modern art); and this seemed to cause some reviewers to conclude that Clairmont's exhibition was anachronistic, and that he was merely following in the well-worn paths of German Expressionism. I believe this approach to be fundamentally misguided. It is perhaps based on notions of the development of art that come from thinking In terms of contemporary science, where the 'latest experiment' is supposed to cancel previous research. Art, on the contrary, does not 'progress', nor are genuine artistic intuitions 'outmoded'. Proceeding on different lines from quantitative experiments in the realm of cause and effect, art is in fact the much-needed complementary of science - in a sense its occult side. As Goethe said: 'Art is a manifestation of secret laws of nature which, without it, would remain forever hidden.'

As I said before, Clairmont is still young as a painter. Even the work he has already produced is yet to be properly sorted out and surveyed. I believe that when this is possible he will be revealed as one of the few New Zealand painters who have made a strong and individual contribution in recent years.

PHILIP CLAIRMONT was born in Nelson in 1949, and studied at the Ilam School of Art, Christchurch. His works are in most public and many private collections in New Zealand.