The new works by Victoria Edwards are imbued with a fin de siècle decadence that one associates with the work of someone like Lautrec, a feeling heightened by the open eroticism of the actress-stripper participants and the soft sepia colouring of some of the prints. It is an eroticism that is a little obvious and empty: the photographic image is rarely adjusted by the etching process into potent images.

Colour is used in several ways: as an all-over pattern, as bright individual accents and as dark local touches to emphasise lips and fingers.

The weakest prints are those which we are required to accept as sequences - rather like still frames from a home-movie film, except these do not seem to add up as a group. In a similar fashion the prints that seek to combine a number of images within the frame do not have a cumulative power greater than the sum of their parts. 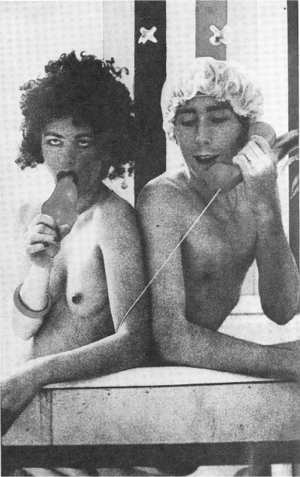 The etchings that are really successful are the large single figures that fill up the entire plate and do not rely on a sequential reading of the set. Particularly so were the prints of the Eighth Set where the 'candid portrait' feel of the actual photograph is amplified and heightened by the graphic medium, the dark intense blacks making for more mystery, more sensuality.

Four small paintings and several collages from 1973 made up this exhibition-a mixed bag even given Clairmont's risky type of painting. The small oil-paintings were very much works in progress, of ideas in flux lacking the assurance of some of his more recent works. Even a familiar subject such as the Study of a Chair does not have the depth of insight and characterisation that we expect of this artist.

Clairmont's imagery in the collages is culled from many sources, most obviously from the history of art. Reproductions are chosen and adjusted by paint in an entirely allusive and free-wheeling manner, the resulting work becoming an evocative and personal statement.

Colour is treated in a quieter, more cohesive manner; tones are closer and delicate rather than raw and discordant, such as we saw in his exhibition of 1975. Clairmont is now showing the broad base of his art.

This is a disappointing exhibition in comparison to her last two showings in Auckland. These new works are small and cosy and lack any cohesive direction. In fact the several different approaches seem to reduce this exhibition to one of almost technical exercises with watercolour.

JOHN PANTING A Retrospective Exhibition This memorial exhibition by a distinguished New Zealand expatriate (1940-1974) consists of sculptures in steel, wood, aluminium, fibreglass, cellulose and silk-screen prints. The exhibition is sponsored by the Queen Elizabeth II Arts Council and the Arts Council of Great Britain; the New Zealand tour organised by the Auckland City Art Gallery. A substantial catalogue is available.

RUSSELL CLARK A Retrospective Exhibition A touring exhibition of about sixty pieces - oils, watercolours, drawings and sculpture - by an artist (1905-1967) who was influential as a teacher around the 'thirties and 'forties and became known for his prolific illustrations. As a painter his work is eclectic to say the least. An excellent catalogue has been published with an introduction by Michael Dunn.